LAWRENCE, Kan. – Kansas was unable to come away with its first Big 12 victory of the season on Saturday against Oklahoma in McCasland Field House. KU captured the first set against Oklahoma, but dropped the final three sets.

The Jayhawks faced an uphill battle against OU in the first set, but caught fire in the second half of the set to claw their way to a tie. KU tallied nine of 14 points to earn the tie at 22-all.

KU earned the 25-23 set victory and capped the comeback with a kill by sophomore Rachel Langs. With momentum on their side, the Jayhawks looked to be in position to do more damage to the third ranked team in the Big 12.

The second set was another nail bitter as KU was within striking distance and were only behind by two points as Oklahoma scored its 23rd point of the set. OU secured the set after capturing the final two points to take the set 25-21.

With the match tied at one-set apiece, Kansas had the opportunity to derail the Sooner momentum from set two, but was unable to thwart the OU attack. Oklahoma earned the final two sets and captured a four-set victory.

Zoe Hill and Camryn Ennis led the Jayhawks with a team-high nine kills, while junior Sara Nielsen finished with a team-best 32 assists and recorded her third double-double of the season with 10 digs.

S4 | Timeout Update: Ennis nets her ninth kill of the match, but OU captures the next two points.

S4 | Jayhawks narrowed the OU lead to one, but the Sooners earned the next three points to force a KU timeout.

S3 | Timeout Update: 𝐄𝐧𝐧𝐢𝐬, 𝐇𝐢𝐥𝐥 each with a team-high six kills at the break.

The freshman takes advantage of the long rally and ties it up at 10 with the kill.

S3 | Langs with her 𝒇𝒊𝒇𝒕𝒉 kill of the match! Jayhawks battling with the Sooners in set three.

S2 | Timeout Update: Hill is the team leader with 5⃣ kills, while Smith and Christon each have 3⃣.

The sophomore gets the kill to give the Jayhawks set one 25-23.

S1 | Timeout Update: OU earns three-consecutive points after the Zoe Hill kill, forcing the KU timeout. Smith responds out of the break with a kill.

S1 | #KUvball out to an early lead over Oklahoma. Hill and Carrier each with a kill. 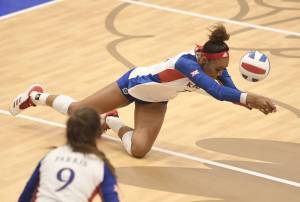 The freshman had a night to remember in the Jayhawks’ last outing against Iowa State. She finished with a career-high 14 kills on the night to lead all Kansas players. 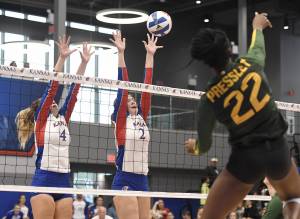 The Jayhawks enter Saturday’s matchup with a 4-8 record overall and an 0-2 record in conference play. This will be the first of two matchups against the Sooners this season with the second scheduled for November 2 in Lawrence, Kansas.