The second set looked much like the first until the Mountaineers were able to swing the momentum and earn its first set victory of the match, 25-20.

Despite dropping set two and falling behind early in the third set to the the Mountaineers, the Jayhawks were able take control of the set late and led by as many as 10 points to take a 25-15 set win.

After falling in the fourth set, Kansas and West Virginia entered the fifth and final set tied at two-sets each. The Mountaineers captured control early with a 6-2 lead, but the HFVA crowd and precision attacks propelled the Jayhawks to a 15-13 set victory.

Sophomore Camryn Ennis led the way with career-high 14 kills on the night, while junior Sara Nielsen logged her fourth double-double of the season with 44 assists and 13 digs.

UP NEXT
The Jayhawks continue Big 12 play at Texas Tech Wednesday, Oct. 16 at 6 p.m.

And we are TIED.

S5 | Kansas gets the point out of the timeout after a block by Ennis and Langs.

Ennis gets the kill for the Jayhawks to give them their first point of the fifth set.

KU wins the third set to take a 2-1 lead on the Mountaineers!

Ennis comes away with another kill to give KU the six-point lead.

S3 | Jayhawks on a 5⃣-0⃣ run. In the run, #KUvball has kills from Ennis and Smith and an ace by Nielsen.

S2 | Smith with a 𝒌𝒊𝒍𝒍! Jayhawks back within four points.

Ennis with the SMASH

Ennis gets the kill to give the Jayhawks a five-point lead over the Mountaineers.

Hill with the KILL

Zoe Hill gets her third kill of the match to give the Jayhawks the early lead in set two!

S2 | Jayhawks and Mountaineers tied early in the set. Nelson recorded with ✌️ aces in the match.

S1 | Ennis with the𝒌𝒊𝒍𝒍 to give #KUvball a two-point advantage.

The Jayhawks push their early lead to 4-0 after the nice block. 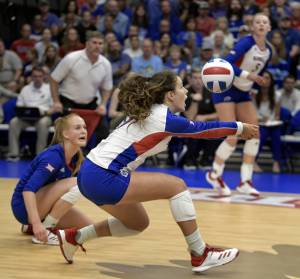 Series at a Glance

The Jayhawks currently hold a 15-1 record all-time against West Virginia, including a 7-1 record in Lawrence. When these two teams played against one another in 2018 KU swept the season series. 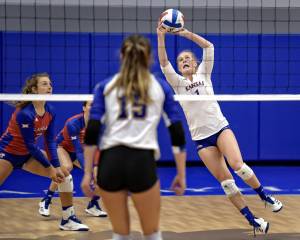 Senior libero Allie Nelson is closing in on the 1,100 career digs mark. The Chicago, Illinois native has 1,090 in her career and is currently 10th in program history.