LAWRENCE, Kan. – No one knew what to expect for the 2021 season after enduring a year full of unknowns and new things following the 2020 softball season being cut short due to COVID-19. After finishing with a 13-13 record in 2020 with no Big 12 record to build off, the 2021 Kansas softball program took to the field for the third season under head coach Jennifer McFalls staring down the 15th-toughest ranked schedule in NCAA softball.

2021 Highlights by the Numbers

The Jayhawks recorded 56 home runs during the 2021 season through 48 games to average 1.17 per game and finish tied for 31st in the NCAA (March 24). This is the second-most in a single season by KU, trailing only the 2011 squad who finished the season with 60 through 53 games. Kansas hit 13 at the 2021 UTSA Classic tournament against UTSA, UT-Arlington and Texas A&M Corpus Christi. 11 different student-athletes contributed at least one home run to the tally on the year: 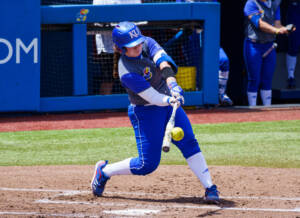 The Kansas defense thrived off the opportunity to record extra outs when opposing teams got runners on. KU finished with 17 double plays turned to average .35 per game and sit 66th in the NCAA. Shortstop Sydnee Ramsey was a key contributor for KU looking to turn two being a part of 12 opportunities. On four separate occasions, KU turned two double plays in a single game: on March 6 against Northwestern State, on March 20 against North Dakota State, on April 24 at Texas and on May 8 against Iowa State. 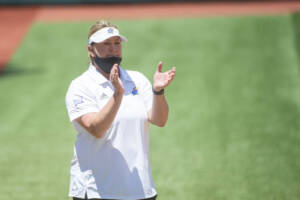 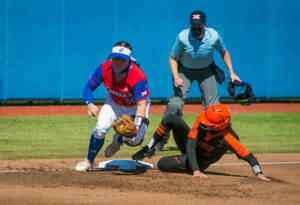 In addition to turning 17 double plays, KU was one of eight Division I programs to turn a triple play this season. The lone triple play came against Northern Iowa on March 13 following UNI loading the basing in the top of the seventh inning. The next batter hit a fly ball to Macy Omli in left field who made the diving catch and was looking to throw the ball in to catch runners attempting to head home on the sac fly. With neither runner on second or third tagging correctly, Omli was able to make the throw in to her cutoff, Miranda Rodriguez, who tagged the runner from second. Rodriguez then made the throw over the Ramsey covering third to complete the triple play.

The Jayhawks upset three top-25 teams over the course of the season – including knocking off Big 12 foe Oklahoma State.

7-4 upset over No. 10 Oklahoma State – Kansas opened Big 12 play with a bang by upsetting OSU at Arrocha Ballpark on March 26. This was KU’s first win over Oklahoma State since April 4, 2015 and the first win in Lawrence since March 30, 2014. KU finished the season as one of only two teams to defeat OSU in Big 12 play – top-ranked Oklahoma being the other.

4-3 upset over No. 18 Missouri – In a midweek matchup in Columbia, Missouri, the Jayhawks captured an upset victory over Missouri in the Border Showdown on April 13. This marked KU’s first Border Showdown victory since April 1, 2009.

5-2 upset over No. 23 Wichita State – Following a complete-game performance in the circle and a career-high nine strikeouts from freshman Kasey Hamilton, Kansas upset Wichita State on April 21 for the second-straight midweek win during the month of April.

As a team, the Jayhawks finished with 337 total hits. Of the 48 games played, seven games were double-digit hit games – including a season-high 17 against South Dakota on March 21. Of the 337 hits, 112 were either a home run or a double, as KU hit 56 of each. 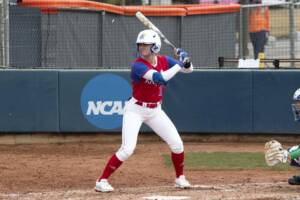 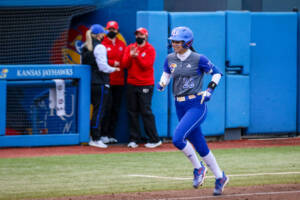 Behind the effort of sophomore Ashlyn Anderson, Kansas finished the season with 237 runs scored. Anderson led the way for the Jayhawks with 32 runs while Ramsey trailed with 30. Eight other athletes finished with double-digit runs scored.