The No. 17 Kansas and No. 2 Baylor matchup on Saturday was exciting for a number of reasons. Not only were the Jayhawks able to hand the Bears their first loss of the season in a 71-58 victory, but Senior Marcus Garrett played his 125th game at Kansas and celebrated his Senior Night.

Originally from Dallas, Garrett came to Kansas and began to build quite the resume.

Starting in 2017-18, his freshman year, he was named Co-Big 12 Newcomer of the Week. He and the Jayhawks also went on to the Final Four of the NCAA Tournament in San Antonio. As a sophomore, he started in 13 of 30 games and was named to the Big 12 All-Defensive Team. In his junior year, he helped the Jayhawks earn their 62nd conference title and earned the Naismith, ESPN and Big 12 Defensive Player of the Year titles.

This season, he is currently in the running for the Naismith Defensive Player of the Year and has been named one of 10 finalists for the NCAA Senior CLASS Award.

Garrett has certainly left his mark on Kansas basketball, but the program just might have left an even bigger mark on him.

“I came here as a freshman not knowing much, I think I had probably only left Texas twice before in my lifetime, so coming here, everything was new to me. From the moment I walked on campus, you all took me in and treated me as family, and made the transition easy for me and I want to thank you all for that."

Garrett took his Senior Night speech as an opportunity to thank everyone who has gotten him to where he is today. He started with his family, specifically his mom. He introduced her to the crowd as she proudly showed off her jersey with the number zero on it. He thanked her for all that she does for him and told her how much he loves her.

He then went on to thank his Uncle Matt. He credits his uncle for teaching him about the sport of basketball, but more importantly, thanked him for showing him how much there is to life. Garrett is from a low-income area and choked up when thanking his Uncle Matt for getting him out.

“He came and grabbed me, he got me out of the hood. He showed me what life really was. He showed me there’s way more to life than just running the streets as a kid,” Garrett said.

As his speech continued, Garrett went on to thank each coach and each of his teammates individually. He talked about how much support he has received from all of them and thanked them for how much they mean to him, with a special shout out to Coach Bill Self. 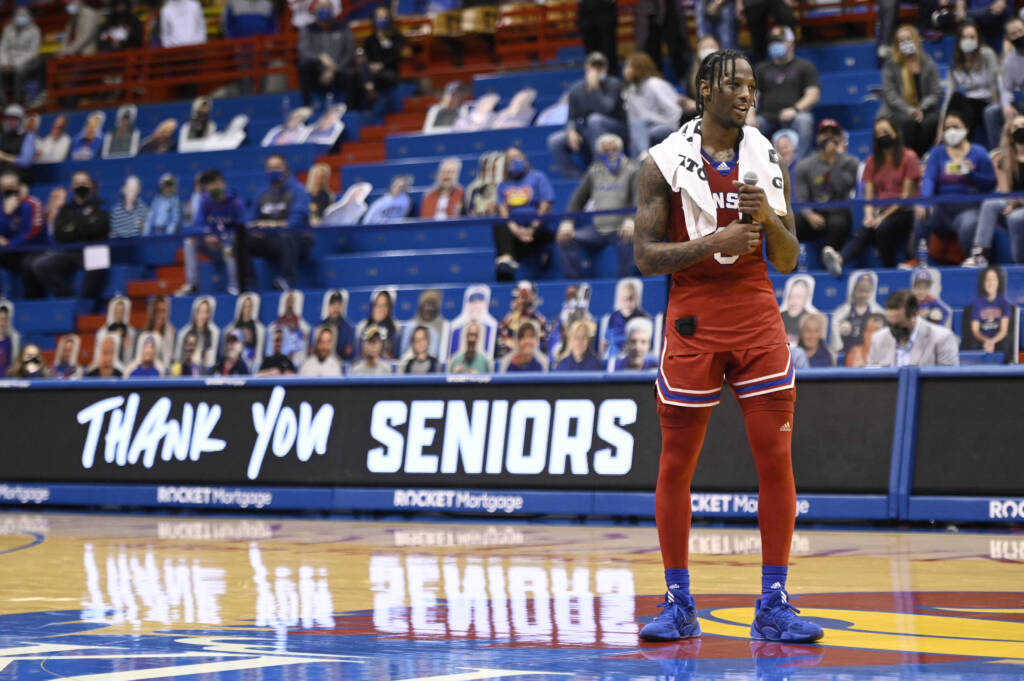 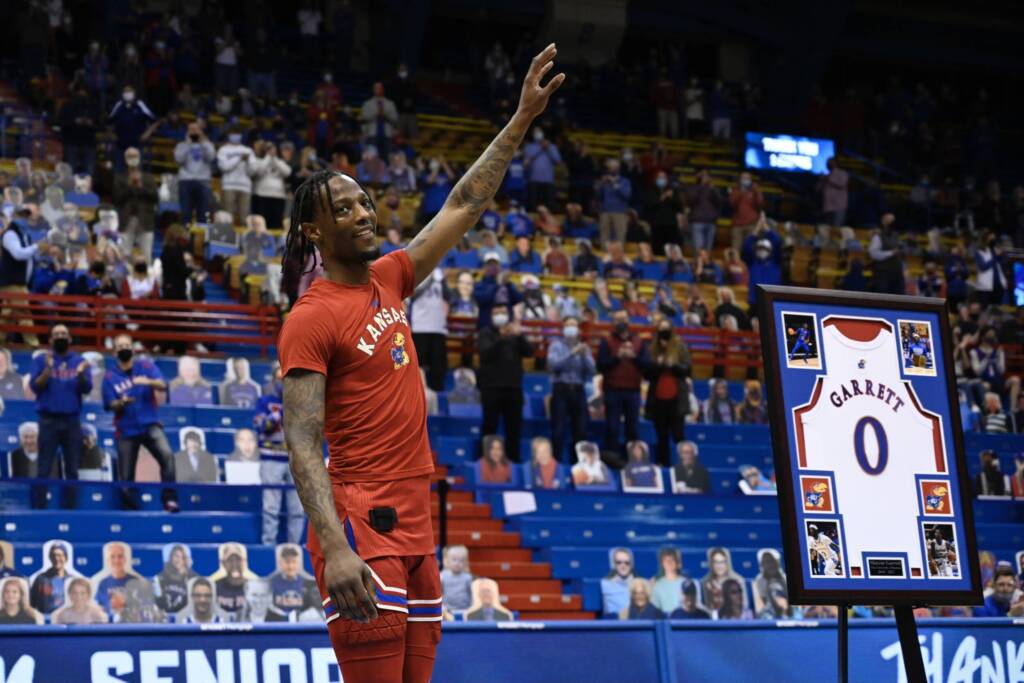 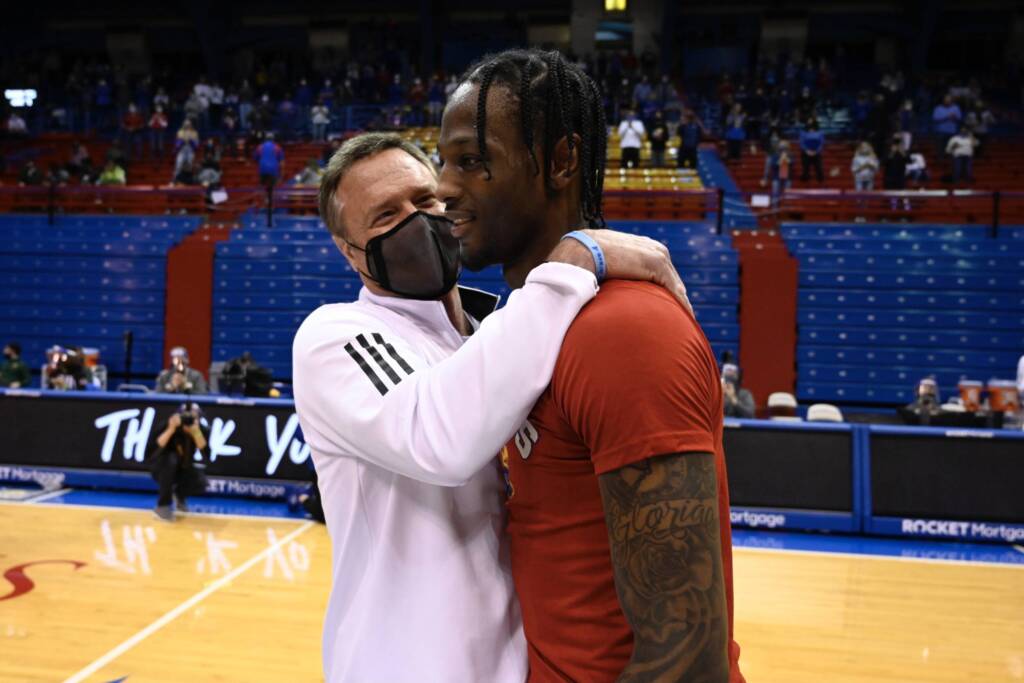 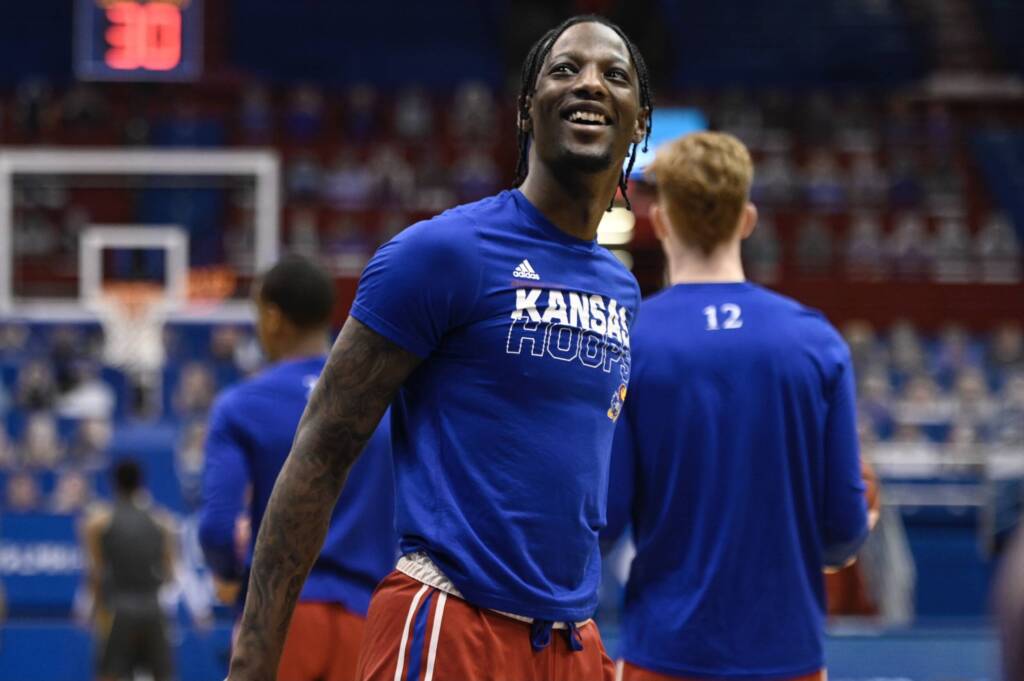 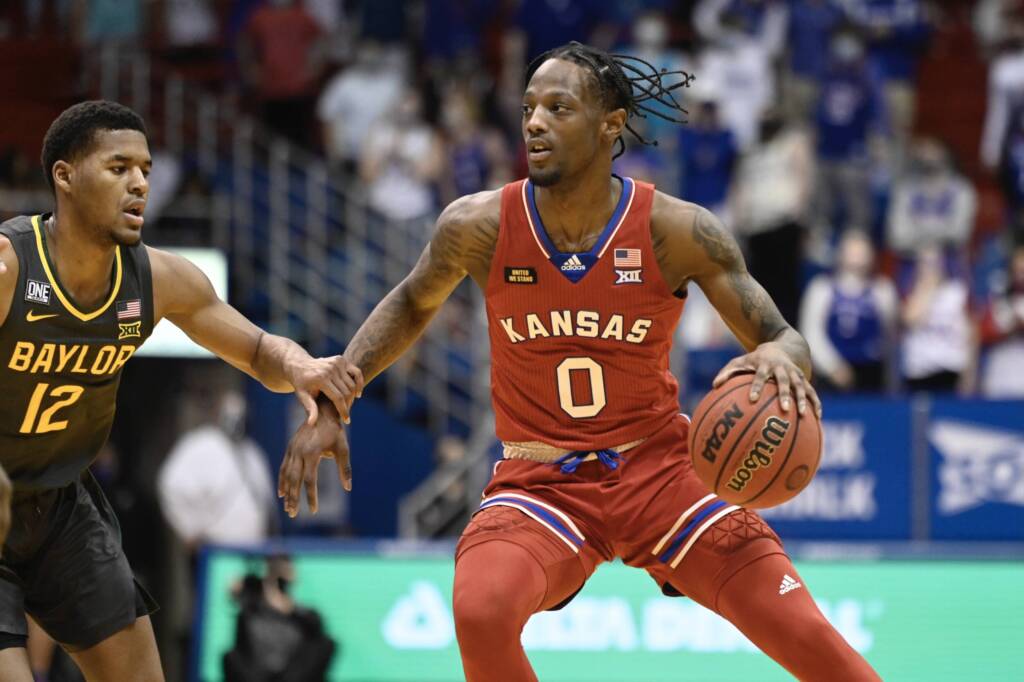 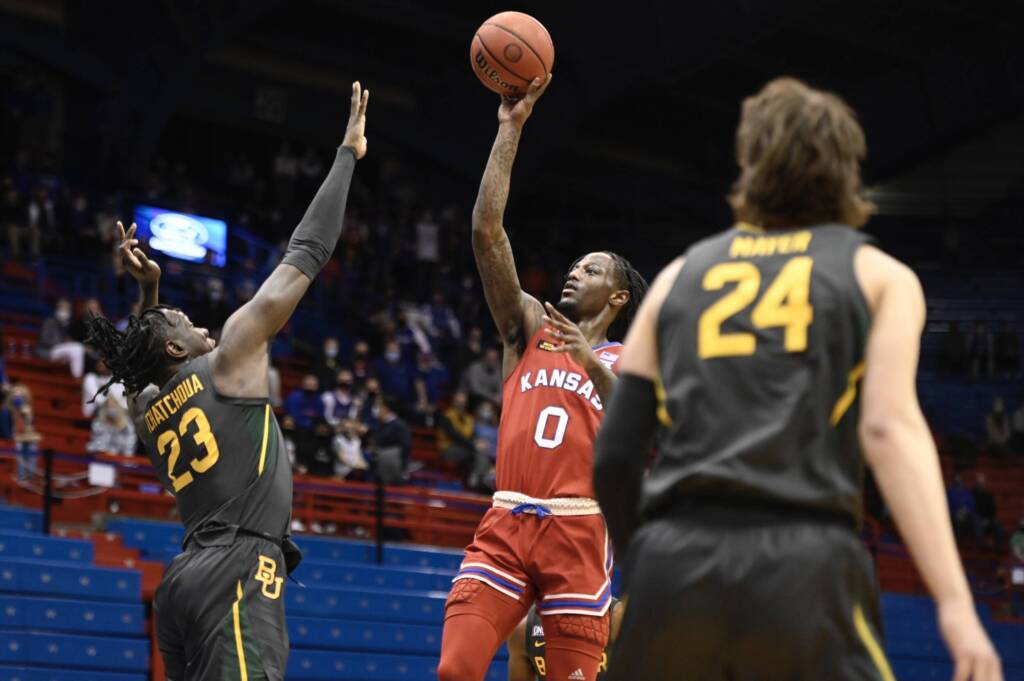 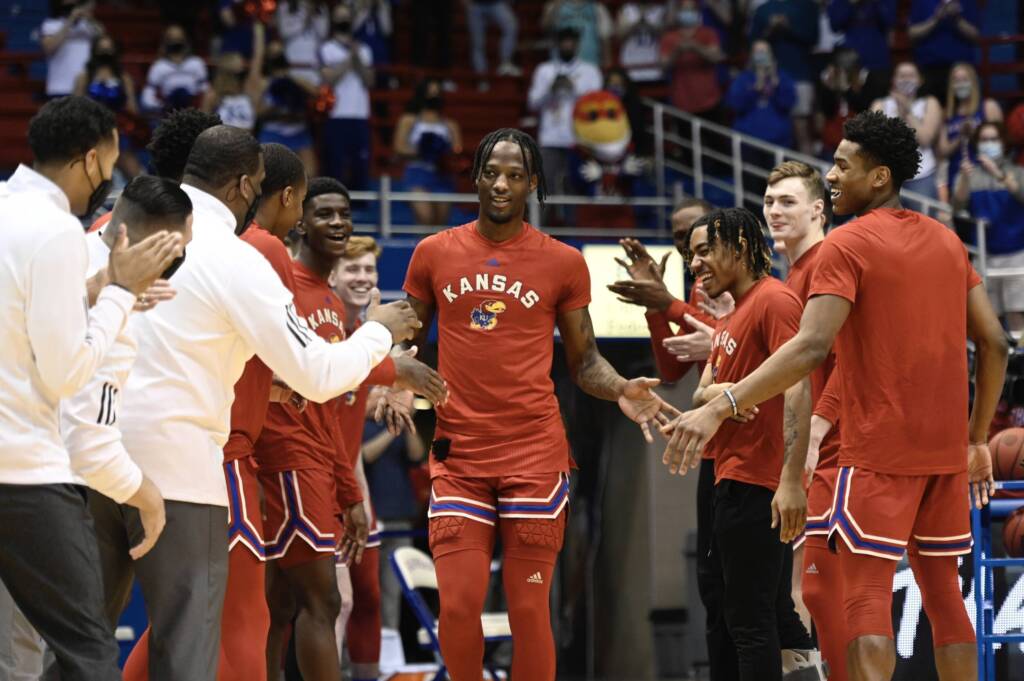 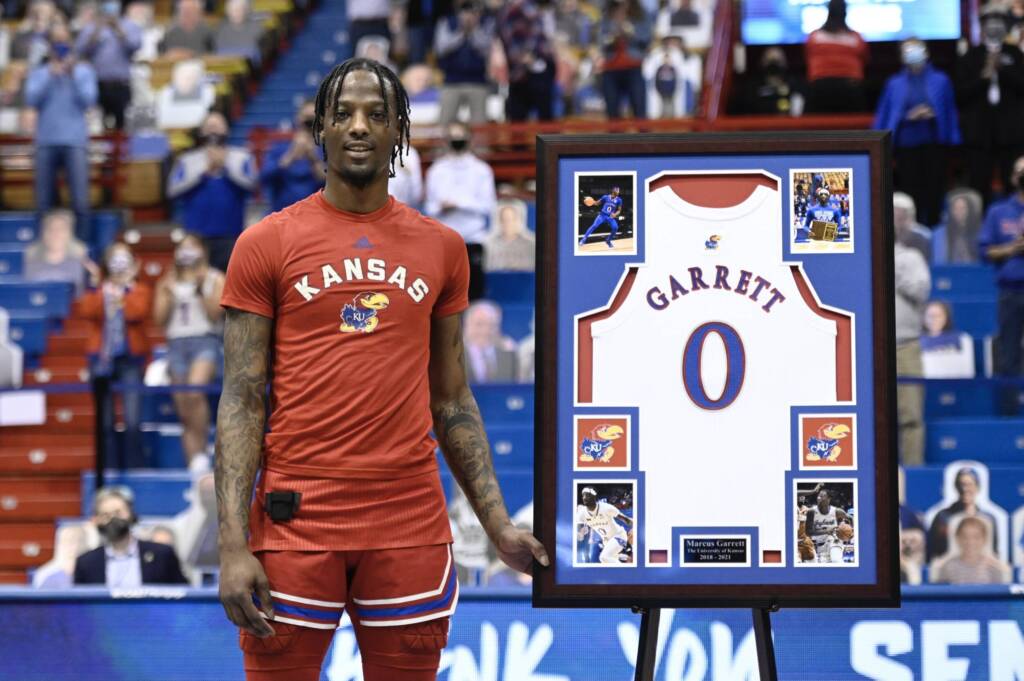 “Coach Self, I don’t know where to start. He changed my life. Coming from where I come from, I’d never really seen the world. Coach Self gave me the opportunity to do that, and I’ll always respect him for that. He probably doesn’t even know this—but I watch everything he does, I really admire him,” Garrett said.

Garrett continued his speech by addressing Jayhawk Nation, thanking them for their constant support.

“I love you all, I love Jayhawk Nation. The way you all make us feel, I don’t think you really understand. You make us feel great. You give us an extra reason to come out here and play for you guys, we hate letting you guys down. I just want to let you guys know that we’ve got a long season and this is not the end of it right here,” Garrett said.

Garrett almost ended the speech there, forgetting to mention the man he planned to save for last, Assistant Coach Jerrance Howard. Howard is the coach who recruited Garrett to Kansas, and he really means a lot to Garrett and his family.

“He knows my background, he knows where I come from and he knows everything back home isn’t so sweet, so he’s always checking on me. We have a relationship that I can’t put into words, but I love him. He treats me like a son, and I love him like a father. Thank you, Coach … and I know you’ll be a great head coach one day,” Garrett said.

Saturday night’s game was special for Garrett, but everyone on the team was able to celebrate the win against Baylor. Junior David McCormack led the team 20 points against the Bears and also had three blocks. Garrett followed with 14 points and seven rebounds. In the second half, the Jayhawks led the whole time. Baylor was only ever able to get within one possession one time, but redshirt freshman Dajuan Harris Jr., had a layup and a 3-point jumper on back-to-back Kansas possessions to increase the lead to eight.

With just over four minutes to go in the game, Kansas had an 11-point lead over Baylor. The Bears attempted to close the gap, but the closest they came was within seven. The Jayhawks’ free throws down the stretch were what pulled them ahead for a 71-58 victory.

After the game, Coach Self was excited about the win, but was perhaps even more excited to introduce Garrett to give his speech and talk about how proud he is of the senior. He mentioned how they were proud of the kid Garrett came to the program as, but they are even more proud of the man he is leaving as. Coach Self always tries to make Senior Night special, and Saturday was no exception.

“We say on Senior Night—and we say it every year—that no matter what happens tonight, it is our responsibility to make sure that our seniors go out in style. Give it up—and I don’t care about what the awards say at the end of this season—to the best defensive player in America, Marcus Garrett,” Self said.

It is safe to say that ending regular-season conference play on a resounding victory against Baylor, bringing them their first loss of the season, is pretty stylish.