🏀 A Year to Remember: 2021-22 Kansas Women's Basketball Year in Review

Kansas Women’s Basketball had a record-setting season in 2021-22 under the leadership of Big 12 Coach of the Year Brandon Schneider. The Jayhawks finished with an overall record of 21-10 and placed fifth in the Big 12 with an 11-7 conference record. Kansas experienced its 22nd 20-win season in program history and first since 2012-13.

The Jayhawks opened the season 4-0, rolling to victories over SIU-Edwardsville, Tennessee State, Omaha and Saint Louis at home by an average of 28.3 points per game. A Thanksgiving weekend visit to Las Vegas for the South Point Shootout, where KU would face suffer its first defeat, falling 68-58 to No. 11/10 Tennessee, before blowing out UTEP, 81-55, to close out the month of November with a 5-1 record.

Following a 75-44 rout of UTRGV to improve to 6-1, the Jayhawks welcomed Vanderbilt to Allen Fieldhouse for the Big 12/SEC Challenge. KU trailed the Commodores by nine at halftime, but used an 11-0 run in the third quarter to regain the lead and held on for a 74-67 victory. The Jayhawks would close out non-conference play with wins over Santa Clara and at Wichita State to enter Big 12 play with a 9-1 record. 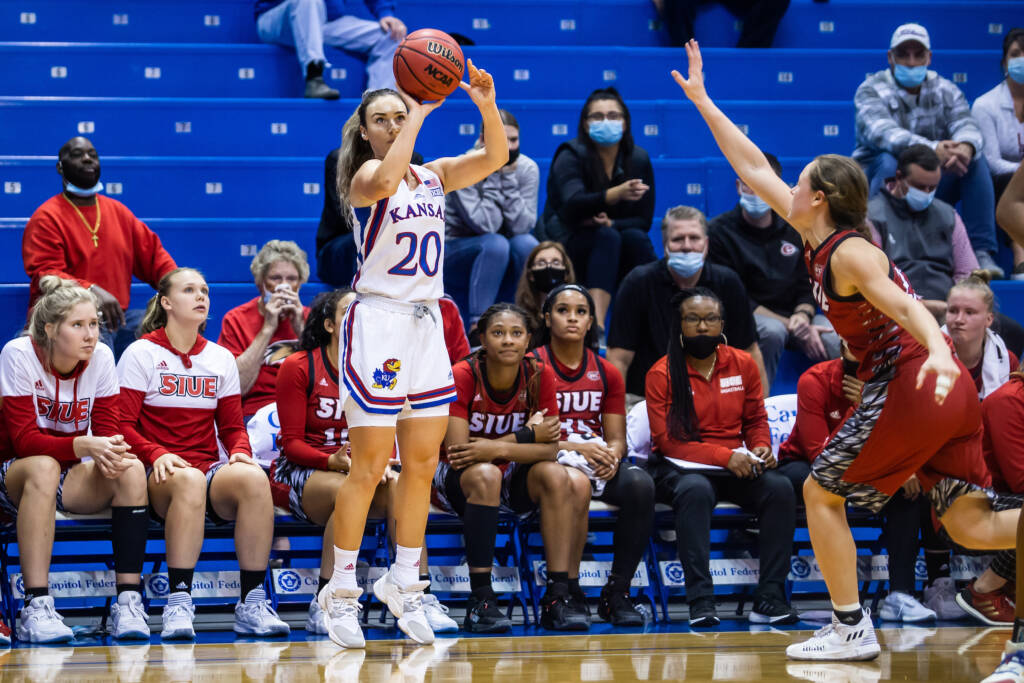 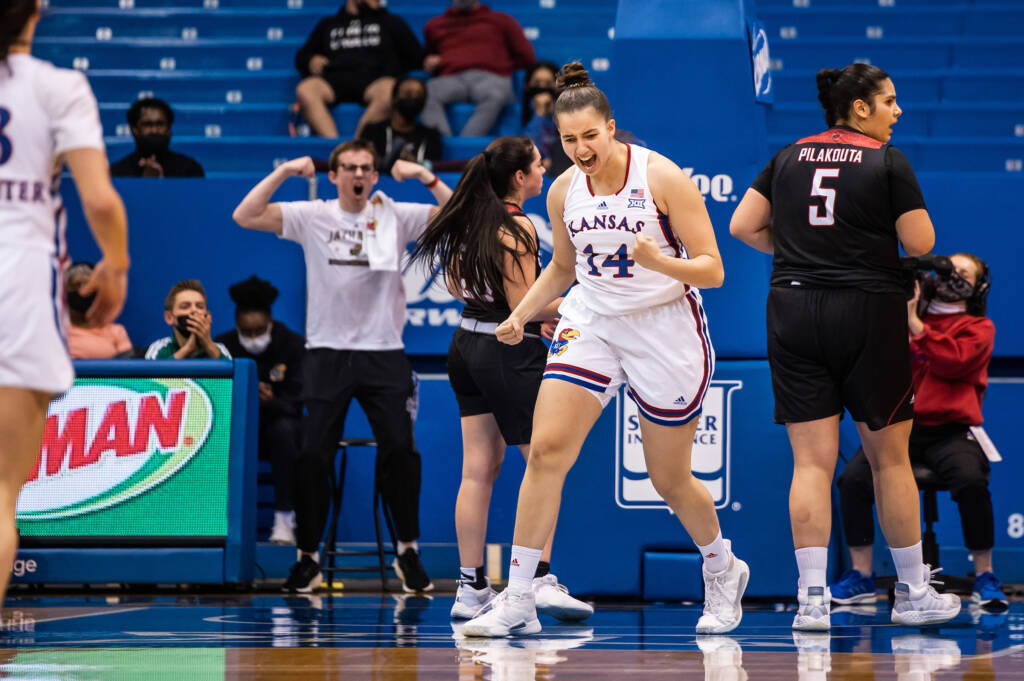 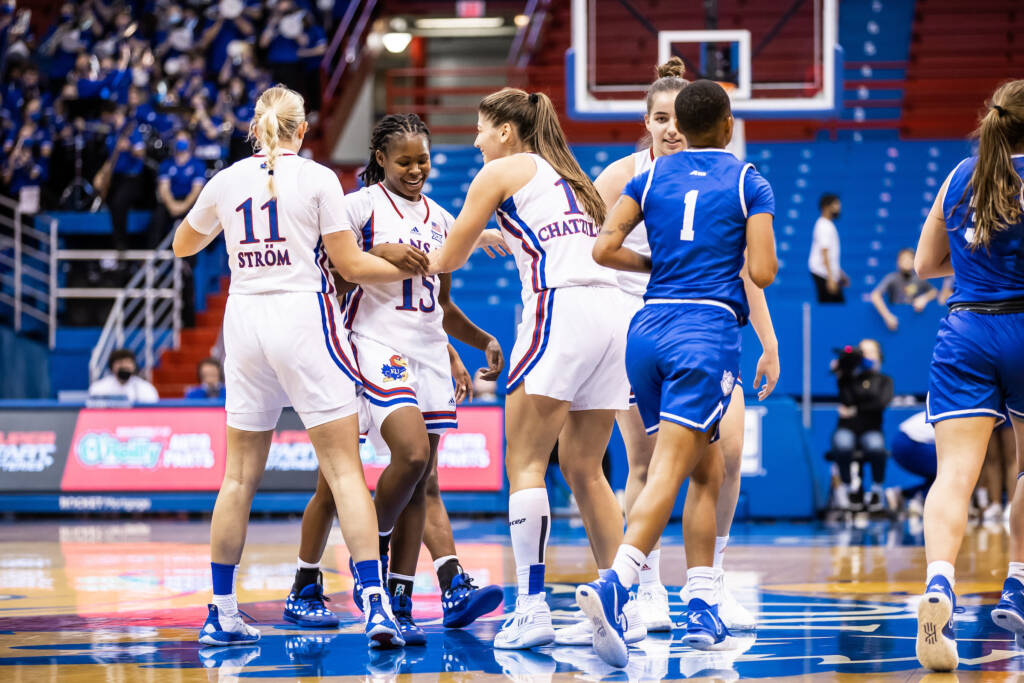 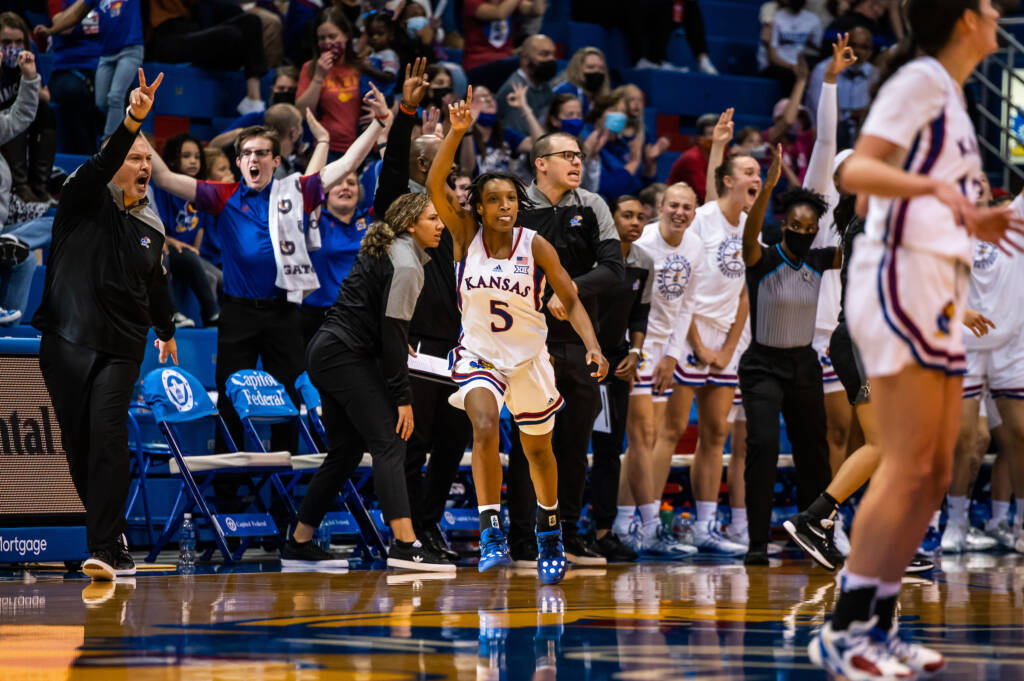 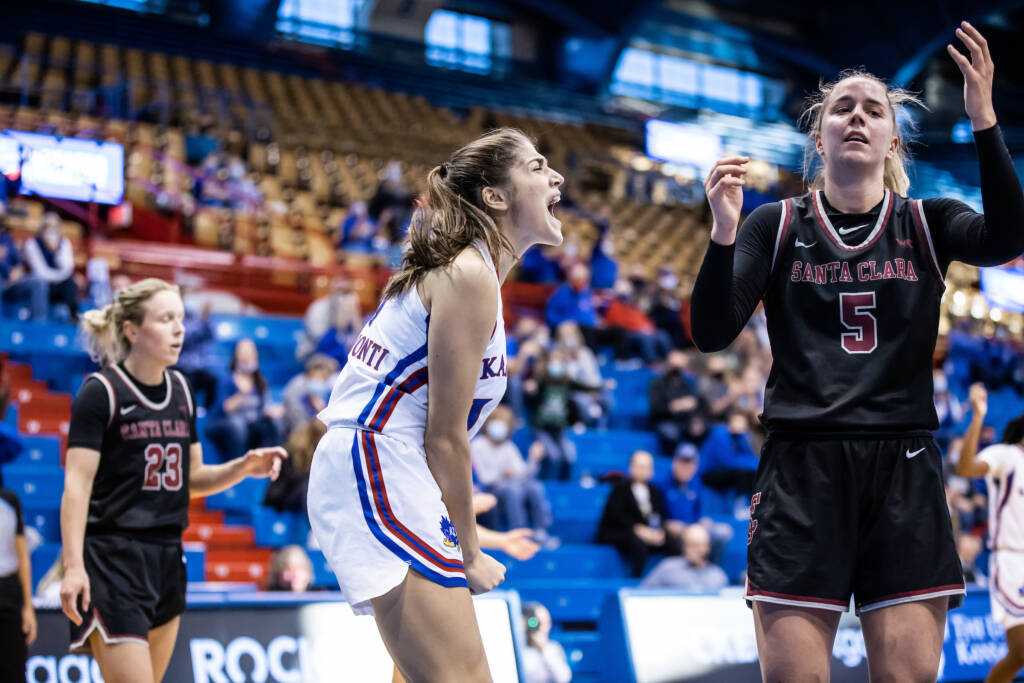 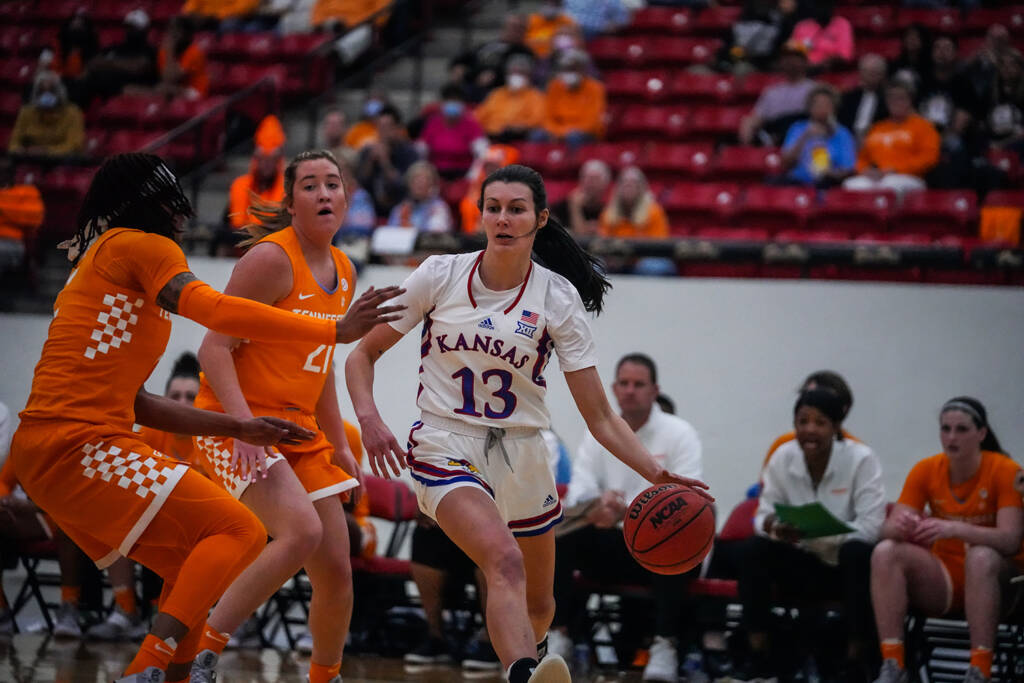 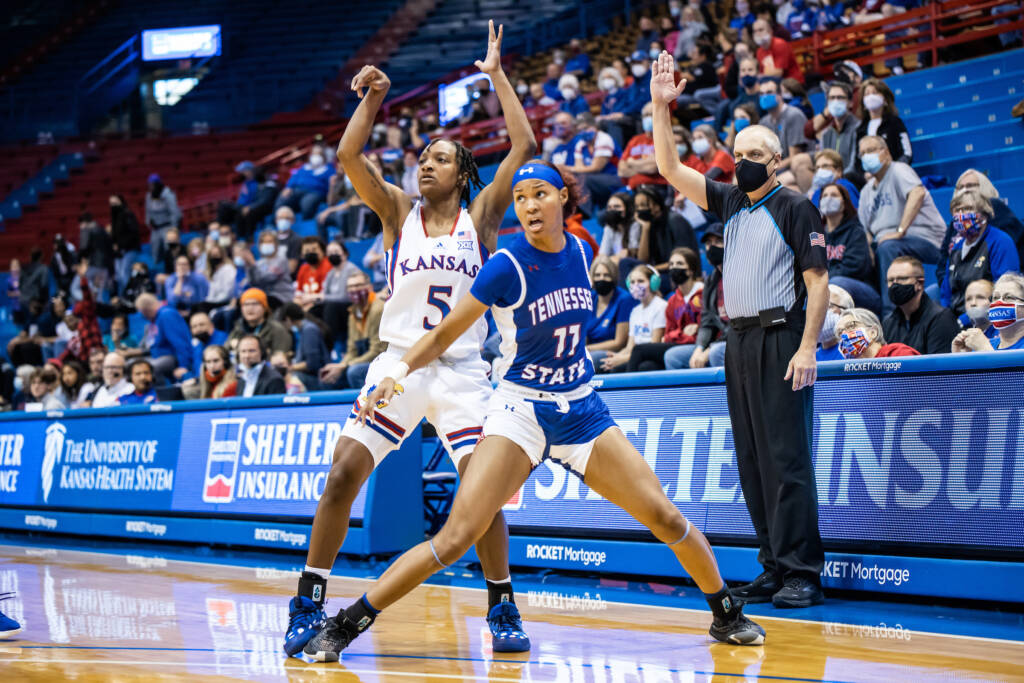 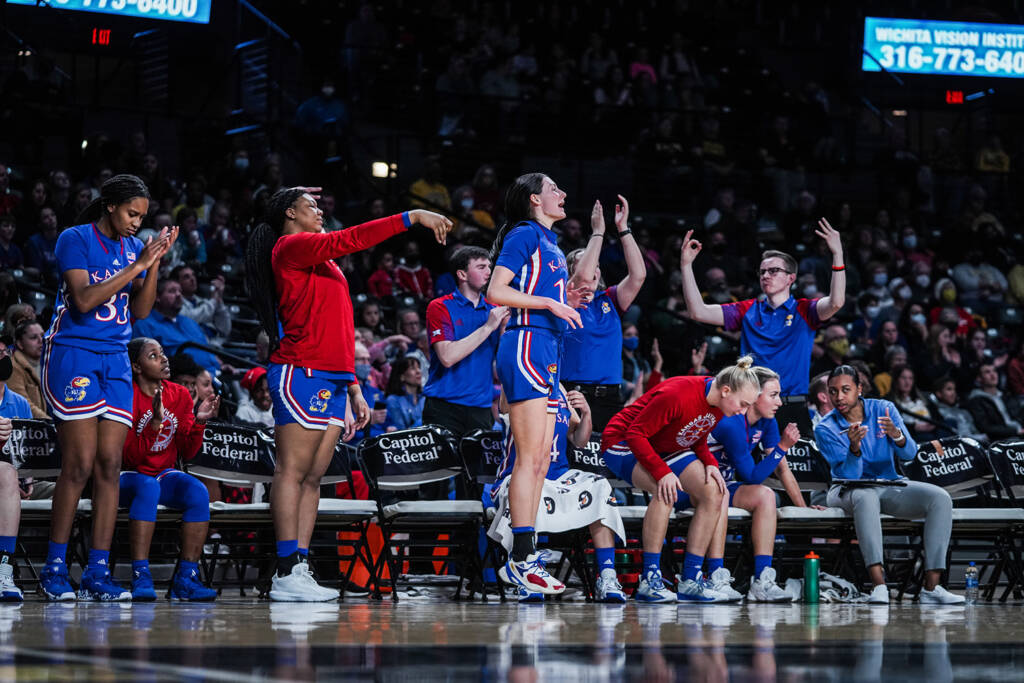 Conference play started against No. 23/25 Oklahoma as the Jayhawks ended a 17-day COVID break that stretched through the holiday break. KU led the Sooners by as many as 16 points in the second quarter, but ran out of steam in the second half as OU pulled ahead for an 82-68 win. Undeterred, Kansas went to Texas and earned back-to-back road wins by defeating TCU 78-72 and No. 13/12 Texas 70-66 in overtime. The win at Texas marked KU’s first road win over a Top 25 opponent since 2012.

A tough stretch of play followed as the Jayhawks faced three teams either ranked or receiving votes in the national polls over the next four games. KU went 1-3 in those games, falling to 3-4 in Big 12 play heading into a trip to Stillwater, Oklahoma, to face Oklahoma State.

Holly Kersgieter recorded a double-double with 17 points and 14 rebounds in her home state as she led the Jayhawks to a 68-54 victory at OSU, which evened KU’s record in Big 12 play to close out the month of January. Kansas also snapped a streak of nine straight defeats at Gallagher-Iba Arena as it won in Stillwater for the first time since 2012. The Jayhawks would again face OSU just days later and completed the season sweep with a 65-56 win on February 2nd at Allen Fieldhouse.

Kansas would continue its winning streak with a 75-60 win over TCU, completing a regular-season sweep of the Horned Frogs for the first time since 2013. Another milestone followed the next game as KU went to Morgantown, West Virginia, and claimed its first road win at West Virginia since 2013, defeating the Mountaineers 65-47 to improve to 16-5 on the year and 7-4 in Big 12 play.

The Jayhawks brought a four-game winning streak into the Dillons Sunflower Showdown at Allen Fieldhouse. After trailing by two at halftime, KU used a 16-0 run to seize control of the game in the third quarter before a long KSU run tied the game at 45-all with 6:01 to play. From that point, the Jayhawks closed the game on an 18-6 run and to claim the 63-51 victory and a season split with the Wildcats. Victories over West Virginia and Texas Tech would follow as KU swept each team during the regular season and extended its longest conference winning streak since 1997 to seven straight games.

Kansas would face four consecutive Top 25 teams to conclude the regular season, including three straight games against Top-10 ranked opponents. The Jayhawks suffered defeats to No. 9/6 Iowa State, No. 5/7 Baylor and No. 9/10 Texas before closing out the regular season with a 73-67 triumph at No. 19 Oklahoma. The win in Norman sent the Jayhawks into the postseason with 20 wins for the first time since 1999-2000 and gave KU sole possession of fifth place in the final Big 12 standings.

Postseason play began in Kansas City, Missouri, as the Jayhawks earned a Big 12 Quarterfinal matchup against the same Sooners they played to close out the season. OU would win the rubber match of the season series, 80-68, but with 20 wins and a top-five conference finish, the Jayhawks had enough of a resume to go into Selection Sunday confident they would receive an NCAA Tournament berth for the first time since 2013.

When the bracket was unveiled, KU was tabbed with the No. 8 seed in the Spokane Regional and a trip to Stanford, California, on the tournament’s opening weekend. The Jayhawks were matched up against Georgia Tech out of the ACC in the first round, with the 21-10 Yellowjackets earning the No. 9 seed in the regional.

After scoring the first 10 points of the game, Kansas had to weather a long Georgia Tech run, one that left KU trailing 22-13 at the end of the first quarter. KU closed out the first half on a 14-3 run and led 34-31 at halftime. The Jayhawks took full control of the game in the third quarter, outscoring GT by nine points and KU led by double figures for nearly the entire fourth before ultimately advancing to the second round with a 77-58 victory.

The Georgia Tech win was KU’s 21st of the season and it’s the largest margin of victory for a Kansas women’s basketball team in the NCAA Tournament. The Jayhawks have now won three straight NCAA Tournament openers and KU is 10-4 all-time in the first round of the tournament.

With the win, KU advanced to face the top-seed in the Spokane Regional, No. 2-ranked Stanford, in the second round. The Jayhawks pushed the defending National Champions, trailing by two at halftime and remaining within six midway through the third quarter before Stanford pulled away during the final 15 minutes of the game for a 91-65 victory. Stanford would go on to win the Spokane Regional and advance to the Final Four.

Taiyanna Jackson and Zakiyah Franklin both received All-Big 12 Honorable Mention honors, while Jackson was selected to the Big 12’s All-Defensive Team, becoming the first-ever Jayhawk to earn a spot on the team.

During the 2021 fall semester, the Kansas Women’s Basketball team set a new program record with a 3.44 team GPA.

Franklin moved into 10th place on KU’s career list for assists late in the season. She’s currently No. 10 on the list with 318 assists. Franklin also turned in the third-best free throw shooting season in program history this year, hitting 85.6% (101-of-118) of her attempts from the line.

Kansas also set a new single-season school record for free throw percentage, shooting 75.4% (478-of-634) from the stripe as a team.

KU had the second-best field goal defense in school history during the 2021-22 season, holding opponents to 36.6 percent shooting for the year.

Kansas had two players surpass the 1,000-point milestone for their careers in super-senior Julie Brosseau and Kersgieter. Brosseau departs Lawrence with 1,072 career points spread across stops at three schools, while Kersgieter will enter her senior season ranked 24th on KU’s all-time scoring list with 1,103 points to her credit.