Freshman guard Bryce Thompson had been out of action for almost six weeks this season due to injuries, but on Thursday night, he was ready to go out and help the Kansas Jayhawks get a 97-64 victory over the Iowa State Cyclones. To say he was excited to be back on the court is an understatement.

“I’ve been away from the game for so long and to get back out there, just to compete, to win and to hear the crowd. Those are all the little things you take advantage of or take for granted when you’re playing. It definitely felt amazing,” Thompson said.

The Jayhawks went into Thursday night’s game coming off of a win against Oklahoma State on Monday, February 8. Against Iowa State, the Kansas team appeared to be more confident on the court. They had good control of the ball, confidence in each other and more consistent shooting.

Thompson was able to help the Jayhawks both offensively and defensively on Thursday. In his 20 minutes of play, he had eight points, four rebounds, three assists and two blocks. Part of Thompson’s responsibility when on the court is to play some point-guard. He gets the ball moving and feeds the shooters on offense, which on Thursday was easy to do, as many of the Jayhawks had found their offensive rhythm.

Kansas had four of its five starters score in double-digits against the Cyclones. Junior Ochai Agbaji led the team with 19, followed by sophomore Christian Braun with 18, redshirt freshman Jalen Wilson with 16 and junior David McCormack with 12. With the starters on an offensive roll, Thompson just had to keep them going.

“I love seeing them going up, getting them all up shooting, and that’s when I was able to penetrate and get them the ball because they were hot and you’re supposed to feed the fire—which I did. I’m very happy for them,” Thompson said.

Thursday was a good team effort game. They players were working well together and feeding off of each other’s energy. Passes were being made, the team was rebounding, and playing with intensity. In addition to his 16 points, Wilson was able to pull down 11 rebounds for his third straight double-double and sixth of the season. When asked what Thompson brought to the game, Wilson was quick to come up with an answer. 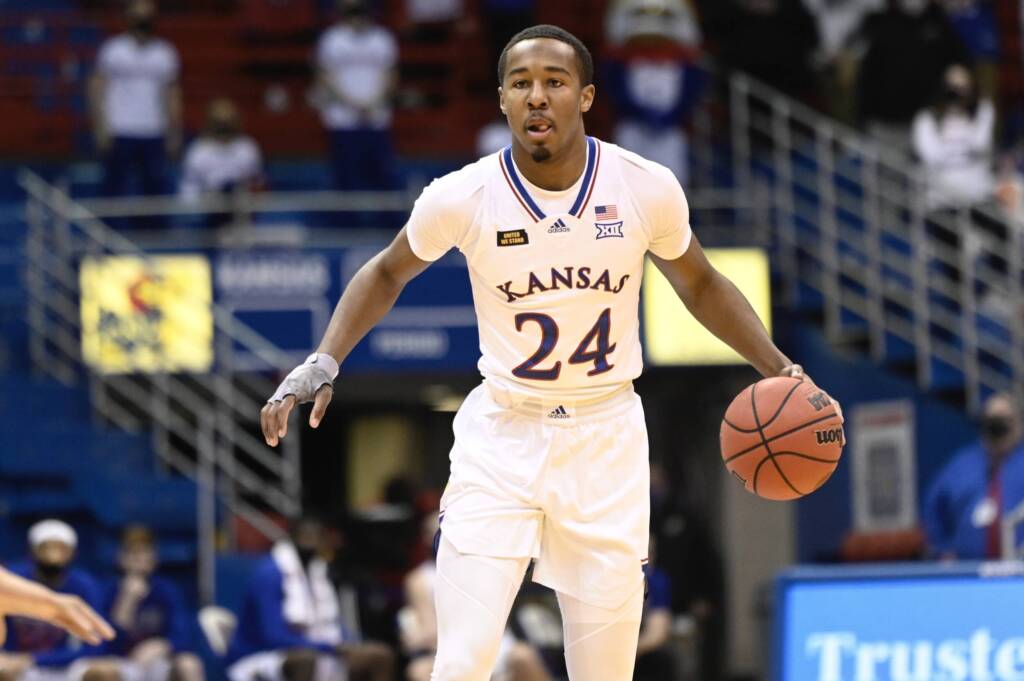 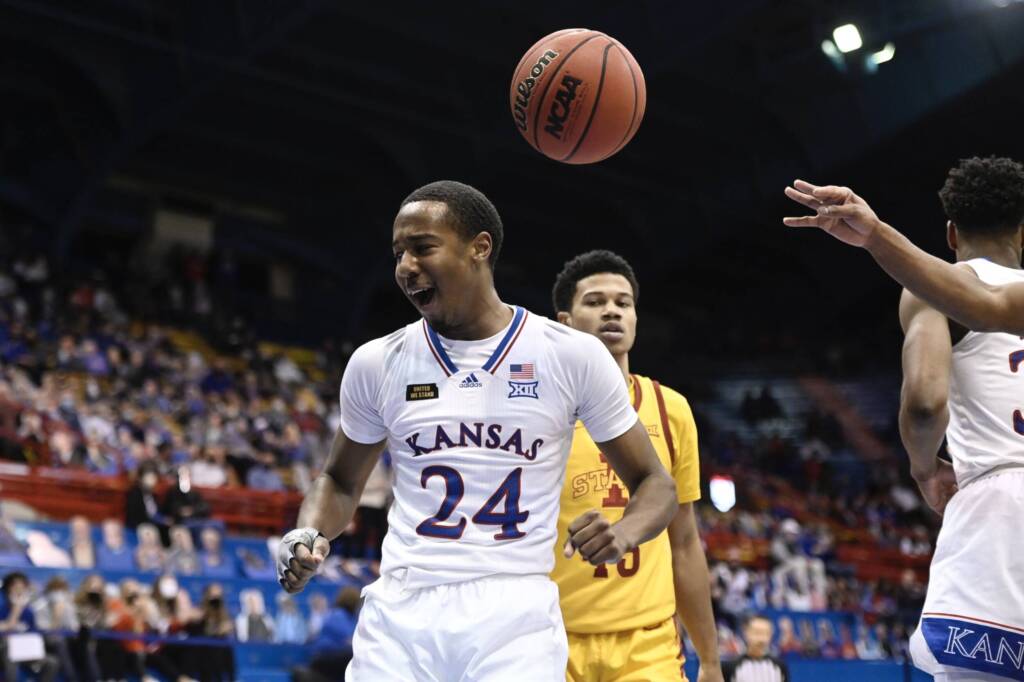 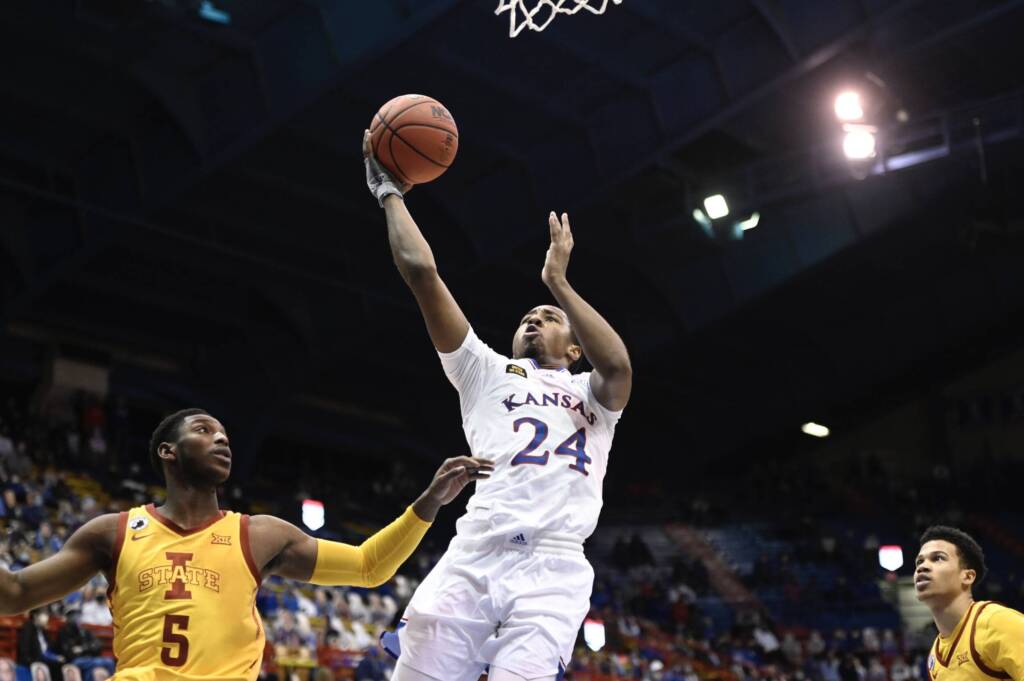 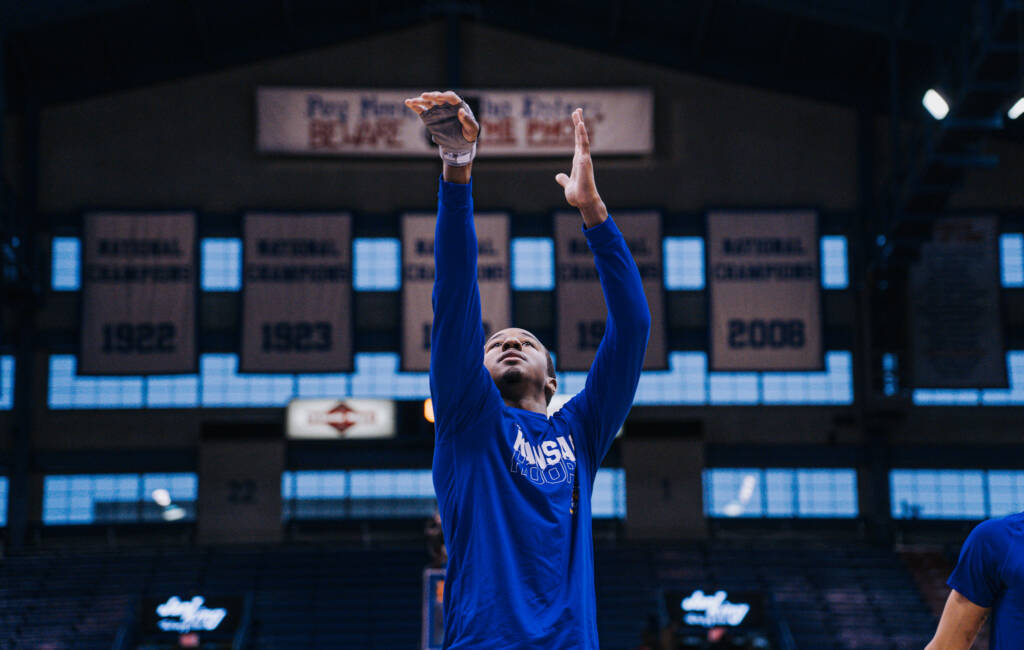 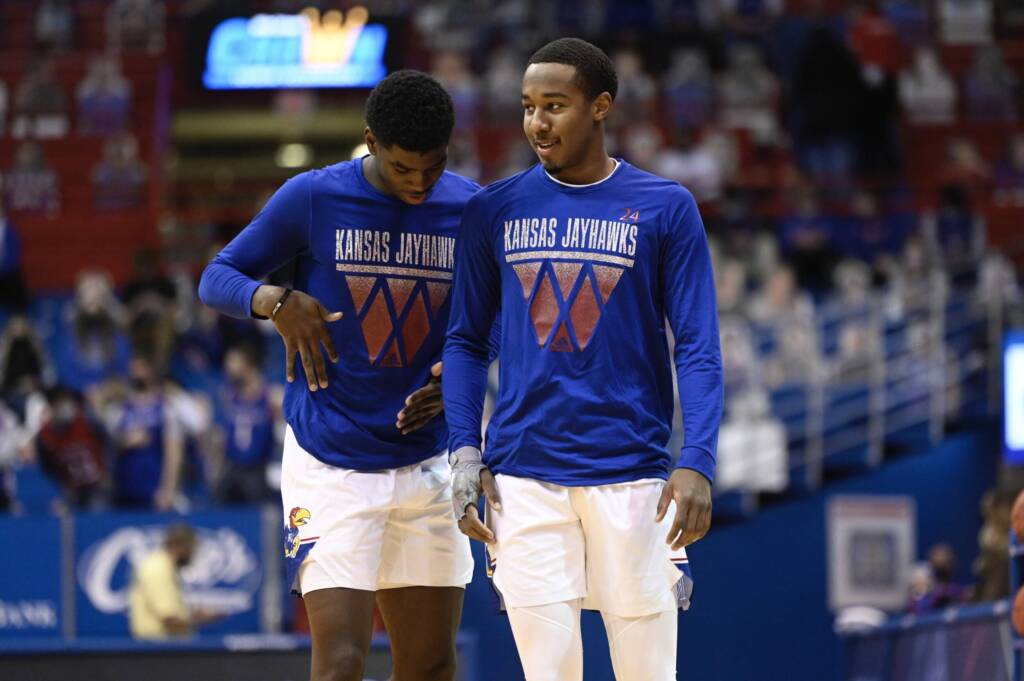 “He gave us great energy. We’ve been missing him the whole season so him coming in very confident and playing the right way, being aggressive and making the right plays were all things we definitely needed. We’re happy that he’s back,” Wilson said.

The team was missing Thompson during his time off for injury, but the time off was just as hard for Thompson. The hand injury came in the game on January 12 against Oklahoma State. It was Thompson’s first game back after coming off of a minor back injury. He went in for a loose ball and heard something pop in his hand.

“It just kind of crushed me. That was my first game back from my minor back injury, so it was tough, but I just kept God first and just stayed grounded. I have a good support system that they kept uplifting me, and I’m very thankful for them because that was a tough time for me,” Thompson said.

Thompson had surgery on his hand and has been doing treatment to get back to normal. His body is still adjusting, but the practices this week and playing on in the Iowa State game has Thompson feeling good and confident.

“It feels good! I’m still doing treatment every day, trying to get it all the way back, but it’s good, I can play,” Thompson said.

With Thompson back and ready to play, and the Jayhawks catching some momentum, they now look forward to playing the Cyclones again. The second of these unique back-to-back matchups between Kansas and Iowa State is on Saturday, February 13, this time in Ames. It’s a quick turnaround, but the team is ready and excited to play.

“It’s just a good opportunity for us to go up there and get another one, and hopefully develop some momentum,” Coach Self said.