Among the 56 games slated for the 2016 season, Kansas will play 13 games against teams who competed in the 2015 NCAA Tournament, including five games against NCAA Super Regional teams and three against College World Series (CWS) participants.

“We feel that with the experience our young team received a year ago, we are in a good position to have a chance to get back in the NCAA Tournament,” head coach Ritch Price said. “I really like the series we have at home and how the conference schedule sets up. If we can take another step in the development of our younger players, it will create some opportunities for this club moving forward.”

Uncharacteristic of years past, the Jayhawks will try to open up the season with a home series against Northern Colorado following a day trip to Arkansas Little Rock, before flocking to Arizona for the Big 12/Pac-12 Challenge.

Those first two weeks in March, Kansas will play a three-game set against BYU (March 3-5) and one game against Creighton (March 8), before hosting the Millard Management Classic with the likes of North Dakota (March 11), St. Louis (March 12) and Purdue (March 13). The Jayhawks close out the nine-game homestand with two contests against Murray State (March 15-16) to garner final preparations before their trip to Palo Alto, California.

“We are rolling the dice, there is no doubt about it,” Price said of the early March home games. “Hopefully we will get an early and nice spring weather-wise and we can get those games in. We feel like we have traveled so much in the past that we are hurting ourselves by not playing a lot of home games. If those early games are unplayable we may have to get creative and move those series south.”

Perhaps the trip circled on everyone’s calendar, especially for the 11 players from the state of California on the Kansas roster, is the one to Sunken Diamond, where the Jayhawks play three games at Stanford (March 18-20). That weekend proves to be the final non-conference matchup before KU opens up Big 12 Play at the Hog.

“We always try to put two special non-conference weekends in our schedule,” Price added. “Certainly the Big 12/Pac-12 Challenge at the Major League (Baseball) sites is one of the great venues in the country you get to play in and then for the last 30 years, you can make the argument that Stanford is the best college baseball program in America. With all the California kids on our roster, it is always exciting for those young men to go back and play in their home state at one of the greatest college stadiums in America.”

Kansas returns home to open up conference play with West Virginia (March 25-27) and play a single game against Super Regional participant Missouri State. The Jayhawks then hit the road April 1-3, to take on Baylor and then wrap-up the home-and-home with Missouri State April 6.

April 8-10, KU finds itself back at Hoglund Ballpark to host CWS participant TCU for a three-game set and then head South to Austin, Texas, to face the Longhorns (April 15-17). Other big conference weekends include Oklahoma (April 29-May 1) and Texas Tech (May 6-8) at the Hog and Kansas State (May 13-15) and Oklahoma State (May 19-21) on the road.

Outside of the rugged Big 12 schedule, Kansas has the unique opportunity to renew an old rivalry when it takes on Nebraska in the College Baseball Hall of Fame Game at Kauffman Stadium April 27. The Jayhawks and Corn uskers will meet in mid-week fashion with Kansas holding a perfect 5-0 mark at Kaufmann Stadium during Price’s tenure.

“We are really excited to be invited to play in the College Baseball Hall of Fame Game at Kauffman Stadium,” Price said. “It is certainly something our players and kids form the Midwest will love. You grow up going to games at Kauffman Stadium and to walk on that field – it is pretty special to those kids. I thank the Kansas City Royals for inviting us and we are certainly looking forward to renewing that great rivalry we had with Nebraska when they were a member of the Big 12.”

This year, the Phillips 66 Big 12 Baseball Championship is scheduled to begin May 25 at Chickasaw Bricktown Ballpark in Oklahoma City, Oklahoma. The tournament will utilize a double-elimination format with the champion earning the conference’s automatic bid to the NCAA Tournament.

Each home game of the 2015 season will be available to watch live on the Jayhawk Television Network (JTV), which is a compilation of ESPN3, Time Warner Cable SportsChannel, Comcast, Cox Communications and Wow! that reaches over 95 million homes. For more information on JTV, please visit KUAthletics.com/TV.

In addition, thanks to a new agreement between Jayhawk IMG Sports Marketing and Lean Stream, fans can listen to every game for free live online at KUAthletics.com/Radio or on the Kansas Jayhawks official mobile app for iPhone and Android devices. 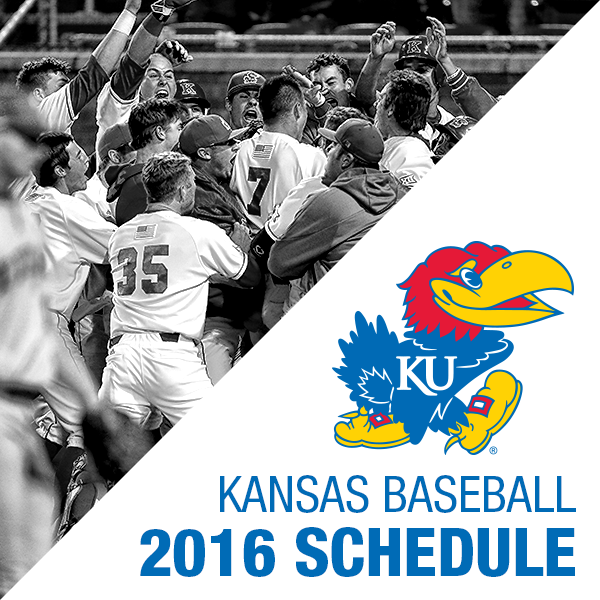