As young athletes, we always look up to the best of the best and want to be just like them. No matter the sport you play, you have these heroes you aspire to be like when you grow up.

For me, those ‘heroes’ were Olympians. Competing for your country, chasing after gold — it all sounded like everything I’ve always wanted to do.

Who would have thought I’d be one of them?

I can’t even tell you for how long I’ve dreamt about putting on that red, white, and blue jersey. Even with the day nearly upon me, you’d have to pinch me to convince me I’m not still dreaming.

That’s the one thing that excites me more than anything else: representing my country and going after medals. Not so much as an individual, but I’m chasing the big prize of adding to the total medal count. There are not a lot of opportunities to wear that Team USA jersey on a stage like this.

I promise not to waste mine. 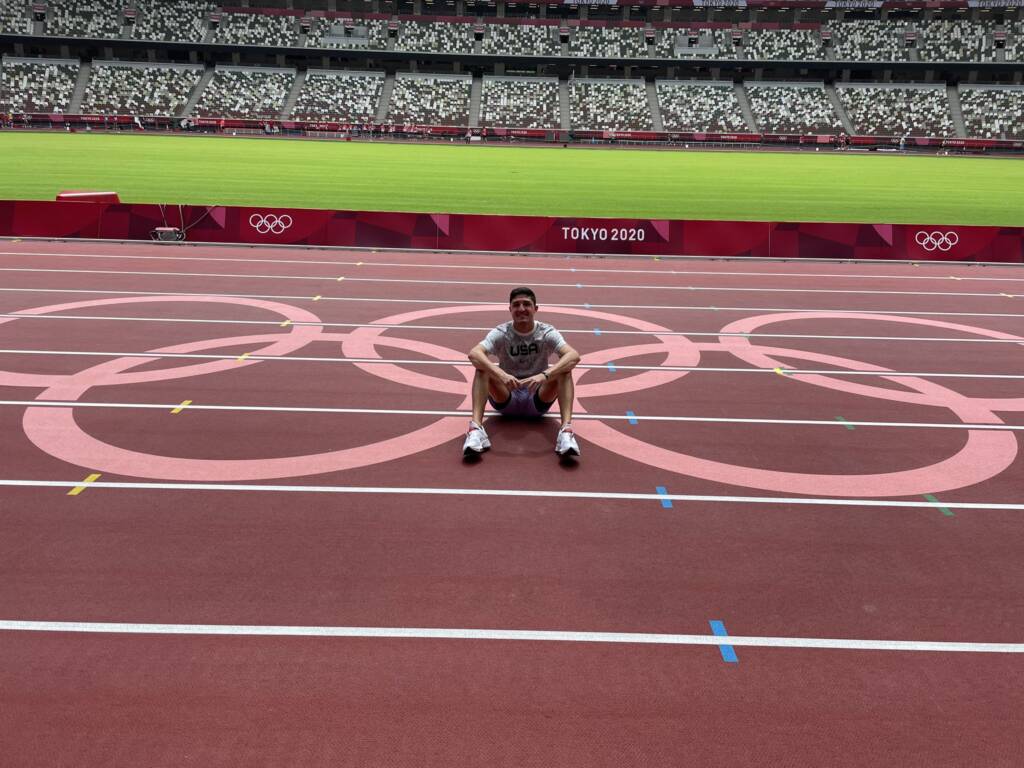 The lessons from defeat

This is the new pinnacle of my career.

There was a time when it was making it to the NCAA championships. It kind of feels the same in the fact that I’ve devoted everything to accomplish this goal—my time, my body, and my mind.

This means the world to me.

Sure, some things do compare, but as I get ready to compete in Tokyo, it’s definitely an entirely different experience as well. Things change when you’re competing against the best in the world. It’s kind of intimidating, yet exciting all at the same time.

But I’ve always been the kind of person willing to push and challenge myself to see exactly how far I can go. It isn’t like I have much of a choice.

At this level, they’ll bring it out of you.

I believe one of the things that gave me the determination and drive to make it here was missing nationals as a freshman at the University of Kansas. It’s one thing to just completely blow a time, but I only missed that opportunity by .06 seconds.

So, I’ve felt the sting of defeat—maybe not at the Olympic level but certainly at the collegiate level. And it was tough.

You play out all of the scenarios in your head of what else you could have done. But obviously, it was my first year in college, and I didn’t know what to expect. I’ll never forget what my coaches said to me once we got back to Lawrence.

I stayed on campus that year for summer classes, and it turned into this little solo experience of me getting into that grind of doing schoolwork, weightlifting, practicing, and everything I needed to do to make sure my coach was right.

It was never going to happen again.

The biggest thing for me is remembering where I came from. If I stay true to myself, anything is possible.

It’s remembering why I fell in love with the sport. I was a soccer player in high school when I was asked to join the cross country team to stay in shape over the summer. Honestly, my first real impression of the sport was pretty meh at first.

But I ended up finding a great group of friends that competed as well. That’s what drew me in in the beginning—that comradery and love for competing. I just found an incredible group of guys that loved the sport, and we grew and started loving it together.

In many ways, that feels like a lifetime ago. But that feeling of companionship continues to be a major driver for me — even today.

As my first competition in Tokyo comes closer, it’s all about preparation. And I think me and my coaches already have a formula in place when it comes to that. So we don’t really have to change all that much.

There’s obviously the physical aspects of it all. You’re kind of caught between decisions such as choosing to conserve energy and being well-rested for the Olympics versus grinding out a few more workouts to remain as sharp as possible ahead of the event. It’s kind of a balance of both of those things, honestly.

But I believe the thing that changes the most is the mental preparation.

I’ve never been to this stage before, and the nerves and excitement are all real. This is an opportunity that comes around once every four years. So naturally, you’re going to have those questions: Will I be able to perform on the day I’m supposed to? Can I live up to my potential?

That always sits in the back of my mind, but it holds no power over me because I know why I’m here. And as long as I know my way, that nervous energy will continue to take a backseat.

Frankly, I want to be done with the nerves.

That whole week-and-a-half at the Olympic Trials was stressful enough. It was the pinnacle of all of the hard work I’ve been putting in over the years just to qualify for the Olympic team. I’ll be honest, that was by far the most stress I’ve ever experienced in my life.

But coming across that finish line, within an instant, it was like all of that was just lifted off my shoulders. Then everything crashes in on you, and it’s just pure joy and excitement.

But instantly, there’s also that hunger for more. Now that it’s all settled in and everything, I just feel incredibly lucky to have this opportunity.

When I was just a first-grader, back in my Catholic school days, we had a field day event at the end of each year. It was just one meet, and we all kind of got thrown into track to compete.

I remember that moment vividly because I always thought it was the coolest thing in the world, trying to be the best in my grade.

And now, I get a crack at being the best in the world.