Jayhawk Insider: Cheers to You, Dok!

LAWRENCE, Kan. – When preparing for senior speeches, Coach Bill Self told senior Udoka Azubuike that his limit was five minutes. When he grabbed the mic to address the crowd following the Jayhawks’ 75-66 win over TCU in his final game in Allen Fieldhouse, Azubuike quickly noted that he would not heed his coach’s instructions.

“I don’t know, I might go over that,” the 7-foot center said with a sly grin as he kicked off his Senior Night address.

Four years ago, Azubuike, just 16 years old, came to Kansas to begin his basketball journey. Fighting through injuries and growing as a player, he has left his mark on the program and set himself up to continue to be a successful basketball player. His speech came in just under fifteen minutes total, a much more fitting length for a career filled with triumphs and tragedies.

In Wednesday night’s game against TCU, Azubuike played at the top of his game. His 31 points were the most by a senior on Senior Night since Danny Manning on March 5, 1988 against Oklahoma State. He also became the first Jayhawk of the Big 12 era to post 30 points, 10 rebounds, and five blocks in any game.

“It’s a good day to be a Jayhawk. We are the Big 12 Champions and it was my last home game at the Fieldhouse. It was good, but a little emotional, being my last game here." 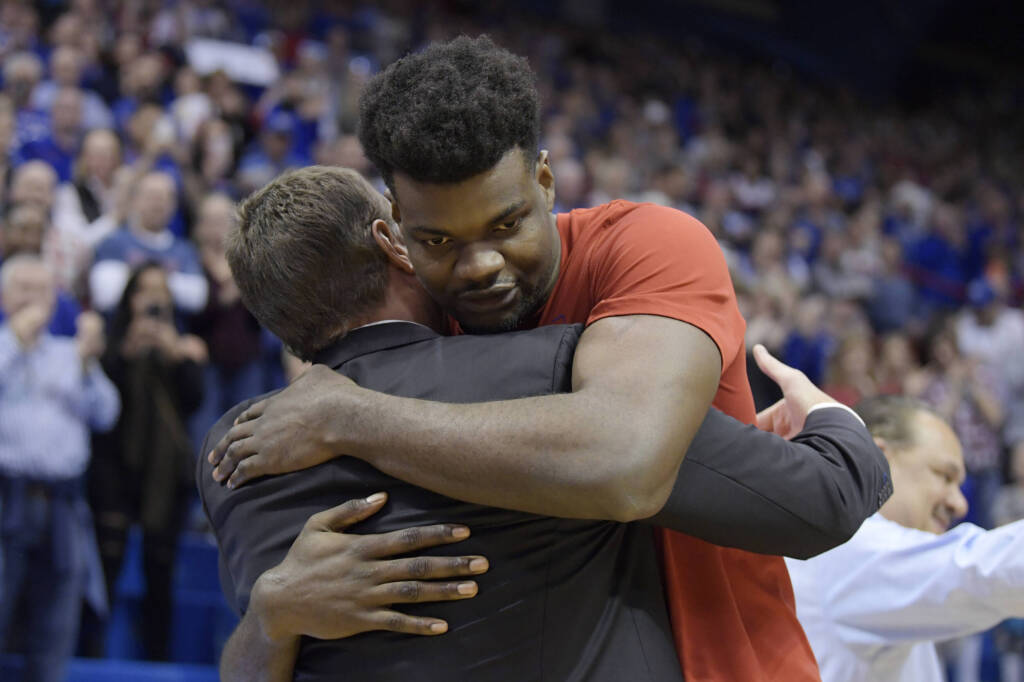 Azubuike has claimed the Big 12 player of the week title three times this season and has been nominated for player of the year. In addition to all of his titles and nominations, he also hit the 1,000-point mark this year in a game against Oklahoma State.

With all his recent success, it is hard to remember that Azubuike’s journey to this point was anything but easy. Azubuike moved to the United States from Delta, Nigeria because his mother encouraged him to look for more opportunities after the passing of his father. He found that opportunity playing basketball at the University of Kansas. Unfortunately, that was not the end of the adversity Azubuike would face. He had two seasons cut short by injury. In his freshman year he played 11 games and in his junior year, he played only nine.

No player wants a season cut short, much less two, but these injuries have provided Azubuike with more time to show Kansas, and all of college basketball what he can really do. “When he came here, I thought he was a one-year guy and four years later, he’s still here. He may be coming back next year,” TCU head coach Jamie Dixon joked during the post-game press conference. “I never thought he would be here four years but congratulations to him.”

Azubuike has grown a lot in the last four years, not only as a player, but as a person as well. “Dok came on his official visit when he was 15 years old—he didn’t look 15—but he was just 15 years old. I am proud of a lot of guys that have come here and persevered, but just to see him grow up. I was amazed by how much he’s matured. He’s so confident in himself right now,” Coach Self said.

As Azubuike’s confidence has grown, so has his success. He has been playing much more aggressively and continuing to knock down baskets in crucial games to help lead his team to victory. He has also been contributing heavily on defense. When talking about this team’s development defensively, Azubuike is a large part of that as well. His aggressiveness on both ends of the court and has been essential to the team’s success this season.

When asked what impressed him most about Azubuike’s game lately, Coach Self was quick to come up with an answer. 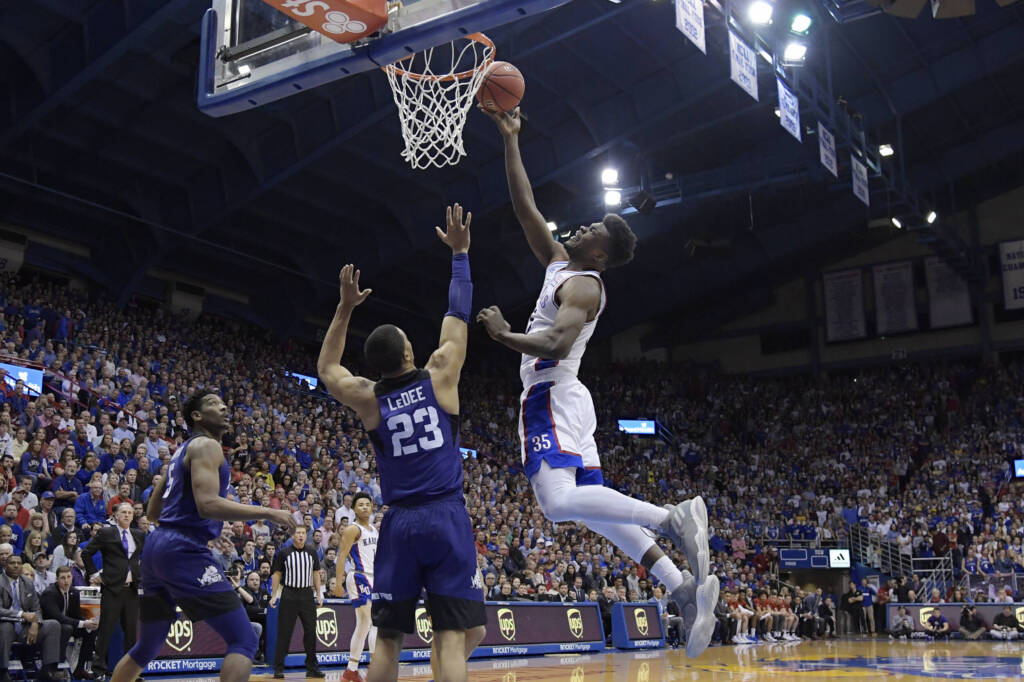 During his senior speech on Wednesday night, Azubuike took time to give credit to each person who has helped him throughout his time at KU. He took time to thank the managers and academic team. He also individually thanked each coach, with a special shoutout to Coach Self at the end, he thanked the fans, his host family and of course—his teammates.

Azubuike acknowledged that he and his teammates have been through a lot, but there is more to come. “I am so excited for the rest of this season, we have done so much, but we still have a long way to go,” Azubuike said.

His teammates think highly of him as well. They have confidence that when they get him the ball, he is going to deliver. This game plan—getting the ball to Dok—has been key this season. “We knew the dominant game he had against them last time and they didn’t really have an answer for him. It was our game plan. We knew something good was going to come out of it. He was great tonight and I’m just happy we got the win,” sophomore Devon Dotson said.

The Jayhawks will continue to play aggressive and finish the regular season strong. They are looking forward to getting into tournament play. Azubuike has a goal of making it all the way to the Final Four in Atlanta, because last time KU played in the Final Four was the last time he saw his mom.

“I want to tell you guys that we aren’t done yet. Jayhawk Nation, let’s go to Atlanta. Rock Chalk!” 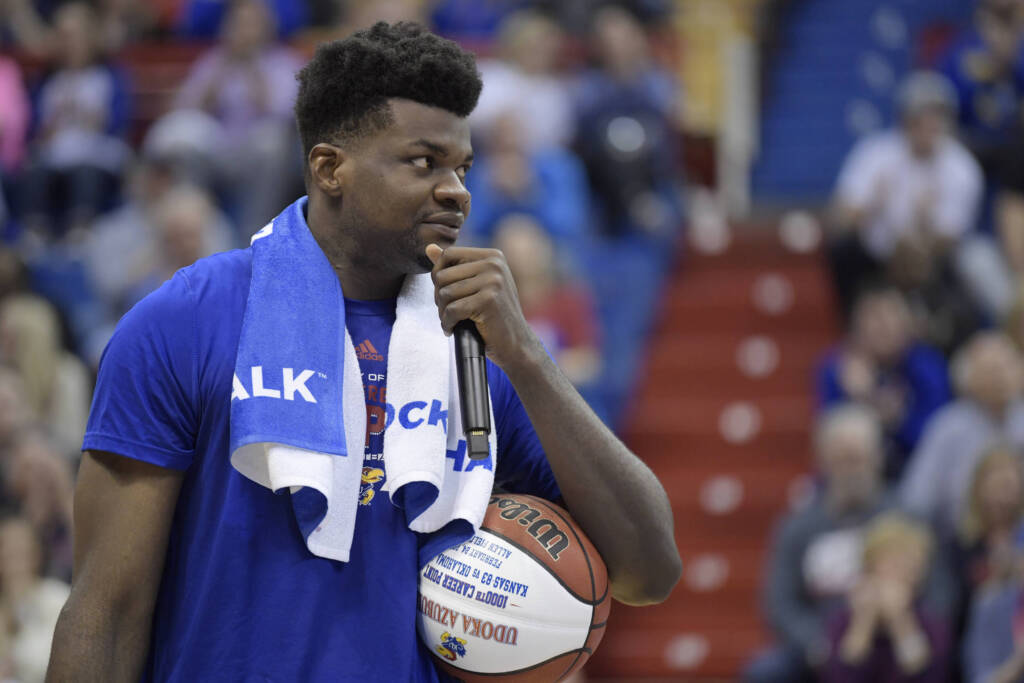