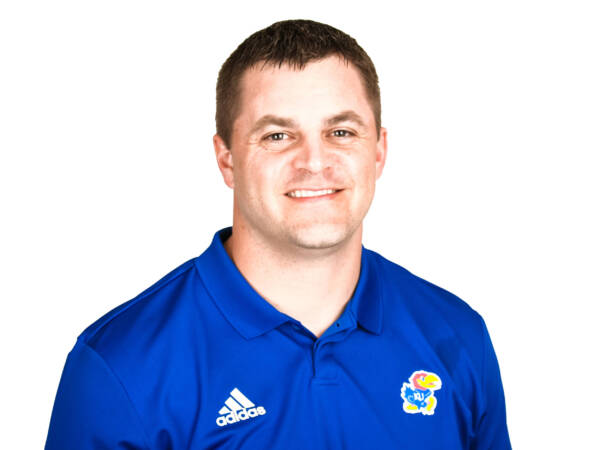 Jake Schoonover joined the Kansas Jayhawks as the program’s special teams coordinator and outside linebackers coach in February of 2021. Schoonover brings more than 10 years of coaching experience with him to the Jayhawks.

Schoonover comes to Kansas after spending the past three seasons at Bowling Green. He joined the staff in 2018 as linebackers coach, before adding special teams responsibilities one season later. He also coached safeties during his time with the Falcons.

This past season, Bowling Green was second in the MAC in kickoff returns and fourth in punt returns. The Falcons also ranked fifth in field goal percentage and were perfect on extra-point attempts. In 2019, Bowling Green’s special teams unit blocked a punt, blocked a field goal and forced two muffed kicks in the same game, topping rival Toledo 20-7.

Also in 2020, linebacker Darren Anders finished fifth in the MAC in tackles per game at 11.0 and was named Academic All-MAC.

Prior to his time at Bowling Green, Schoonover spent seven seasons at Illinois State. He began his career with the Redbirds as the linebackers coach in 2011, before adding the title of special teams coordinator in 2013.

Schoonover mentored some of the top linebackers in the history of the Illinois State program during his time there, including middle linebacker Pat Meehan, who earned back-to-back first-team all-conference honors.

In his role as special teams coordinator, Schoonover worked with kicker Nick Aussieker, who finished as the school’s all-time leading scorer with 310 points. In 2014, punter CJ Laros earned second-team all-conference honors and averaged 40.6 yards per punt, which went down as the third-best single-season mark in school history.

The Redbirds also had a prolific return game under Schoonover, similar to Bowling Green. In his first year, Illinois State returned both a punt and a kickoff in the same season for the first time in more than five years. Punt returner Tevin Allen also earned postseason honors for the Redbirds, averaging a league-best 27.9 yards per return.

Schoonover spent the 2010 season at Illinois Wesleyan, where he coached defensive backs and assisted with special teams duties. In 2009, Schoonover was an assistant at Illinois State, working with the program’s offensive line and wide receivers.

He played collegiately at Missouri Western State, where he started 30 games at linebacker and was a team captain. He played two seasons for the arena league Peoria Pirates as a linebacker and wide receiver.

Schoonover earned a degree in physical education from Missouri Western in 2008 and received a master’s degree in sports management with a concentration in administration in 2010 from American Public University.

Schoonover and his wife, Katherine, have one son, Jackson, and one daughter, Kenley.