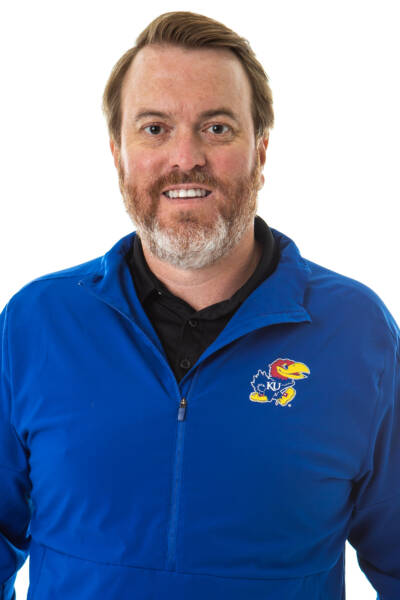 Brian Carpenter has managed the mascot team for the University of Kansas since April of 2019, first as an assistant coach, before being elevated to the head coaching position in February of 2020. His day-to-day responsibilities include teaching the mascot team the character, walk, movements, and traditions of Big and Baby Jay. This involves practicing and lots of walking in suit! He makes sure that the team maintains full-time academic status, gets good grades and attends team workouts at 5:30 a.m., twice a week. Carpenter also handles the scheduling for the mascots at games as well as outside appearances. Additionally, Carpenter assists and runs tryouts — if you think you have what it takes to be Big or Baby Jay, email him at bcarpenter@kuathletics.com for more information on requirements and when tryouts will be held next.

Big and Baby Jay can be seen at school functions for the different departments, weddings, graduations, grocery store openings and any other public events that require the University of Kansas to be at. If you would like to inquire about hosting one of our mascots, please go to https://bit.ly/2kRp0Ol and fill out the form.

Born and raised in Lincoln, Nebraska, Carpenter moved to Overland Park, Kansas in 1992. There, he attended Blue Valley Northwest High School from which he graduated in 1996. While at Blue Valley Northwest, Carpenter was a member of the Huskies’ football team. In addition, he was the school’s first mascot, which led him to the University of Kansas, where he continued to share his mascot talents with Jayhawk Nation during his time in Lawrence.

Carpenter earned his undergraduate degree in Communications Studies from the University of Kansas in 2001. While attending school in Lawrence, Carpenter was a mascot for Kansas Athletics, serving as Big Jay from 1997-2000. He has held multiple mascot positions over the years, as the Blue Valley Northwest Husky, Big Jay for KU, and the backup Sluggerrr for the Kansas City Royals. These roles ultimately led him to his current coaching role with his alma mater. While he says he has aged out of being in the suit himself, he still loves being around the action at KU!

Outside of coaching KU’s mascots, Carpenter works at ClickSafety in Leawood, Kansas, as a Key Account Manager. He has been with the company since 2017, selling online safety training. Prior to his current position, he held similar roles at Dodge Data & Analytics, Pulte Homes, and Enterprise Rent-A-Car. He is a part of the Waldo/Brookside Rotary Club in Kansas City, and heavily involved with the Kansas City Irish Fest (Labor Day Weekend – Crown Center) as a board member. Carpenter is also involved with ClickSafety’s parent company, Ascend Learning’s charity board, weAscend.

In his free time, Carpenter likes to spend time his wife, Sally, and their two children, Patrick and Lucy; the family’s two dogs, Bruce Banner and Timmy; their two cats, Sweetheart and Cocoa as well as the family’s fishes. While the Carpenter household is self-professed “never clean and always loud” they also have a lot of fun and wouldn’t want it any other way. In addition to his family time, Carpenter likes to golf and watch all things Kansas Athletics and Kansas City sports. He truly enjoys working with his team and seeing them do well both in and out of their mascot boots.