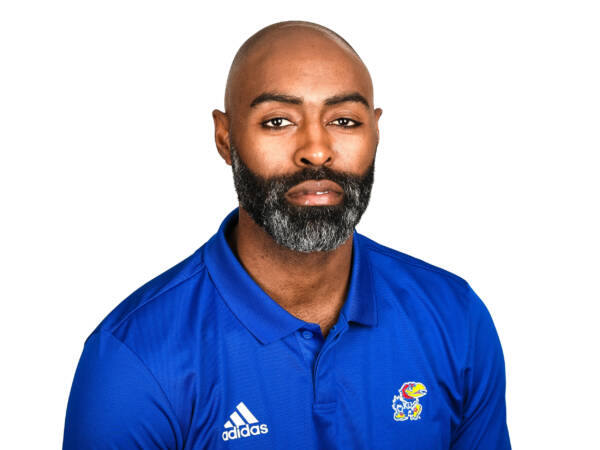 Chevis Jackson is entering his third season at Kansas, coaching the KU cornerbacks. Jackson has made an immediate impact during his first two seasons in Lawrence, guiding Hasan Defense to All-Big 12 honors in his first season with the Jayhawks and Karon Prunty to Freshman All-America honors in 2020.

The Kansas cornerbacks have thrived under Jackson’s instruction. Defense started all 12 games under Jackson in 2019 and had nine passes defended to lead the Jayhawks. His eight pass breakups were also a team high. Cornerback Kyle Mayberry also had a solid season under Jackson with three tackles-for-loss and five pass breakups.

In 2020, Prunty emerged as one of the top freshmen cornerbacks in the country under Jackson’s eye. Prunty started all nine games as a true freshman and tied for the national lead among freshmen with 10 pass breakups. He notched his first interception of the season in the final game of the year and did not allow a single touchdown throughout the nine games.

Prunty was named a 247Sports.com True Freshman All-American after the season, along with earning honorable mention All-Big 12 recognition. He allowed just 38.5 percent of passes to be completed on him, which finished as the seventh-best mark in the season and tops among all freshmen. Jackson also mentored Elijah Jones to a breakout season as a senior. Jones played in all nine games and had six pass breakups and three tackles-for-loss from his cornerback position.

Jackson joined the KU staff after spending three seasons as a defensive backs coach at Ball State. While at Ball State, Jackson was named the 2017 Mid-American Conference Recruiter of the Year by 247Sports.com, serving as the lead recruiter for the Cardinals while also coaching the defensive backs.

Prior to his stint at Ball State, Jackson spent the 2015 season as a graduate assistant at his alma mater, LSU, working on a staff that guided the Tigers to a 9-3 mark and a final national ranking of No. 16.

During the 2013-14 seasons, Jackson worked as a defensive graduate assistant at South Alabama, where he helped the Jaguars earn a bowl bid for the first time in program history, a bid to the 2014 Camellia Bowl. South Alabama’s defense ranked second in the Sun Belt in both scoring defense and total defense in 2013.

Jackson was a four-year letter winner and a three-year starter at cornerback at LSU. During his time with the program, the Tigers made two SEC Championship game appearances, winning the title in 2007. Jackson recorded two tackles and returned an interception 34 yards in helping lead LSU to a 38-24 win over Ohio State in the 2008 BCS National Championship game.

An All-SEC First Team honoree in 2007, Jackson was selected by the Atlanta Falcons in the third round of the 2008 NFL Draft. He played in the NFL for four seasons with five different teams – Atlanta, Jacksonville, New England, Denver and Carolina.