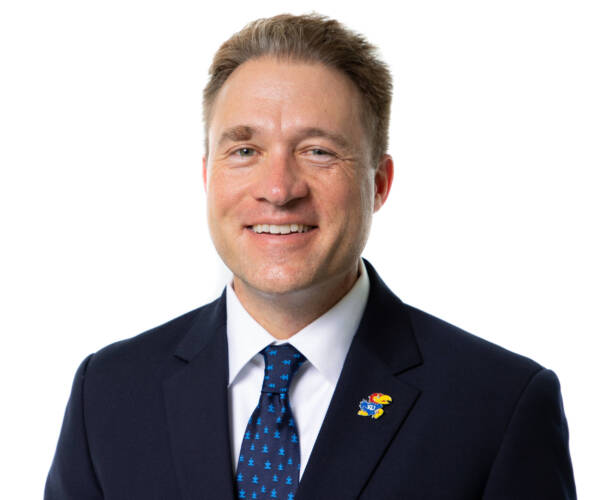 Dan Fitzgerald, an elite recruiter, player developer, coach and ascending figure in college baseball, has been named the Kansas Baseball Head Coach, Director of Athletics Travis Goff announced today. Fitzgerald has signed a 6-year contract that will keep him in Lawrence through the 2028 season.

“Dan Fitzgerald is a man of exceptional integrity, proven leader, developer of men, tremendous baseball mind, elite recruiter and the perfect fit for Kansas Baseball,” Director of Athletics Travis Goff said. “When we set out to find the next leader of this program, we talked to current student-athletes, alumni, and baseball leaders across the nation to help inform our search.  In countless conversations, Dan Fitzgerald’s name and background – along with the attributes in which he leads with every day – were highlighted as the ideal fit for KU Baseball. Dan clearly articulated his vision for the future of Kansas Baseball and passionately demonstrated his desire to be at the University of Kansas. We could not be more excited about the outlook for our program with Coach Fitzgerald at the helm. We are ecstatic to welcome Dan, his wife, Kelly, and their three boys, Will, Max and Ben, to the Jayhawk family.”

“I would like to thank Travis Goff and the leadership team at KU for entrusting me with this amazing opportunity to be the head baseball coach at the University of Kansas,” Fitzgerald said. “In my conversations with Travis and the search committee, it became crystal clear that our visions aligned regarding the future of this program. There is a passion for KU that permeated from each individual I met with and that shared partnership will be vital to the program’s future success. I have been very diligent in waiting for the right opportunity to lead a program and this was the perfect destination for me and my family. I look forward to developing these student-athletes as baseball players as well as men, and putting a program together that all Jayhawks can be proud of.”

At DBU, Fitzgerald had a major hand in bringing unprecedented success to the Patriots program. In his nine seasons with the program, Dallas Baptist played in seven NCAA Regionals, won three regular-season conference championships and won three conference tournaments.

Fitzgerald comes to Lawrence with a sterling reputation in player development and recruiting, along with deep Midwestern ties, having served as a head coach at Des Moines Area Community College for five seasons and spending five seasons as an assistant in the region.

During his nine seasons at Dallas Baptist (2012-21), Fitzgerald played a major role in the Patriots developing and recruiting some of the top talent in the country. He helped recruit and develop 30 Major League Baseball Draft picks, 11 of those being Top-10 picks, nine All-Americans, eight freshman All-Americans, 69 all-conference selections and two conference players of the year.

Dallas Baptist tallied 270 victories from 2015-21, which was the fifth-most by a Division I baseball program during that span. The Patriots, known best for their explosive offense, ranked in the top 25 nationally in home runs in each season during Fitzgerald’s time at Dallas Baptist. The team held a top 25 ranking in a total of 51 offensive categories across his nine seasons.

With the Patriots proving to be one of the top programs nationally, Fitzgerald was promoted from assistant coach to associate head coach in June 2016. Dallas Baptist posted a 341-168 (.670) record during his tenure with six seasons of at least 40 wins. Fitzgerald helped land some of the top prep players nationally, by being able to recruit throughout the country, thanks to his trusted relationships and proven track record, which he now brings to Kansas.

Fitzgerald has earned respect among his peers. In a survey of 90 head coaches conducted by Baseball America in 2020, Fitzgerald was rated No. 7 on a list of assistant coaches from across the nation that will one day make the best head coach. Baseball America also rated Fitzgerald as the No. 7 assistant coach in the nation in 2018, while D1Baseball ranked him as the 17th-best recruiter in the country in 2016.

Prior to his time at LSU and Dallas Baptist, Fitzgerald was the head coach at Des Moines Area Community College (2008-12). In his five years at DMACC, Fitzgerald was awarded Coach of the Year honors by 13 different publications. His team’s won five consecutive conference championships and advanced to the Junior College World Series on four separate occasions.

Fitzgerald also had 36 players sign with Division I programs, nine student-athletes be named Junior College All-Americans, including the 2009 National Player of the Year.  His program finished with at least 40 wins in every season and compiled a 249-73 (.773) record over the five-year stretch.

In addition to coaching at schools, Fitzgerald has spent time as a head coach in top summer leagues around the country. That includes a stint in 2004 as the Field Manager for Athletes in Action in Alaska, the sport ministry of Campus Crusade for Christ.

Dan Fitzgerald has never tried to be something other than himself at each stop in his college baseball career. A solid coach at Dallas Baptist, earning the fifth most wins in the country since 2015. A great recruiter at LSU, resulting in the number one class in 2022. But most important to him, he’s always been an outstanding teammate. It’s always been ab