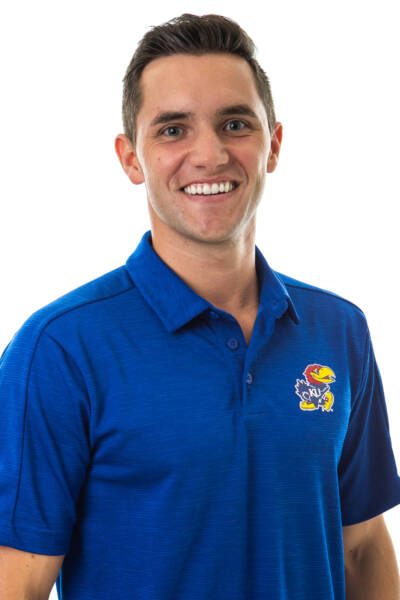 As head cheerleading coach for the University of Kansas Athletics, Drake Stafford is responsible for anything and everything related to the school’s cheer teams, both Coed and All-Girl. He sets strategic goals for the program that align with its overall mission, which is: To provide complete and unwavering support of our Athletic Department.

Because they are utilized throughout the entire academic year, Stafford must set a rigorous practice schedule for his teams that are meticulous and well planned. He is responsible for the scheduling of games, special events and workouts. Additionally, he oversees all facets of recruiting and fundraising. Lastly, and most importantly, he is charged with maintaining the well-being and safety of every athlete on his teams. To achieve this, he must serve in a wide variety of roles such as: Career Coach, Academic Advisor, Life Coach, Safety Instructor and Rule Enforcer. Stafford expects all of his athletes to achieve the very best life has to offer after college, and believes that starting them on the right foot and setting a good example is the best way to accomplish that.

Stafford’s passion for coaching led him to the University of Kansas after accepting a full-time job at Cerner Corporation in Kansas City. He has worked in human resources there since October of 2017. Stafford began at KU as a volunteer assistant coach that same year under a previous head coach. When the position opened up in mid-2018, he was asked to take on the responsibility of head coach.

In his time at KU, the coaches and teams have worked very hard to bring back the competitive championship mindset and resulted in their participation at College Nationals every year. The growth of the team has been outstanding and all involved are looking forward to continuing the teams’ upward trajectory. In addition, KU Athletics realized a need that had been unfilled for a long time: an All-Girl squad. The inaugural team began in 2020 and has so far exceeded all expectations. This change has allowed the spirit squads to better support the Athletic Department and shift their competitive landscape. Stafford, his staff and his athletes are all very excited about the changes that have been made and are confident in their ability to uphold the athletic standards of the University.

Born in Fort Smith, Arkansas, Stafford was raised in Van Buren, Arkansas. There, he attended Van Buren High School (VBHS) from which he graduated in 2013. While at VBHS, Stafford was a member of the Pointers’ baseball, football and cheerleading teams.

Stafford took his cheerleading skills with him to Oklahoma State University, where he cheered for the Cowboys and Cowgirls during his time in Stillwater. In 2017, he earned a Bachelor of Science in statistics with a minor in marketing. During his collegiate career, he was a two-time National Cheerleaders Association (NCA) National Champion (2014, 2015) as well as a two-time NCA National Championship Runner-Up (2016, 2017). Voted a team captain in 2015, Stafford served in that capacity until his graduation from OSU. He earned NCA Collegiate All-American honors in 2015, 2016 and 2017.

Outside of working two jobs, Stafford’s free time is hard to come by. When he does find some time off, he enjoys binge watching the newest shows, taking weekend trips to ski or hike and spending time with his family at the lake. In addition to his personal hobbies, Stafford finds many opportunities to stay involved in the sport of cheerleading, as he can oftentimes be found judging Varsity competitions and helping film curriculum for summer camp material.