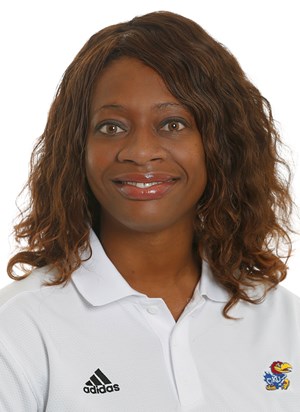 Elisha Brewer is in her 18th season on the Kansas track & field coaching staff. In her time as the sprints and hurdles coach at KU, Brewer has tutored her athletes to 22 All-America honors.

Brewer pupil Michael Stigler concluded his unprecedented career in 2015 with a national title as well as his fourth-straight Big 12 400-meter hurdles title. He also added a conference title in the 600 yards with a school-record time of 1:08.59 in 2014. Stigler earned First Team All-America honors four times with two-consecutive runner-up finishes before claiming his first NCAA title in the event at the 2015 NCAA Outdoor Championships.

The 2012 and 2013 seasons saw Brewer mentor Paris Daniels to three Big 12 200-meter championships, three First-Team All-America distinctions and the 2013 Big 12 Performer of the Year accolade. She also saw first-team All-America honors with her hurdle star, Stigler, who repeated as Big 12 Champion in the 400-meter hurdles, and earned the Big 12’s freshman Track Athlete of the Year award in 2012.

Brewer also mentored the first All-American 4×100-meter relay team in 2013 as the team went on to finish fifth at the NCAA Championships in helping the women’s team to the program’s first national title.

During the 2011 outdoor season, Kendra Bradley was a Big 12 finalist in the 400 meters. Brewer also helped mentor the 4×400-meter relay team of Denesha Morris, Bradley, Taylor Washington and Diamond Dixon to new school record, a seventh-place finish at the NCAA Indoor Championships and coached Bradley, Morris, Dixon and Shayla Wilson to a new school record and an eighth-place finish at the NCAA Outdoor Championships (3:33.00).

In 2010, Brewer helped mentor the Kansas women’s 4×400-meter relay team to an appearance at the NCAA Outdoor Championships. The quartet of Bradley, Washington, Wilson and Taissa Makhmayeva turned in the third-fastest time in school history (3:37:04).

Freshman Keith Hayes was a 2009 Big 12 finalist in the 60-meter hurdles, finishing fifth. That outdoor season, Hayes finished second at the Midwest Regional Championships in the 110 hurdles (13.71), and also took fourth at the USA Junior National meet (13.46).

Brewer oversaw Anderson to one of the best seasons of any Jayhawk ever as she broke both the 60 and 200-meter dash records on numerous occasions in 2008. Her career-best time of 7.22 in the 60 meters earned her the Big 12 championship in the event. Anderson became the first woman in KU history to win two All-America honors in both the indoor and outdoor seasons. Anderson would end her KU career with a runner-up finish in the 200 meters at the NCAA Championships (22.67).

Brewer also coached Sha’Ray Butler to her best season in 2008. Butler was a part of the school record-breaking 4×400-meter relay team (Butler, Anderson, Charity Stowers, Crystal Manning – 3:35.86) that qualified for the NCAA Indoor Championships. Butler was also a Big 12 finalist and an NCAA Midwest Regional top-five finisher in the 400-meter hurdles.

Brewer currently resides in Lawrence with her daughter Asjah and son Isaiah.