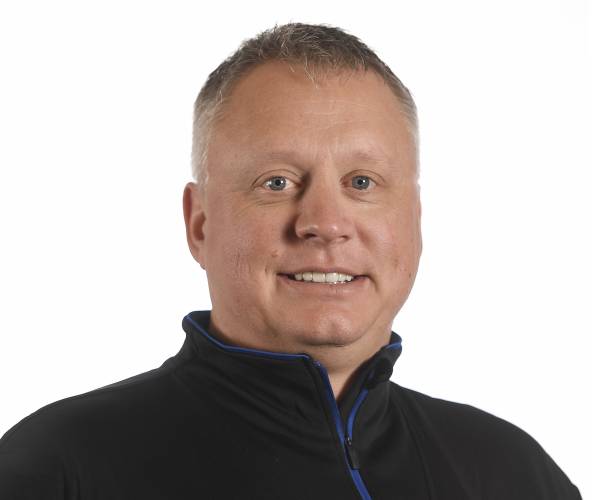 Jeff Hecklinski is in his second season on Les Miles’ Kansas staff, serving as the recruiting coordinator and tight ends coach.

Hecklinski arrived in Lawrence after spending the previous two seasons at Indiana State, where he served as both the offensive coordinator and recruiting coordinator, while also overseeing the Sycamore quarterbacks.

In his first year at Indiana State, Hecklinski saw two offensive players named All-MVFC including tight end Jacquet McClendon who was named to the Second Team and LeMonte Booker who garnered Honorable Mention accolades at running back.

Prior to his time in Terre Haute, Hecklinski was the passing game coordinator and QB coach at Colorado State-Pueblo in 2015.

Hecklinski was a four-year member of Brady Hoke’s staff at Michigan from 2011-14 as the assistant head coach, recruiting coordinator and wide receivers coach. His final season in 2014 was highlighted by Devin Funchess, who was drafted in the second round of the 2015 NFL Draft by the Carolina Panthers. Funchess was a Second-Team All-Big Ten selection in 2014, leading Michigan with 62 catches for 733 yards and four touchdowns.

Hecklinksi worked with a Michigan offense that averaged 383.1 yards per game in 2012. Gallon and Roy Roundtree led the group, combining for 80 catches and 1,409 yards and seven touchdowns. Gallon caught a then career-best nine passes for 145 yards and two touchdowns in the Outback Bowl, while Roundtree finished his career ranked sixth in U-M history in career receptions (154) and receiving yards (2,304).

The receivers contributed to an offense that averaged 404.7 yards per game in 2011, which ranked third in the Big Ten. Five different receivers had multiple touchdown catches, led by Junior Hemingway, who totaled 34 receptions for 699 yards and four touchdowns. Two of Hemingway’s touchdowns came in the Sugar Bowl, where he was named MVP in Michigan’s 23-20 overtime victory over Virginia Tech.

Prior to that, Hecklinski was part of Hoke’s staff at San Diego State from 2009-10, which won the 2010 Poinsettia Bowl. At SDSU, Hecklinski helped mentor star running back Ronnie Hillman, who broke NFL legend Marshall Faulk’s single-season rushing record and was drafted in the third round by the Denver Broncos in the 2012 NFL Draft.

Hecklinski first joined up with Hoke at Ball State in 2004, where he was the recruiting coordinator and wide receivers coach until he went to SDSU with Hoke after the 2008 season.

At Ball State, Hecklinski helped coach two of the most prolific players in Cardinal history in wideouts Dante Love, who ranked second in the country in 2007 in all-purpose yards (206.92), and Dante Ridgeway, who was an All-American and one of three finalists for the Biletnikoff Award in 2004.

Hecklinski earned his bachelor’s degree at Western Illinois in 1997, where he was a quarterback and threw for more than 5,980 yards to rank second in the school’s career record book, after transferring from Illinois following two seasons with the Illini. He played for the Arena Football League’s Albany Firebirds in 1998.

He and his wife, Tiffany, have a daughter, Riley, and two sons, Mikey and J.R.