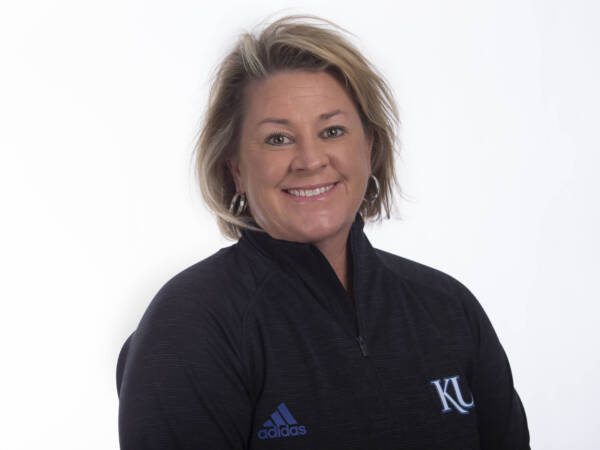 Jennifer McFalls finished her third season at the helm of the Kansas softball program in 2021 after being hired by the University of Kansas on Aug. 20, 2018.

The 2021 season saw the Jayhawks finish with a 22-26 overall record, marking only the second-complete season KU has seen under McFalls. During the season, McFalls coached the team to 56 home runs at the plate for the second-most all-time in program history trailing only the 60-homer performance in 2011. The 2021 team also upset three top-25 teams beginning with a 7-4 victory over No. 10 Oklahoma State to open Big 12 play on March 26. This was the first KU victory over OSU since 2015 and first win in Lawrence since 2014. The Jayhawks then upset No. 18 Missouri on April 13, 4-3, for the first KU Border Showdown win since 2009. The upsets were capped off with a win in Arrocha Ballpark over No 23 Wichita State for McFalls’ 50th-career victory leading the Crimson and Blue.

In her second year at the helm, the season was cut short due to COVID-19. The Jayhawks got their first 26 games in held a 13-13 record before the conference season was canceled. Heading into the 2021 season, McFalls holds a 28-49 overall record.

During the shortened 2020 season, McFalls helped coach redshirt sophomore Shelby Gayre to a banner season. Gayre led the Jayhawks offensively with a .393 average. The catcher also led the team with 11 home runs, 24 RBIs and 13 walks to be named a second-team All-American by Softball America.

In McFalls’ first season as the head coach of the Jayhawks, KU went 15-36 overall and finished sixth in the Big 12 Conference with a 3-15 conference record.

Prior to her tenure at Kansas, McFalls helped lead Texas to NCAA Tournament appearances in each of her eight years as an assistant there (2011-2018), including a Super Regional in 2012 and the Women’s College World Series in 2013.  Prior to going to Texas she served two stints as a collegiate assistant coach – one season at the University of Oklahoma (1998) and three seasons at Texas A&M University (1995-97).

McFalls served as the Longhorns’ defensive coach and recruiting coordinator.  During her tenure the Longhorns registered some of the highest fielding-percentage and double-play numbers in the history of the program.  She helped coach nine All-America selections, two Big 12 Conference Players of the Year and more than three dozen All-Big 12 players.

She played on the USA’s gold-medal-winning team at the 2000 Olympics, scoring the game-winning run in the USA’s victory over Japan in the gold-medal game. She also scored the only run in the USA’s 1-0 victory over Australia to send the Americans to the gold-medal game. She was a member of the U.S. National Team from 1994-2000, helping her teams to a gold medal in the 1999 Pan American Games and a gold medal at the 1998 World Championships.

McFalls has also been active off the field with USA Softball.  She served on the USA Softball selection committee for five years and also as an assistant coach for Team USA at the 2010 Canadian Open Fast Pitch International Championship.

A four-year starter at shortstop for Texas A&M, McFalls earned first-team All-America honors in 1993 and led the Aggies in batting average, hits, total bases and slugging percentage in all four seasons. In 1994 she was named the school’s Female Athlete of the Year, and in 2001 she was inducted into the Texas A&M Hall of Fame.

McFalls has also coached at the professional level; in 2015 she earned coach-of-the-year honors as head coach of the Dallas Charge of the National Pro Fastpitch league.  She also served as a head coach for five years at the high-school level in Texas, and has directed numerous softball clinics across the United States.

WHAT THEY’RE SAYING ABOUT JENNIFER McFALLS
“Jennifer has enormous respect at every level of the game of softball.  She is incredibly student-centric, but at the same time not afraid to challenge them, and she has coached some of the best.  I’m ecstatic that Jennifer has this opportunity in the Big 12; our Conference just got better.”
– Chris Plonsky, Chief of Staff, Executive Senior Associate Athletics Director, University of Texas

“Jen was a phenomenal player at Texas A&M and with the USA National Team, and she has paid her dues in the coaching ranks.  Kansas is getting a quality person, a coach who has great passion for the game, and a player’s coach.  Jen has played and coached at the highest levels, and is well aware of what it takes to compete in the Big 12. She will no doubt hit the ground running.”– Jo Evans, Head Softball Coach, Texas A&M University (hired McFalls as an assistant coach at A&M)

“I have all the confidence in the world that Coach McFalls will lead KU softball to great heights.  She is obviously savvy to the Big 12 way of business.  She has high expectations, and can tap into success within the KU family, which is well supported.”
– Connie Clark, former Head Softball Coach, University of Texas