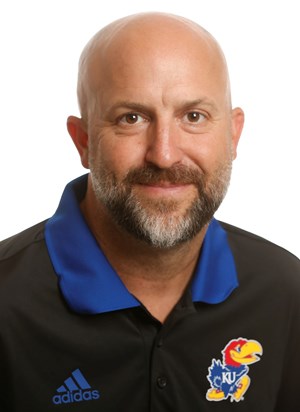 A staple to the Kansas soccer coaching staff, Kelly Miller begins his 24th season at the University of Kansas and 14th as the associate head coach under Mark Francis in 2022. In 2008, Miller was elevated to his current position after serving as an assistant coach for the first nine seasons of his tenure.

Miller also served a stint as an assistant coach for the National Women’s Soccer League’s FC Kansas City for five years (2013-17) with current U.S. National Team Head Coach Vlatko Andonovski. FC Kansas City won the NWSL Championship in back-to-back seasons in 2014 and 2015. In the team’s 2013 season, he helped guide the group to the top of the league standings and coached goalkeeper Nicole Barnhart, who was named the NWSL’s Goalkeeper of the Year after the 2013 season.

Along with working in the NWSL, Miller has also been an assistant coach with the U19 and U20 U.S. National Teams. Miller holds his USSF license as well.

A goalkeeper during his playing days, Miller trains the KU keepers along with the defenders to unite the two into a cohesive unit. In 2004, he was responsible for coaching the squad to the lowest goals-against average in program history at 0.55 and fewest goals allowed with 13. His duties also include serving as the program’s recruiting coordinator.

As the Jayhawk goalkeeper coach, Miller has developed his keepers to contend for conference and national recognition. He trained one of the best goalkeepers in KU soccer history in Meghan Miller from 2001-04. Meghan, who owns a school record 0.98 goals-against average, capped an outstanding career earning All-America second team honors in 2004. She was also a two-time All-Big 12 First Team performer and was named Big 12 Defensive Player of the Week on five occasions. Her jersey was retired in 2011 as part of the Jayhawks’ inaugural jersey retirement ceremony.

Miller also guided Sarah Peters to a record-setting career in the Crimson and Blue. Peters holds two top-five records for lowest goals against average in a single season (second in 2020 with .73 and fourth in 2019 with .75). She holds the record for most shutouts in a single season after finishing with 11 in 2019. Peters finished her career with the lowest goals against average amongst career stats in program history with a .82 and the most shutouts ever by a KU player with 29. She also ranks second in career wins with 36 and third in save percentage with .791. During her career, she earned Defensive Player of the Week or Goalkeeper of the Week honors in the Big 12 on seven occasions including three times during the 2020 season.

In 2006 sophomore keeper Julie Hanley posted a 0.98 goals against average with seven shutouts. Hanley was named the Big 12 Defensive Player of the Week for two consecutive weeks while senior goalkeeper Colleen Quinn earned the honor three-straight times in 2007. Miller’s back field contingents have garnered conference defensive player or goalkeeper of the week accolades 29 times in the 22-year history of the award.

Kat Liebetrau led the Big 12 Conference with 113 saves in 2010, while her .796 save percentage was the fifth-best mark in the league (second-best in school history) and her four shutouts tied for eighth. Liebetrau was recognized by the conference on Sept. 14 as the Big 12 Defensive Player of the Week for her efforts that included 17 saves in two games. After three years under Miller’s guidance, Liebetrau ranked fourth all-time in Kansas history with 197 career saves while her 1.77 goals against average is fifth.

Miller also oversaw the emergence of Kaitlyn Stroud as she worked her way to becoming one of the best Jayhawk keepers in program history. Stroud ended her career (2010-14) with a 1.21 goals-against average, the second lowest in program history, a number which included allowing only 14 goals in 19 outings as a senior in 2014. Stroud also amassed eight shutouts in 2014.

Miller has trained defenders Holly Gault, Estelle Johnson and Caroline Van Slambrouck during his time at KU as well. Gault (2003-06) was a two-time All-American and was named to the 13-person Big 12 10th Anniversary Team in 2005-06. Johnson trained under Miller from 2006-09, when she was chosen NSCAA All-Central Region selection twice. Following her four-year career at KU, which she concluded as the program’s leader in career starts with 83, Johnson became the first Jayhawk ever drafted by a Women’s Professional Soccer (WPS) team and is currently a member of the Washington Spirit (NWSL). Van Slambrouck (2011-14) played to All-Big 12 First Team honors in 2014 and was an NSCAA All-Central Region First Team Selection as well that year. Van Slambrouck went on to play professionally in Sweden for Kungsbacka DFF.

Miller graduated with a bachelor’s degree in fine arts from The Cooper Union in 1996 and currently resides in Lawrence.