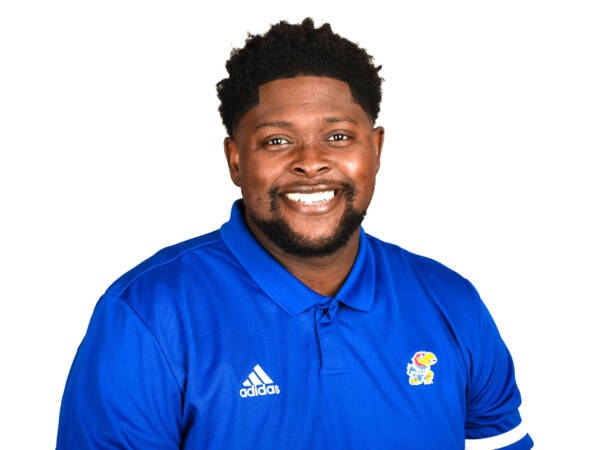 Kwahn Drake is entering his third season on staff at Kansas, serving as the defensive run game coordinator and defensive line coach.

In Drake’s second season in 2020, he mentored two redshirt freshmen — Marcus Harris and DaJon Terry — to standout seasons for the Jayhawks. Harris was one of the top freshmen defensive linemen in the conference, finishing with 7.5 tackles-for-loss. He finished second among all Big 12 freshmen and posted the most TFLs by a Kansas freshman since Jake Love in 2012.

Terry had 14 tackles and two sacks from his tackle position, working in tandem with Harris. Defensive end Caleb Sampson started all nine games for Kansas and was one of just two Jayhawk defenders to start all nine games in 2020.

Drake came to KU after spending one season at Colorado, under current KU defensive coordinator D.J. Eliot, where he was the defensive line coach. In Drake’s lone season in Boulder, he coached defensive tackle Mustafa Johnson, who led the Pac-12 in sacks and ranked third in tackles-for-loss. Johnson finished the season with 73 tackles, 8.5 sacks and 17.5 TFLs. He also led the Buffaloes with 16 quarterback pressures. His 17.5 tackles for loss rank 10th most in CU history and it’s the most by a Colorado player in 25 seasons.

He went to Colorado after serving as the defensive line coach for the 2017 season at Eastern Illinois. On the fast track as a rising star in the profession, EIU head coach Kim Dameron had promoted Drake to co-defensive coordinator following the season.

At EIU, under Drake’s tutelage, David Johnson earned second-team All-OVC honors for two-straight seasons. Under Drake’s tutelage, he finished his senior season with 51 tackles, 9.5 tackles-for-loss, which included 3.5 quarterback sacks. He ranked 11th in the OVC in sacks and 12th in TFLs.

Prior to his one-year stint at EIU, Drake spent the 2016 season as an offensive analyst at Memphis under head coach Mike Norvell. The Tigers finished 8-5 and earned an invitation to the Boca Raton Bowl. The offense was the second most-prolific in program history, amassing 6,028 yards of offense and scoring 57 touchdowns and 505 points, all the second-highest numbers in school annals. The Tigers’ 3,957 passing yards and 303 completions both were the third-most for a season in school history, with 34 touchdown passes a school best.

He then moved on New Orleans’ St. Augustine High School as defensive line coach for two years (2011-12). The Purple Knights claimed the District 10-4A championship in 2011 and finished as District 10-5A co-Champions in 2012. He was also the recruiting coordinator and academic advisor, and saw 25 of his players receiving football scholarships at NCAA Division I colleges during his time at St. Augustine.

His first taste in the collegiate coaching ranks came as a graduate assistant at Tulane in 2012; he was named the full-time defensive line coach for the 2014-15 seasons, the latter of which saw his players help Tulane rank 12th in the FBS in tackles for a loss per game. In 2012, Drake assisted the Green Wave defensive unit that ranked 22nd in the nation in total defense (352.1), 17th against the rush (123.7) and 18th in scoring (21.4).

He received his bachelor’s degree in Business Administration with a concentration in computer information systems from Nicholls State in 2009. He earned his master’s degree in Liberal Arts from Tulane in 2013.

A New Orleans native, he graduated from Destrehan (La.) High School where he lettered in football, basketball and track.