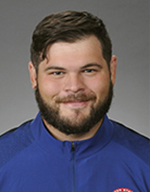 Personal: Son of Jared and Lisa Finley…Has two sisters, Matia and Rebecca…Joined the University of Wyoming in the summer of 2012 after three years at the University of Kansas…Eight-time NCAA All-American…Set a national high school record in the discus throw with a toss of 72.09 meters during the High Altitude Challenge in Alamosa, Colorado…Won gold medals in both the shot put and discus throw at the 2009 Pan American Junior Championships…Favorite professional sport teams are the Kansas City Chiefs (NFL), Denver Nuggets (NBA) and Kansas City Royals (MLB).

I remember feeling like a deer in the headlights when I experienced the Olympics for the very first time in 2016. I didn’t know what to expect. Everything was just so brand new.