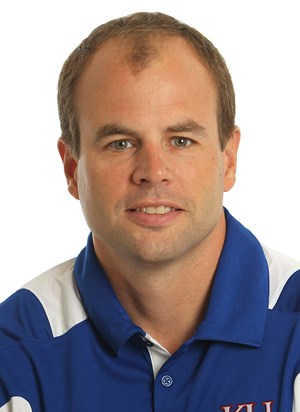 Michael Whittlesey is in his 13th season as an assistant coach for cross country and middle distance/distance running at Kansas. Throughout his career guiding runners both on the trails and the track, Whittlesey has accumulated impressive numbers in big achievements, including 12 NCAA Champions, 96 All Americans, 56 conference Champions (18 Big 12 Champions) and three USA National Champions.

The KU distance program has seen great success under Whittlesey’s tutelage, most recently during the 2019 cross country season, when the Kansas men’s team finished third out of 27 teams at the 2019 NCAA Midwest Regional Championships, just missing an automatic qualifying bid to the NCAA Championships, as the top-two teams in each regional advanced. It marked the men’s highest finish at a Regional meet since 2006, when the team placed second.

Individually, KU freshman Chandler Gibbens helped pace the Jayhawk men to a fourth-place finish at the annual Big 12 Cross Country Championship with his individual clocking of 24:06.0, which was good for 12th place and earned him All-Big 12 Team honors. At the conclusion of the season, Gibbens was named the Big 12 Men’s Cross Country Newcomer of the Year.

During the 2019 track & field season, Whittlesey coached Bryce Hoppel to one of the greatest seasons of all-time, where Hoppel won 19-consecutive races between indoor and outdoor season, including a pair of NCAA titles in the 800 meters, both indoors and outdoors. Hoppel’s time of 1:44.41 at the NCAA Outdoor Championships was the fifth-fastest time by a collegian ever in the event, while Hoppel rewrote the Kansas record books, holding seven of the top-10 indoor 800 meter times in Kansas history and six of the top-10 outdoor times.

In addition to Hoppel, Whittlesey coached distance standout Sharon Lokedi, who capped a successful 2018 outdoor season for the KU track distance squad with a national title in the 10,000-meter run at the NCAA Outdoor Championships, breaking a 30-year-old meet record with a time of 32:09.20. In total, Lokedi earned a total of 10 All-America honors in her Kansas career and won 12 Big 12 Conference crowns under Whittlesey’s tutelage. Lokedi also set the sixth-fastest 5,000 meter time in NCAA indoor history, running a 15:15.47 at the Sharon Colyear-Danville Season Opener.

The 2018 track & field season saw Whittlesey’s athletes earn nine All-America honors and win five conference crowns. Hoppel won the Big 12 Indoor 800-meter run crown and was a First Team All-American in the 800 meters at both the NCAA Indoor and Outdoor Championships; Lokedi tabbed a total of four All-America nods and four conference titles, including her national crown in the 10K; Courtney Coppinger placed seventh in the 3,000-meter steeplechase at the outdoor meet to earn First Team honors and was a member of the women’s distance medley relay team at NCAA Indoors that earned second team honors with fellow Whittlesey pupil Hannah Dimmick.

Whittlesey-coached athletes are all over the Kansas record books, with his trainees at the top of the charts in 10 different events. Lokedi owns Kansas records in the outdoor 5,000 meters and 10,000 meters, as well as 3,000 meters and 5,000 meters indoors. She is also a part of the school record-breaking indoor distance medley relay team with Coppinger and Dimmick. Coppinger broke the 3,000-meter steeplechase record in 2018, Dimmick and Riley Cooney were one-half of the school record-breaking 4×800-meter relay team at the 2018 Texas Relays, and Lauren Bonds owns the 1,500-meter outdoor record, as well as the 1,000-meter and one-mile indoor records.

Other athletes coached by Whittlesey that broke school records that have since been topped include Amanda Miller, Rebeka Stowe and Natalie Becker.

In 2015, Whittlesey helped lead the KU women’s cross country team to the program’s first appearance at the NCAA Championships.

One of Whittlesey’s most decorated Jayhawks, Stowe, was the 2012 Big 12 Champion in the 3,000-meter steeplechase and broke the school record in the event on numerous occasions. She earned First Team All-America honors at the 2011 and 2012 NCAA Outdoor Championships with her top-12 finishes in the 3,000-meter steeplechase. Stowe was also a two-time All-Big 12 honoree on the cross country course.

Whittlesey mentored Bonds to an outstanding 2010 senior season as she claimed the Big 12 Outdoor title in the 1,500 meters and went on to earn All-America honors by taking seventh at the NCAA Outdoor Championships. En route to earning All-America honors, Bonds set a new KU record in the event with her time of 4:14.29. Bonds also had a fine year off the track as she was named an Academic All-American and was a finalist for NCAA Woman of the Year.

Under his direction, the North Carolina middle distance/distance squads produced nine NCAA champions in six years, 70 All-Americans and 36 conference champions. Whittlesey led the track team to back-to-back NCAA titles in the distance medley relay at the 2006 and 2007 NCAA Indoor Championships. Along with the 2007 distance medley relay title, Whittlesey coached sophomore anchor Brie Felnagle to the individual NCAA title in the outdoor 1,500 meters. Under the guidance of Whittlesey, Felnagle captured three NCAA titles and was a 10-time All-American in her career.

After assisting the Tar Heels to a fourth-place indoor finish and another top-10 outdoor finish and producing four NCAA individual and relay titles, Whittlesey was awarded the first-ever NCAA Division I Track & Field National Assistant Coach of the Year for women’s middle distance/distance in 2003. Whittlesey also received the 2007 NCAA Outdoor Track & Field East Regional Assistant Coach of the Year honor.

Perhaps no other athlete thrived under Whittlesey more than Shalane Flanagan. Flanagan was the NCAA cross country champion in 2002 and 2003, and she was not only the first Carolina woman to ever take the cross country national championship, but she was only the third woman in NCAA history to successfully defend her title. A three-time recipient of the NCAA Cross Country Athlete of the Year award, Flanagan also excelled on the track. She won a pair of indoor national championships in 2003, claiming the title in the 3,000 meters and then teamed up with Erin Donohue, Anissa Gainey and Alice Schmidt to take first-place honors in the distance medley relay. Flanagan also earned a spot on the 2004 U.S. Olympic 5,000 team before claiming a bronze medal in the 10,000 at the 2008 Olympic Games.

Whittlesey also coached standout runner Alice Schmidt, who was a two-time national champion in the outdoor 800 and the first North Carolina track & field athlete to win a NCAA title in the same event twice. Both Schmidt and Flanagan went on to earn places on the 2005 U.S. Track & Field World Championship team, while Donohue earned All-America status in both cross country and track.

A native of Morris, Connecticut, Whittlesey started his coaching career at UConn as a graduate assistant, where he assisted with distance and was a pole vault and multi-event coach. He then served two years at UNC-Charlotte where he worked as an assistant coach. While with the 49ers, Whittlesey led his athletes to 53 new school records in 18 different events and coached all-conference performers in the triple jump and javelin.

Whittlesey’s competitive experience includes being the first American finisher in the 1995 Boston Marathon. He also qualified for the 1996 Olympic Trials in the marathon after competing as a non-recruited athlete at the University of Connecticut. He graduated from UConn in May 1990 with a bachelor’s degree in sports medicine/athletic training and later earned a master’s in biophysical science/exercise physiology in 1993. In 1997, Whittlesey received a doctorate of philosophy in sports science/exercise physiology from UConn.

Whittlesey and his wife, Carol, have two children; daughter Samantha and son Ryan.