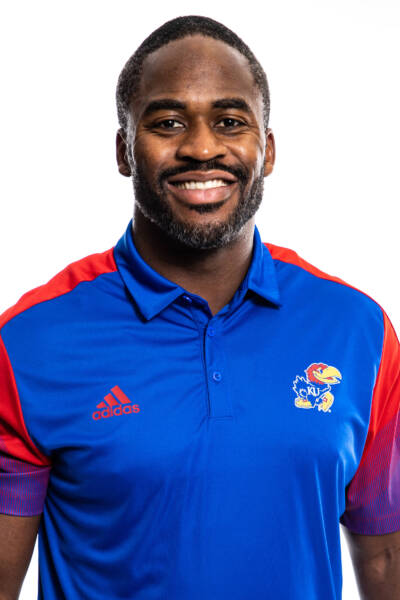 Taiwo Onatolu serves as an assistant coach working with the defensive ends and special teams under head coach Lance Leipold.

Onatolu spent the 2021 season as an analyst on the Jayhawks’ staff, before being promoted to an assistant coach in 2021. Onatolu previously worked at Buffalo as the defensive ends coach for three seasons and the cornerbacks coach for four seasons. While with the Bulls, he also coaches the specialists and had a stint as the director of player personnel.

Under the guidance from Onatolu, the defensive unit was one of UB’s strongest in 2019 as UB players ranked 1-2-3 in the MAC in sacks on the season behind Malcolm Koonce’s (9), Taylor Riggins’ (8.5) and Ledarius Mack’s (8) stellar seasons. Koonce and Riggins were named to the All-MAC First Team and Mack was a second-team selection. Defensive ends accounted for 27.5 of the school-record 43 sacks the Bulls registered in 2019.

In 2018, Buffalo ranked fifth in the Mid-American Conference in pass defense, allowing 194 yards passing per game. The Bulls recorded 14 interceptions, eight of which came from cornerbacks. Cameron Lewis was named All-MAC Second Team after posting three interceptions and six pass breakups on the year.

Prior to his stint at Buffalo, Onatolu spent five seasons at Missouri State working as an inside linebackers coach. In his first season at Missouri State in 2011, guided senior in David Ingram and a redshirt freshman in Andrew Beisel to outstanding seasons. Beisel went on to record a team-high 84 tackles, becoming the first MSU freshman since 1998 to lead the team in total stops and earned MVFC All-Newcomer Team distinctions. Ingram, who started all 11 games, tallied 77 tackles and finished third on the squad.

In 2012, Onatolu used five different starters in his rotation, including Beisel who led all middle linebackers with 73 stops in 10 games. Redshirt sophomore Christian Hoffmann brought down 41 ball carriers with five starts in an impressive debut campaign.

It was Beisel and Hoffmann who led Onatolu’s inside backers again in 2013. Beisel tallied 96 stops while starting 12 games and earned All-MVFC honorable mention honors his junior campaign, while Hoffman earned nine starts with 36 stops. The tandem helped MSU rank among the national leaders in red zone defense, rushing defense, scoring defense and passing defense, while ranking as one of the top defensive units in the MVFC.

A native of Papillion, NE, Onatolu served as an assistant at his alma mater from 2007-10 at the University of Nebraska-Omaha.

As a student-athlete, Onatolu was a standout linebacker at UNO, starting four seasons for the Mavericks, earning All-NCC First Team honors three times and All-America First Team honors in 2004. He was the North Central Conference’s Most Valuable Linebacker in 2004 after posting 98 tackles and five interceptions. He was in on 71 tackles as a senior, helping him earn All-America second and third-team honors by different agencies.

Onatolu finished his four-year stint at ONU as the program’s No. 2 all-time tackler with 371 total stops. He also tallied 46.5 tackles for loss, 12.5 sacks, seven interceptions and 182 solo tackles in 44 games. He helped the Mavericks to a pair of NCC titles and a 2005 playoff appearance.

After completing his degree in communications, public affairs and community service from UNO in 2006, Onatolu stayed at UNO for two years as a graduate assistant coach, working with the team’s linebackers.

Onatolu has a twin brother, Kenny, who has enjoyed a professional career that began with the Edmonton Eskimos in the Canadian Football League and included stints with the Minnesota Vikings and Carolina Panthers. He was also an All-NCC linebacker.

Onatolu and his wife, Jennifer, have a son, Isaiah.