I’m different. Period. No need to beat around the bush.

But as cliché as it sounds, I believe we should be using our differences in society to bring us closer together rather than drive each other further apart.

Unfortunately, this is obviously not always the case.

I’m reminded of this every time I walk into our boathouse at the University of Kansas. I look very different from the people around me, but that doesn’t change the fact that those people are my best friends—they’re my family.

On our team, we have people that identify with every background imaginable, whether that’s sexual orientation, race, or culture. That’s more than I can say for a lot of the social spaces I grew up in.

Just being in an environment like that changes you.

When I first got to KU, I’ll never forget the moment when I was walking into the boathouse to a team of 60 girls as a freshman.

I grew up in a house with two brothers. So it was a bit of a shock at first going from always being surrounded by a lot of testosterone to 60 females at one time.

Not only was I the only Asian girl on the team, but I was also 5-foot-2, standing in the middle of a towering group of girls that were six feet or taller.

The first few weeks were pretty rough. I felt like a fish out of water. I’d never really rowed before college. So, if you thought this was going to be one of those stories about an athlete accomplishing her lifelong dream of competing at a Division I school, I can assure you that wasn’t the case.

I didn’t know what was happening when I arrived at KU. I didn’t believe I belonged there, and I didn’t think I’d fit in. So I told myself to just stick it out for the next couple of months, and I’d eventually figure it out.

And then, our coaches introduced us to the lifelines activity.

We just all sat in a room separated into upperclassmen and underclassmen, and we were asked to share our feelings.

They wanted us to share what makes us tick as human beings and give an example of one of the hardest moments of our lives. So there we were, probably a month or so into meeting each other, sharing our deepest, darkest secrets.

By the end of the night, we were all crying.

It’s not easy to talk about yourself beyond the surface level, but it’s what got conversations going and brought us so much closer. It made us realize you never really know what anybody is going through. We instantly banded together and realized we had a lot more similarities than things that drove us apart.

I almost feel like that would be beneficial as a human race. Can you imagine? What if we could all freely share our story, unapologetically, and just explain what really makes us, well, us.

Taking the time to build those relationships and learning about one another would go a really long way. And maybe, just maybe, there’d be less hate in this world.

Maybe I wouldn’t have to fear for my family’s safety either off the mere premise of race.

That fear is very real and crippling. I deeply appreciated people outside of my community for reaching out and showing their concern, but after that incident in Atlanta, I really bonded with the other women of color on my team.

There were only a handful of us, but they understood the struggle and fear that was always sitting in the back of my mind.

I never go anywhere alone now. I used to be able to run my errands in peace, but now, I’m always with somebody out of fear that something would happen to me, God forbid. I’m more conscientious of my surroundings now than ever before.

I know how this might come across, and in all honesty, I even have a bit of a hard time saying it out loud. But seriously, this stuff is real. And my thoughts haven’t shifted this way by choice.

During an AAAPI meeting for our school’s diversity, equity, and inclusion council, a girl, for example, who was not that much older than me, shared a story about someone following her to her apartment and verbally and physically attacking her.

It just sucks that this is something people have to worry about.

Before all of this, my mom was always so chipper and positive in our phone conversations. Now, instead of asking me how my day is going, she’s constantly asking if I’m okay and if everything is alright. If I told her I was going out somewhere, she’d tell me all of the things I should have with me and basically give me a checklist to be safe.

As a college student, you don’t really want to go home all the time, but I’m also a big homebody and don’t mind jumping on the opportunity. But when I really think about it, it’s sad that everything going on in the world was also a driving force.

My mom needed me at home, not at school, so she could be confident that I was safe. How did we get to this point? 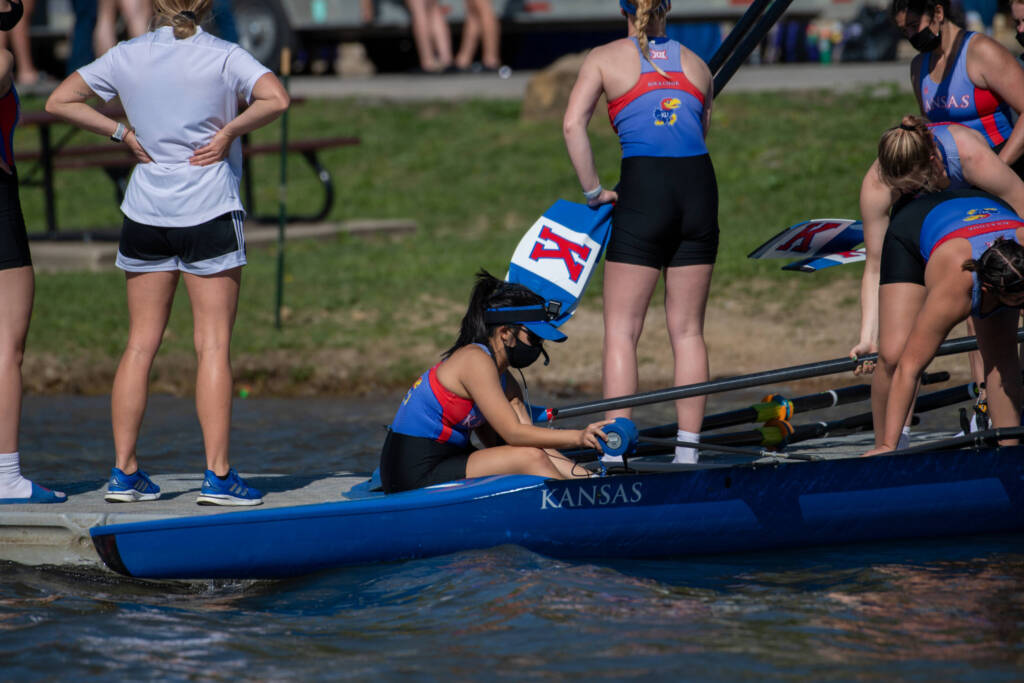 Everyone has a story

Where do we go from here?

That’s the real question we need to be asking. I feel what’s really impactful is amplifying the voices of the people that are directly impacted and making a space for them to share their stories.

KU has spearheaded the movement by just giving people spaces to speak.

In the past two months, I’ve had deeper interactions with athletes and staff members than I’ve had my entire three years here.

They are also talking about bringing that concept to campus as a whole and eventually taking those conversations beyond meetings and town halls.

Keep promoting diversity and inclusiveness. Keep being the university that turns a freshman meeting with 60 strangers into a sisterhood.

I still remember telling myself I’d stick it out on the rowing team for a couple of months and figure everything out in time. Here I am three years later as an incoming senior. I can’t say I figured it all out, but I have definitely come a long way.

And for that, wherever life takes me, I’ll be forever grateful.