Since 1873, Greek life has grown to become a vital part of the history and tradition of KU. Even though Jayhawk student-athletes already have time demands and challenges with their competitive sport, a few join social organizations as well. Senior linebacker Courtney Arnick not only became an active member of Omega Psi Phi while at KU, but this year he is also the chapter’s president.

Q: Was the Greek system something you knew you wanted to be a part of when you arrived at Kansas?
A: I kind of got introduced to Omega Psi Phi through my brother. He became a member at the University of Tulsa. I kind of learned about it through him, but I really wasn’t in to it. When I got here (to Kansas), I met some of the fraternity members. They reached out to me and they liked my character. They felt like I fit their organization and I met the principles. I thought about and looked into it and everything about the organization was pretty much what I stood for already. It made a good fit for me.

Q: What are those principles that the organization stands for?
A: The main things we go by are: manhood, scholarship, perseverance and uplift. Manhood is something I had already learned through football – show your character and be a good leader. Scholarship emphasizes education, which I recommend highly and have stood upon that. Uplift is to always lend out a helping hand and perseverance is getting through life situations. Getting through tough times and ups and downs.

Q: How long did it take you during the process to realize that this was for you?
A: Like I said, I kind of knew about (the organization) and I looked into it. Once I got the basis of fraternity I knew this is where I belong. I was already doing these things before I got to the fraternity. I believe in community service. I believe in helping others, like children from our community. I was already handling my education. It was like I knew it from the jump.

Q: How did you juggle your time as a student-athlete, with all the time demands that go into doing that, and being a member of a fraternity?
A: It was really kind of tough, honestly. At the same time though, it is something that I love and something that I do. Aside from football, in my spare time I get together with the fellas and plan community service opportunities or events on campus. It is really a spare time deal, but it is what we do anyway. Ball comes first, that is what I am here for, but (everything else) just comes naturally.

Q: Are there a number of your teammates actively involved in fraternities as well?
A: I am the only current member of Omega Psi Phi on the football team right now, but throughout the history of our fraternity at KU there has been heavy involvement from the football team and other student-athletes.

Q: It is common to see Omega Psi Phi’s in gold-painted boots, what is the significance?
A: They are simply Omega tradition. The gold painting represents many things but to me it is an honor. The shoes symbolize that you are officially a brother of Omega Psi Phi and in “fighting trim” with the new family. We hop, march and work in those and they have become an Omega Symbol.

Q: Your commitment to Omega Psi Phi has increased substantially over the last few months. It is my understanding you are now the president of the fraternity. How did that come about?
A: It was just kind of my time of going through the process. People leave and I was one of the members that had been here a while. Basically, I was approached and they said, “We think it is your time and you have shown your character and ability to be a good leader, etcetera.” I already knew the ins and outs of the fraternity and now I just handle the business portion by planning everything and getting any help that I can.

Q: I’m assuming that increased your role and time commitment?
A: Oh, yes – very heavily, very heavily. We do plenty of planning all types of events from a school function to community service to anything you can think of to help people out. 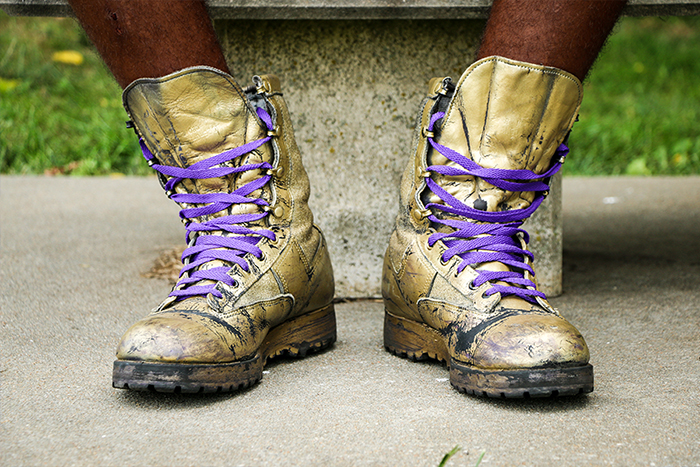 Q: There is no doubt that community service is important to you and the organization. Are there ones in particular that are a focus?
A: My favorite community service event is actually the blood drive and our events to fight breast cancer. Those are my favorites because I have family, such as my mom and godmom, who have been through breast cancer. When I put on events like that it is something that I am really passionate about. I try to pump that out to the whole school and really try to make that one of our biggest events.

Editor’s note: Rock Chalk Weekly ran a story last year, entitled ‘Courtney’s Heart’ about Arnick and his mother’s battle with breast cancer which can be seen by clicking here.

Q: I heard that you hosted a weekend of events from fraternities and sororities from several states over the summer prior to fall camp?
A: We hosted our district meetings this summer on campus. With Omega Psi Phi we have districts and there are about 12 districts. In the A district there an eight states – Kansas, Missouri, Iowa, North Dakota, South Dakota, Colorado, Nebraska and New Mexico. Basically, we all get together for a conference and plan district meetings. Once again, we are big on community service so we put on an event as well. Then we also had to plan for dinners and alumni events. It was a pretty big weekend.

Q: Now that you are in season, do you get a reprieve on your responsibilities as president or how does that work?
A: We all help each other. We are like a big family of brothers. They know that I’m (in season) right now, so if I need some help I can ask a member for a helping hand.

Q: After your time at Kansas, between your time management as a student-athlete and running a fraternity, I would think you are going to be highly-sought after.

A: I hope so (with a smile). It’s a big role, honestly, in the fraternity and then playing ball. But it really just comes naturally. I have just taken those aspects that I have learned playing football growing up and applying it to a fraternity and life. It has just been the same exact principles and the same way I have been living my whole life. It just allows me the opportunity to do stuff on a bigger scale for other people.

Q: Between football and your fraternity, you are probably pretty well known around campus?
A: (Laughs) Yeah, I wear my letters and I talk to a lot of people. Several come up to me and tell me that they like what I’m doing and they like our events. Besides our breast cancer awareness event, one of the most touching moments I have had (with one of our events) was when we put on a suicide awareness campaign. We were surprised at how many people were touched and helped by the event and just knowing that we were able to put smiles on faces who were down and dealing with things. We are really changing people’s lives and that’s a big thing.

Editor’s note: Arnick’s commitment to football and the Omega Psi Phi fraternity didn’t slow down his academic progress. In fact, Arnick graduated with a bachelor’s degree in communication and a minor is sociology. He will walk in May 2017 and is currently taking master’s degree classes, while serving as a fraternity president and logging tackles on Saturdays.