🏈 Freshman Karon Prunty Lets His Play Do The Talking

LAWRENCE, Kan. –  If you’ve seen cornerback Karon Prunty on the field, some of the first things you may notice about him are his length – standing at 6’1”, 189 lbs. – and his ability to take receivers out of the game. What you may not expect is that Prunty is just a true freshman at KU, yet among the top young cornerbacks in all of college football.

Starting all nine games as a true freshman from Portsmouth, Virginia, Prunty held opponents to just a 38.5% completion percentage against him, which ranks seventh in all of college football, while not allowing a single touchdown all season.

He also broke up 10 passes during the 2020 season, tied for the most among freshmen nationally and tied for sixth among all players, regardless of experience. 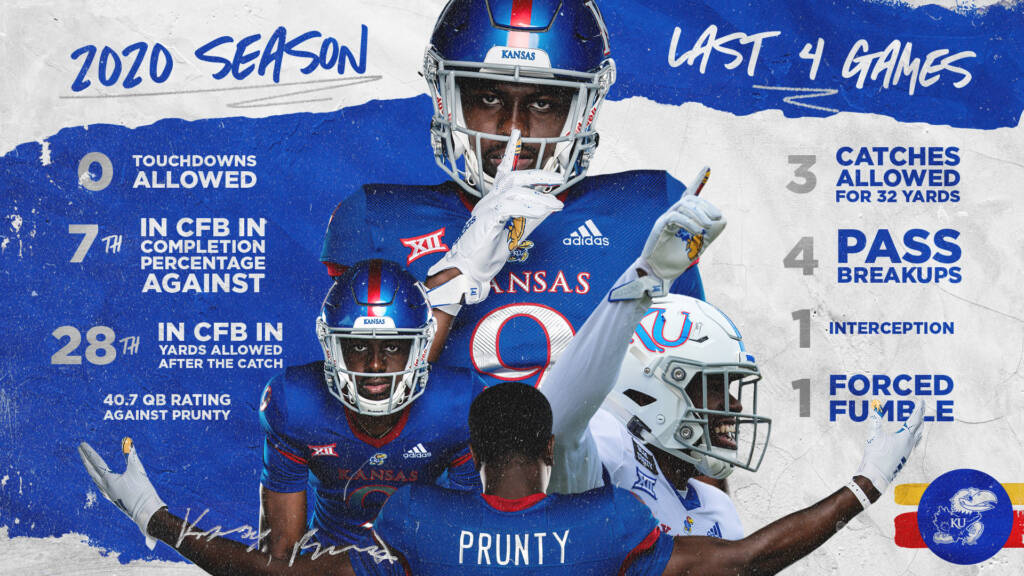 With such lockdown play as a true freshman, Prunty has garnered the respect of his coaches, peers and teams around the country.

“Karon Prunty has stepped onto the field unknown and has done a great job of shutting down guys that we put him on,” head coach Les Miles said. “I watched a specific cut of Karon and he is just very talented. They’re not throwing the ball to him.”

In the final four games of the season, Prunty only allowed three catches for 32 yards, while breaking up four passes, his first career interception and also forced a fumble. Against TCU, the ball wasn’t thrown his way at all, while he stifled some of the top receivers in the Big 12.

Facing off against the leading receivers as a true freshman is no easy task, yet Prunty has done so successfully and with a mentality that has impressed teammates.

“You can’t get into his head, it’s like he just has a reset button,” freshman teammate Luke Grimm said. “He’s just mechanical, knows what he is doing and he’s confident in himself. That’s what you have to do.”

“He doesn’t have a limit on him. He’s a great player that practices hard and comes out every week and performs,” senior safety Ricky Thomas said. “He’s going to be something special.”

Prunty played his high school ball at I.C. Norcom High School in Portsmouth, Virginia, where he was ranked as 30th-best recruit in the state, according to ESPN. Despite receiving offers to stay in-state, Prunty chose Kansas, which was among the first schools to offer him and stick with him throughout the recruiting process.

In fact, when Miles was asked about Prunty on signing day in December of 2019, Miles reflected on visiting with Prunty’s family, which involved a trip to the Planter’s Peanut Factory – where Prunty’s father works as a manager.  Miles also talked about Prunty’s athleticism, as he was the Virginia High School League (VHSL) Class 3A state champion in the 55 and 100 meters in track & field.

“I’ll tell you the Karon Prunty story,” Miles said during his 2020 signing day press conference. “He’s a 50-meter champion in the state of Virginia, he’s a 100-meter runner, got great speed, toughness. He’s a wonderful man … We went through the school and we found out there’s not a single person in that school who just doesn’t think the world of the guy as a student.”

It’s difficult to make an impact in college football as a true freshman – nonetheless start all nine games and have a season such as Prunty, but he has taken the season in stride and there is no telling what he will do in his career at KU.