With the win, Kansas ended exhibition play with a 1-1 record. Emporia State concluded its exhibition season 0-2.

Tied at 10-10, Kansas finished the first quarter on a 6-0 run in the final two minutes of the period. After a pair of free throws by Jayhawk freshman guard Holly Kersgieter, KU senior Mariane De Carvalho converted on a fast break with a layup with just under a minute to play in the quarter. On the next possession, KU sophomore guard Aniya Thomas stole her second ball of the quarter and sped to an uncontested layup giving KU a 16-10 lead.

In the second quarter, Emporia State clawed its way back and took a one-point lead, 27-26, on a Mollie Mounsey 3-pointer with just over a minute before the half. Helgren then collected her fifth rebound of the half off her own miss and follow-up basket gave the Jayhawks a 28-27 halftime edge. Helgren would end the contest with a team-high seven rebounds.

Emporia State took an early lead in the third quarter, 32-30, before Kansas would go on a 13-3 run to take a 43-35 advantage. Stephens scored eight straight points during the run including two traditional 3-point plays and a pair of free throws.

Up 48-44, Kansas went on an 11-2 run to create a 57-45 cushion with just over five minutes to play. Stephens led the way scoring four points, while Helgren added a bucket. Thomas had another steal and layup, and sophomore guard Brooklyn Mitchell drained a 3-pointer in the run.

Kansas will open regular-season play when it hosts Indiana State on Thursday, Nov. 7, at 7 p.m. (Central) in Allen Fieldhouse. The contest will be televised Big 12 NOW and ESPN+. 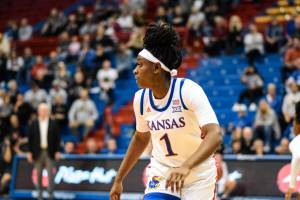 Tina Stephens leads the Jayhawks in scoring with 15 points and has 4 rebounds in the fourth.

Tina Stephens takes it strong into the paint for the and-1! 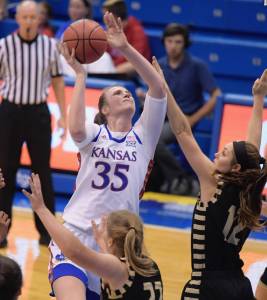 Bailey Helgren leads the Jayhawks at the half with 7 points, 5 rebounds and 4 blocks.