The Jayhawks last played against Oklahoma State Feb. 2 in the final game of a rare home-and-home series in Stillwater, Oklahoma. Despite a strong finish and holding a 14-10 advantage after the first quarter, KU fell to OSU, 82-55.

The Jayhawks got an impressive first half from Holly Kersgieter against Oklahoma State Feb. 2. She had 15 points in 13 minutes, while also adding five rebounds, an assist and a steal by the break. Kersgieter’s double-figure point finish made it 11 games this season – all but one – that she has completed the feat. The Oklahoma native also has been the Jayhawks leading scorer in eight contests. In addition to her offensive prowess, she is second on the team with 6.4 rebounds per contest, and is behind Ioanna Chatzileonti’s 7.9 rebound per game average.

Tina Stephens tallied her 150th point this season in the loss at Oklahoma State and joins Kersigeter as the only Jayhawks to average double-digit points (11.5). Stephens has been incredibly proficient for KU, holding a team-best 53.3-percent field-goal percentage this season. Stephens along with Kersgieter and Zakiyah Franklin are the only three Jayhawks to have started 12-or-more games this season.

Chisom Ajekwu continues to build on a strong sophomore campaign, earning the start against the Cowgirls Feb. 2. She is second on the team in blocks (8) and only behind Chatzileonti’s team-best 17. Despite playing in only nine games this season, she has corralled 39 rebounds and ranks fourth on the team in rebounds per game (4.3). 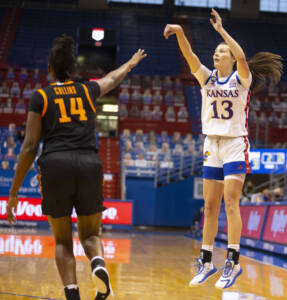 OPPONENT PREVIEW: BAYLOR
Baylor hosts Kansas for the first meeting between the two schools this season, and were originally scheduled to meet Jan. 13 in Lawrence, Kansas, but the game was postponed. The Lady Bears are 12-2, and 7-1 in Big 12 action, and enter the game on a four-game winning streak. Baylor’s lone Big 12 loss of the season came against Iowa State, 75-71, Jan. 16.

The BU offense is led bye NaLyssa Smith, who averages a team-high 17.6 points per game and 10.1 rebounds per game. Smith was recently named to the Late Season Top 20 Watch List for the John R. Wooden Award and ranks 24th in the NCAA and 4th in the Big 12 with seven double-doubles. She has tallied six double-doubles in her last seven contests.

UP NEXT
Kansas returns to Allen Fieldhouse Sunday, Feb. 7 at 1:30 p.m. to host TCU for their second meeting this season. The game will be televised on the Big 12 Now on ESPN+.