The Jayhawks are coming off a hard fought battle at No. 19/21 West Virginia. Despite the 69-61 loss against the Mountaineers, the Jayhawks have some momentum going into the K-State game. Holly Kersgieter scored a career high 25 points and pulled down six rebounds in Wednesday night’s game. The Jayhawks also forced the Mountaineers to turn the ball over 17 times.

After the first quarter against West Virginia, Kansas was down 23-12. The Jayhawks chipped away at the Mountaineer lead and with 2:53 left to play in the first half, Kersgieter hit a layup to bring the score to 33-28 and put the Jayhawks in striking distance. The Mountaineers started to pull away again with a 16 point lead at one point in the third, but the Jayhawks continued to respond. With just 24 seconds left in the fourth quarter, Stephens hit a pair of free throws to bring the score to 61-65, but that was as close as Kansas was going to get.

In the earlier matchup this year against K-State, Kansas came out on top 70-63 after Tina Stephens and Kersgieter led the way for a Jayhawk comeback from a first-half 14-point deficit. Stephens went on in that game to score a career-high 22 points. 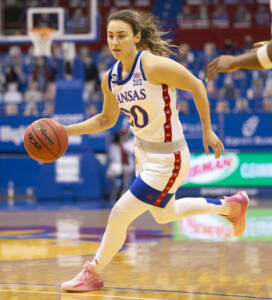 SCHEDULE UPDATE
Kansas’ postponed games against Big 12 foes Baylor, Iowa State and West Virginia have been rescheduled during the week prior to the Big 12 tournament. KU will host Baylor Feb. 27 and travel to Iowa State March 3 before concluding the regular season March 6 at home against West Virginia.

UP NEXT
Kansas returns home to host Iowa State Feb. 17 at 7 p.m. The game will be broadcast on the Big 12 Now on ESPN+.