In the win over Kansas State, Tina Stephens recorded a career-high 22 points on 10-for-17 shooting, including 2-for-3 from behind the arc. Stephens logged 13 of Kansas’ first 17 points in the win. Holly Kersgieter (17) and Zakiyah Franklin (12) each finished with double-digit points, while Kersigeter logged nine rebounds. Franklin finished 10-for-10 from the free throw line, while Kersgieter added 10 made free throws. Ioanna Chatzileonti recorded three solo blocks and improved to 1.82 blocks per game for fifth in the Big 12. 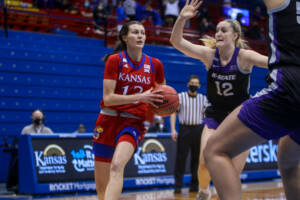 OPPONENT PREVIEW: OKLAHOMA
Oklahoma enters the game against Kansas 4-7, 1-5 in Big 12 play. The Sooners opened the season with a loss against Houston before having its next three games cancelled. OU dropped games at Georgia and Kansas before winning its first game of the season vs. Texas State. OU recorded another loss, this time versus in-state rival Oklahoma State, before beating South Dakota and Arkansas-Pine Bluff. In its next seven games, three were postponed and three were losses, with OU’s lone Big 12 win over Texas Tech Jan. 6.

The Sooners have a trio of scorers averaging double-digit points, and are led by Madi Williams’ 22.3 points per game. Joining Williams are Taylor Robertson (15.9) and Gabby Gregory (15.5). Mandy Simpson is the team leader with 7.6 rebounds per game and 68 total rebounds, despite only starting four games. The duo of Williams and Liz Scott each are team leaders with 12 steals.

DEC. 10, 2020 VS. OKLAHOMA
In the first meeting between Oklahoma and Kansas this season, the Jayhawks earned their first Big 12 victory of the season, beating OU, 74-64. KU was led by Tina Stephens’ 18 points, while Holly Kersgieter added 17 and Thomas with 14. Stephens also led Kansas with eight rebounds.

UP NEXT
Kansas returns Allen Fieldhouse to host Oklahoma State, Jan. 30 at 4 p.m. The game will be broadcast on Big 12 Now on ESPN+.