LAWRENCE, Kan. – Kansas women’s basketball (6-6, 2-4 Big 12) returns to Allen Fieldhouse on Saturday to host Oklahoma State in a rare home-and-home series. The Jayhawks will host the Cowgirls in Lawrence at 4 p.m., on Saturday, and then the two teams will hook up again Tuesday night, Jan. 30, in Stillwater for a 6:30 p.m., matchup.

The Jayhawks are looking for back-to-back home wins after knocking off in-state rival Kansas State last weekend at Allen Fieldhouse. Following the win over the Wildcats, the Jayhawks suffered a three-point loss at Oklahoma on Wednesday. Kansas attempted a feverish comeback late, but came up just short. In that game, Tina Stephens led the way with 19 points and 10 rebounds. Ioanna Chatzileonti added 14 points and eight boards.

On the season, Holly Kersgeiter, who has started all 11 games she’s appeared in, leads the team in points at 15.5 per game. She’s also tied for second in rebounds at 6.5 a game and is second in assists with 25. Stephens is the team’s second-leading scorer at 13.1 points per game, starting 10 of the 11 contests she’s appeared in.

Stephens enters Saturday’s game against Oklahoma State playing some of the best basketball of her career. She poured in a career-high 22 points against Kansas State, before posting her double-double against Oklahoma. She is 17 for her last 27 from the field over the last two games. She’s also more than capable of shooting from range, and is 5-of-8 from three this season.

Zakiyah Franklin, one of only three Jayhawks to appear in all 12 games this season, leads the team with 43 assists and is averaging 8.5 points per game.

Inside, Kansas will continue to rely on Stephens, Chatzileonti, Chisom Ajekwu and others to make their presence felt in the paint. The Jayhawks are outrebounding teams 43.3 to 36.4 on the season and have 46 blocked shots on the year, 12 more than they’ve had blocked themselves. 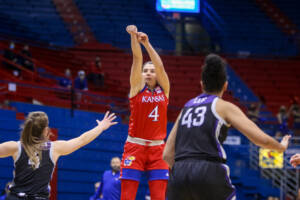 OPPONENT PREVIEW: OKLAHOMA STATE
Oklahoma State enters Saturday’s matchup with an 11-5 mark on the season and a 7-3 conference record. After a three-game losing streak earlier this month, the Cowgirls have notched back-to-back victories at Kansas State and home versus Texas. Both wins were by 14 or more points.

The squad is led by Natasha Mack, who has started all 16 games for Oklahoma State. She’s averaging a team-best 18.9 points per game, while also leading the team in rebounding at 11.7 rebounds a contest. Mack also has 65 blocks, averaging more than four a contest.

Ja’Mee Asberry is also having a strong season, averaging 16.7 points per game and shooting 40 percent from 3-point range. She is also the primary facilitator, leading the team with 63 assists so far this season. Mack and Asberry are the only two Oklahoma State players to start all 16 games so far this year.

Oklahoma State will be looking to avoid a second-straight loss in Lawrence, after falling to Kansas by eight last year. Zakiyah Franklin had 23 points and eight assists in the win for Kansas. Tina Stephens also had a double-double with 13 points and 12 rebounds.

LAST TIME OUT AGAINST OKLAHOMA STATE
In the last meeting between the two Big 12 schools last season, Kansas earned the 77-69 victory over Oklahoma State. KU was led by Zakiyah Franklin’s 23 points, while Holly Kersgieter (14) and Tina Stephens (13) rounded out the group of double-figure scorers.

UP NEXT
Kansas travels to Stillwater, Oklahoma, to play its second game in a back-to-back against Oklahoma State, Feb. 2 at 6:30 p.m. The game will be broadcast on Big 12 Now on ESPN+.