In the loss to TTU, Julie Brosseau provided a spark off the bench, netting 14 points on 5-for-13 shooting to lead all Kansas scorers. Holly Kersgieter again reached double-figures for Kansas, finishing with 10 points and nearly earning a double-double with a team-high nine rebounds. Chisom Ajekwu earned her third-consecutive start of the season, and tied Kersgieter for the team lead with nine rebounds – a career high for Ajekwu. Aniya Thomas joined Brosseau and Kersgieter with 10 points of her own, while also leading the team with two steals.

The Jayhawks enter the game with a trio of scorers averaging double figures, and are led by Kersgieter’s 16.3 points per game. She also has moved into second on the team with 6.9 rebounds per game. Tina Stephens earned the start against Texas Tech and is Kansas’ second-leading scorer with 11.4 points per game. Brosseau rounds out the group with her 10.4 points per contest.

On the defensive side of the ball, Ioanna Chatzileonti boasts 9.0 rebounds per game and is also the team leader with 14 blocks. Chatzileonti tallied seven points with six rebounds against the Lady Raiders. 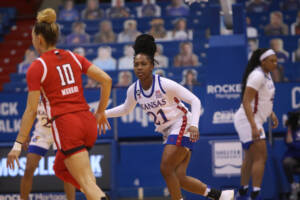 OPPONENT PREVIEW: KANSAS STATE
Kansas State enters the Dillons Sunflower Showdown 5-5, and 0-3 in the Big 12. The Wildcats opened the season with a win over Southern before falling to then-No. 11/12 Kentucky. After beating Central Arkansas, KSU dropped its game against Idaho State before winning three straight. Kansas State dropped a pair of games against Iowa State and Texas before having their next 5-games postponed.

The Kansas State offense is led by a pair of scorers – Ayoka Lee (16.8 PTS) and Christianna Carr (13.3 PTS). The pair are the only two Wildcats to average more than 10 points a game this season. Lee also is their team leader in rebounds (7.3), field-goal percentage (.636) and blocks (15). Aiding Lee on defense is Emilee Ebert, who is second on the team with 13 blocks, while Sydney Goodson is the team leader with 15 steals.

UP NEXT
Kansas returns to the road to face Oklahoma in Norman, Okla., Jan. 27 at 7 p.m. The game will be broadcast on Big 12 Now on ESPN+.