LAWRENCE, Kan. – A season-high 21-point effort from senior center Udoka Azubuike powered the No. 4/5 Kansas Jayhawks to a 75-63 win over East Tennessee State Tuesday night inside Allen Fieldhouse. Kansas shot 56 percent from the field on the night, despite hitting just 1-of-14 tries from 3-point range.

The win improved the Jayhawks to 3-1 on the year as KU kicked off the Maui Jim Maui Invitational with the campus round contest. The Buccaneers suffered their first loss of the season, now at 3-1.

It was a tale of two halves as, for moments, it seemed Kansas was on its way to another blowout in front of 16,300 inside Allen Fieldhouse during the opening 20 minutes. KU was paced by sophomore guard Devon Dotson in the first frame, who turned in 13 of his 19 points in helping the Jayhawks build its lead to as much as 18 points within the first 13 minutes of action.

The Jayhawks hit 19-of-30 shots (63.3 percent) in the first half, and held the Buccaneers to just 11 field goals on 40.7 percent shooting. KU’s defense also forced 10 ETSU turnovers in the first 20 minutes and transformed those 10 giveaways into 20 points. All this helped KU take a 43-31 lead into the halftime locker room.

The early minutes of the second stanza was anything but pretty for both sides as the two teams combined for 4-of-19 from the field and nine turnovers within the first eight minutes following the restart. After the rocky start, it was the Buccaneers that found their footing and managed to cut their deficit to single digits before the midway point of the half.

Azubuike helped the Jayhawks weather the storm as the 7-0 big man poured in 11 second-half points to keep ETSU at arm’s length. The senior anchored a KU paint presence that the Buccaneers could not match-up with, as Kansas outscored the SoCon squad 54-24 in the paint.

The visitors made things interesting, hitting four-straight 3-pointers to pull within five points, 61-56, with just under six minutes to play in regulation. However, veterans Marcus Garrett and Silvio De Sousa scored 10 points during a 14-7 KU run to close the game, as the Jayhawks sealed the 75-63 victory, their 24th-straight home win.

KU closed the night with a 55.6 percent clip (33-of-54) from the field, despite connecting on just one 3-pointer on 11 tries. Azubuike led the Jayhawks in scoring for the first time this season, posting 21 points on 10-of-13 shooting. Dotson was close behind with his 19 points to go along with six assists. Garrett was the only other Jayhawk to hit double-figures, with his 13 points in addition to six rebounds.

Marcus Garrett now has double figures along with Dok and Dotson. The trio has 51 of the Jayhawks’ 69 points with just 2:55 to play! 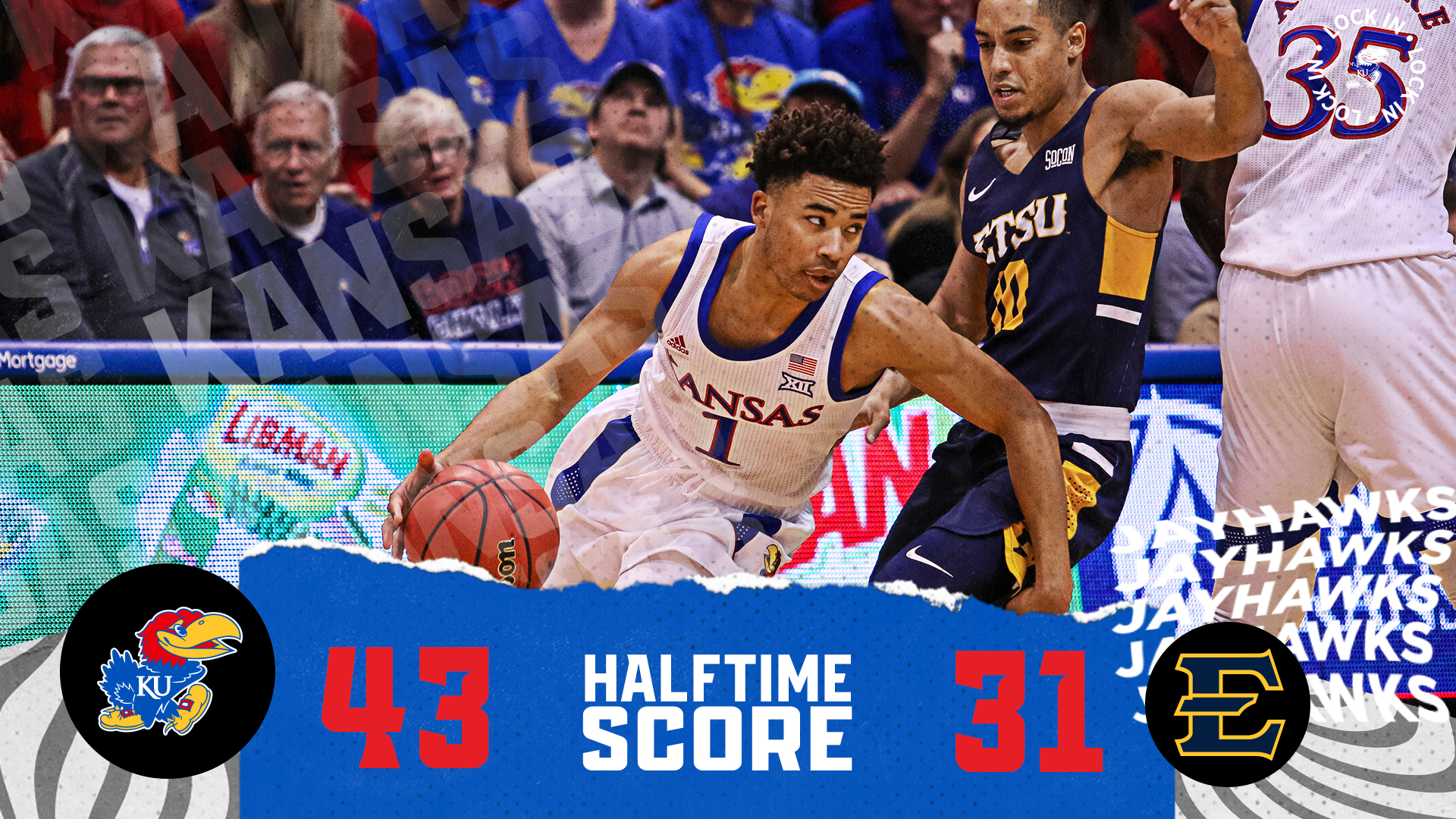 Locked in, ready to go. pic.twitter.com/S6N3iyqy1o

Taking the court to start us off vs. East Tennessee State 👇 pic.twitter.com/jIRfjXovow