Save for a single day, Jack Roche’s three-year run as a Kansas football student manager was a master class in reliability, selflessness and hard work. And even on that lone morning when Murphy’s law found its way into his dorm room, Jack still managed to prove his commitment to that job — and leave a legacy felt even after his passing.

Jack’s first year at KU was 2017, and while just a freshman, he had already proven himself one of the most dependable figures within his team. So when Jack failed to show up for work one morning ahead of an 11 a.m. kickoff, Larry Hare was puzzled. And as the hours rolled on and the missed calls piled up, that confusion turned to concern.

A student wellness check request was put in with the KU Public Safety Office, and a few forceful knocks later, everyone had their answer: Jack had simply overslept.

“I do realize I never slept harder in my life than when I was a college student, I get that,” recalls Hare, who serves as an assistant athletics director overseeing equipment services. “But something finally shook him.”

Jack had to show his I.D. to the officer, who less-than-subtly let him know his employer was looking for him. That’s when the panic set in. But instead of making excuses or finding a way out of the situation, Jack threw on the nearest clothes he could find, bolted outside and sprinted the 1½-mile trek north from Oliver Hall to David Booth Kansas Memorial Stadium — Hill and all.

“He apologized countless times,” Hare said. “I told him, ‘Jack, we know you. We trust you. We get it.’ It was a case where he had done so many things right, never been late, that you build up credibility for when ‘stuff’ happens.”

It was an experience that didn’t take anyone, including Jack, long to look back on with a laugh.

“It was funny hearing his roommate tell his side of that story last Friday,” Hare said, “how mortified Jack was that we had to get a police officer to go to his room just to make sure he was OK.”

Friday, as Hare referenced, was an evening that evoked both fond memories and raw emotion. Jack died on July 12, 2020, when he was struck by a vehicle while walking near his Chicago home. He was 21.

Last week’s gathering of friends, family, former colleagues and Jayhawk administrators at Six Mile Chop House served as a high point in a weekend where Jack’s legacy was honored in a multitude of ways. The goal? To ensure his shining star never fades.

“He was a young man that was incredibly amiable and affable and just really endeared himself to the rest of the group,” Hare said. “We always preach about being a great wingman to your coworkers here, and Jack was the epitome of that.” 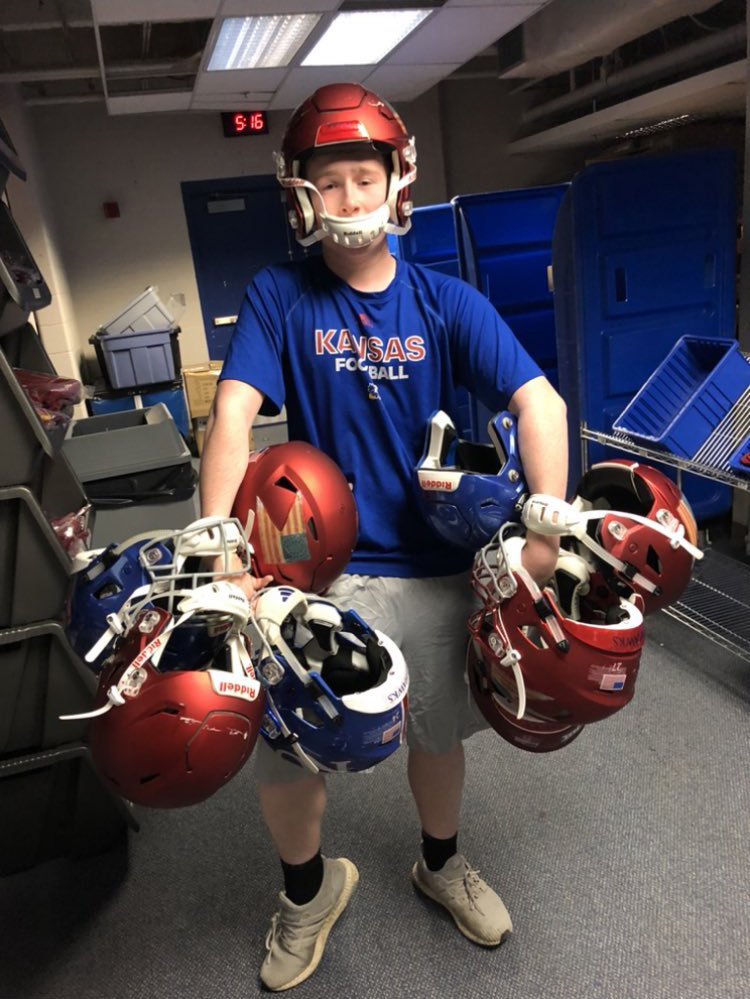 From the moment he started his job filming and editing his little brother’s baseball games at age 10, Jack had a clear vision for a career in athletics: He wanted to be in the game, but realized he probably didn’t have a future inside the hash marks.

“He wasn’t a great athlete by any means, but he always wanted to be part of a team. That’s why he got into managing,” said John Roche, Jack’s father. “He knew his limitations, but he knew being a manager was just as important as a player because a lot of stuff doesn’t get done without them. You need it. I think that made him feel good, knowing he was someone who affected what happened on the field.”

Jack honed his skills as a manager for several programs at Marist High School. When it came time to pick where he’d continue that maturation process, he had several options, including Minnesota and nearby Illinois. It took just one visit to Lawrence, though, for Jack to decide on his new home.

“He loved it there, absolutely loved it,” Roche said. “His job, he was more of the inside guy. He was in charge of handing out all the equipment, stuff like that. He always talked about how KU was a great fit. He was definitely happy he went there, and I’m glad he picked there, too.”

A go-to guy when Hare couldn’t get ahold of someone, Jack had a knack for problem solving. Hare got to know a young man who was “service-oriented,” “of great character” and “naturally migrated toward doing the correct thing.” And, it seems, Hare saw a bit of himself in Jack.

“Just about all of us that are equipment managers now started out as student managers,” he said. “We understand it’s a lifestyle choice and not a common one for most college students. It takes a unique makeup of an individual to want to do it.”

Like so many in the KU Athletics community, Hare was shaken when he learned of Jack’s passing. He recalls choking up during a Zoom meeting shortly after the news broke, considering his own high school-age son and the unimaginable grief he would feel should anything happen to him. So when Jack’s parents approached Hare and other KU administrators about their desire to see his impact immortalized, they didn’t have to do much convincing.

“These kids spend so much time with one another, but to do that and be one of the people that you keep wanting to go back to work and hang out with? You really want to embrace that, because it’s those kids that do it the right way that allow us to do our jobs,” Hare said. “These are young men and women that work substantially behind the scenes doing countless, thankless tasks, but do it because they’re doing their part to help the team win, to succeed. So when you get a young man that embraces that, and Jack was a prime example, you want to celebrate it.”

While the grieving process is ongoing, there has been plenty of celebration of late, too. That continued last week when Jack’s family was given behind-the-scenes access to a Jayhawk men’s basketball practice, field passes to the football team’s matchup with Kansas State and time with Bill Self, Lance Leipold and Travis Goff, among many others.

“Everyone went far and above. I couldn’t have asked for anything better,” Roche said. “It was such a great weekend. It was perfect.”

For many, the highlight of the weekend came at the Friday gathering, when the Roche family surprised a current football student manager, senior Oliver Cross, with an award and scholarship for “embodying Jack’s work ethic and spirit.” Cross had been led to believe the sole purpose of the evening was to dine with his former colleague’s family, a ruse he fell for “hook, line and sinker,” Hare said.

“He was clueless. It was great,” said Roche, who laughed and added: “Next year I don’t think we’ll be able to get away with the surprise if they know we’re coming in.”

Adam Sikes of KU Endowment played an integral role in getting that fund set up. With the help of their tight-knit community in the South Side of Chicago, the Roches have distributed 10 scholarships to students at Jack’s former schools. Jack’s brother Patrick, a sophomore at Illinois State, presented Cross with the honor — John tried to speak but was unable to get in more than a couple of sentences before the emotion overwhelmed him.

“I’ve done this for close to 30 years and this was one of the things I’ve been most proud to be a part of,” Hare said. “An evening that was very emotionally draining, emotionally taxing, yet we have something bright and something that we can carry forward into the future to take out of it.”

“I think it’s great. He’ll always be part of the KU family,” said Roche, fighting back tears. “Knowing that’s there and a part of him will always be there, it’s heartwarming. It’s a terrible situation, but we’re trying to make something good out of something that was just terrible.”

‘He was just the best’

As close as Jack was with his father, he wasn’t the one to first inform him of the snooze situation. That distinction went to Roche’s niece, who alerted him to a post from her cousin on social media: “Not everyone gets woken up by the cops because they’re three hours late to get to their job,” it read.

“He was always one that would definitely get up on time for school. I guess it was just one of those freak things. I’m sure he set extra alarms after that because he never wanted that to happen again, and it never did,” Roche recalled. “The funny thing is during our conversation about it he goes: ‘You would’ve thought the police would’ve at least given me a ride to the stadium!’ ”

It’s still difficult for Roche to talk about Jack, but when the words do come out, this much is clear: He’s a father beaming with pride for a son he and wife Kim did a magnificent job raising.

“Very loyal. He was the nicest kid around,” Roche said. “If you asked any of the other managers, they’d tell you he was very hard working, very smart and just an all-around great kid. And to me? He was just the best.”