A transfer from East Tennessee State University, Haynes-Overton entered her junior season with the Buccaneers needing 45 points to break 1,000 points. In November versus No. 23 Tennessee, the Nashville native posted a career-best 41 points and seven steals in the 72-68 loss. Haynes-Overton currently has 1,046 points on her career as she looks to begin her career at Kansas.

"Erica is an explosive athlete who is an elite, disruptive defender. Offensively, we love that she can get her own shot and plays with an aggressive, attacking mentality at all times. We’re excited to add a player mid-year who will improve our roster and program." 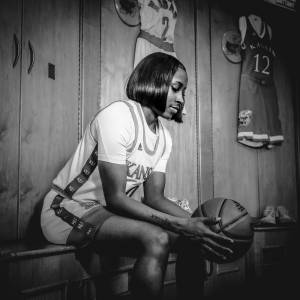 In 2018-19, Haynes-Overton led the Buccaneers in minutes (31.5), scoring (16.8), assists (3.5) and steals (3.1), and was the Southern Conference Defensive Player of the year for the second consecutive season. She also was tabbed All-SoCon Defensive Team and All-SoCon First Team. As a sophomore, she started all 31 games pouring in double-figures 28 out of 31 games and scored over 20 points eight times and over 30 points twice. Haynes-Overton finished the season fourth in Southern Conference in scoring, fifth in assists, seventh in free throw percentage, first in steals and fifth in assist/turnover ratio.

As a freshman in 2017-18, Haynes-Overton started in 29 games (played 30) where she averaged 14.5 points per game and scored in double-figures in all but four contests. Defensively, Haynes-Overton dominated as she finished the season tied for third in the NCAA single-season game records in steals with 11 against Murray State. She totaled 108 steals, which was eighth in the nation and sixth for steals per game. At the end, she was named the SoCon Defensive Player of the Year, the SonCon Freshman Player of the Year; as well as named to the league’s All-Freshman Team, All-SoCon Second Team and SoCon All-Tournament Team.

Haynes-Overton was ranked as the sixth-best player according to MaxPreps in the state of Tennessee out of East Nashville Magnet High School. The four-year varsity letterwinner led her team to the State Championship her junior year and Final Four her senior year. She finished her high school career with 2,000 points, averaging 23 points, three assists, nine rebounds, eight steals, and two blocks per game. She was named a District 10-AA MVP and named to the 2016 TSSAA All-Tournament Team. Haynes-Overton earned TSWA Class AA All-State Honors in 2016 and USA Today Second Team All-Mid-State Honors.