Head Coach of the Leipold Family

When Lance Leipold was formally introduced on May 3rd as the next head coach of the Kansas University football team, his wife Kelly sat right across from the podium.

“It’s been a journey with a lot of tough decisions and sacrifices,” Coach Leipold said to his wife at the beginning of his opening press conference. “You held our family together and I can’t thank you enough.”

The newest first lady of Jayhawk football met her husband nearly 25 years ago when he was coaching at the University of Nebraska-Omaha.

“I met Lance at the Bourbon Street Bar in Omaha,” she said. “I was just hanging out with my girlfriend when Lance and one of his friends walked over.”

A few weeks later, the pair was on their first date at an indoor arena football game on Valentine’s Day. Fast forward to today, the two have been happily married for 22 years. It’s a journey that has taken her from the Midwest to the New York area and now to Lawrence, Kansas.

Through it all, the couple has welcomed change with open arms. While the common concerns about the unknown have always been conversation topics, fortunately for both Kelly and Lance, those reservations have always worked themselves out quite quickly.

“We’ve always talked about [those reservations] openly as husband and wife, and with our children,” she said. “There was a little bit of hesitation [about our move to Lawrence] at first because our son was in such a good place at Buffalo. He just had a really close group of friends, and it has always been important to us that every member of our family feels comfortable about our decisions.”

While their youngest son Landon is about to enter high school, their daughter Lindsey is finishing up college at Stetson University with plans of attending graduate school at KU. Leipold looks at this new adventure as a benefit to both children.

“It’s good to have lifelong friends in multiple states,” she added. “Since our arrival here, our son is ecstatic. Our daughter swears she is moving back in with us and wants to get her master’s degree here from KU.”

Kelly, who was born in Wisconsin, knew returning to their Midwest roots was something that she and her family wanted to come back to eventually.

“We could have shut all this down and probably had a lifetime contract at Buffalo,” Leipold noted. “We could have ridden this out and retire, but my husband wasn’t ready. He still has so much passion and a lot to offer. So, it really just required a buy-in from our kids, and if you saw them right now, you would see how happy they are.”

She is equally excited about being in a college town like Lawrence—a place that is all about supporting and celebrating the Jayhawks.

“We want to be an integral part of this community and help in any way we can,” Leipold said. “The people have given us such a nice and heartfelt welcome, and we couldn’t be more excited about starting our new journey. Hopefully, we have a smooth and quick transition now.” 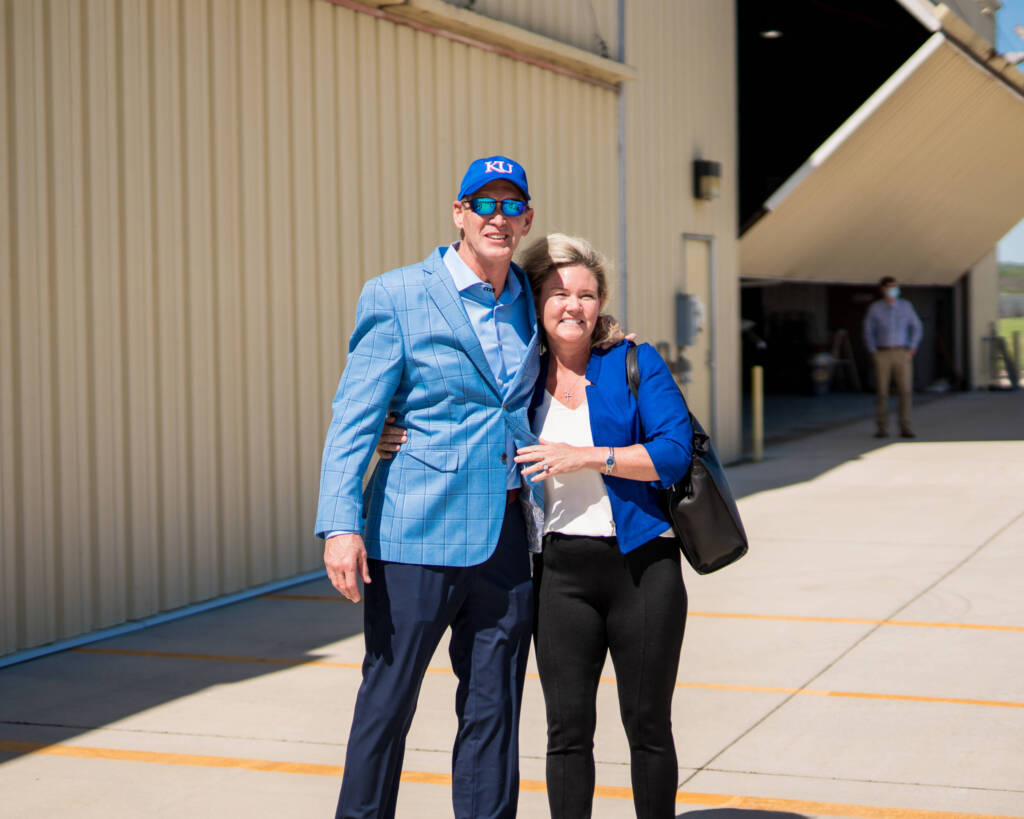 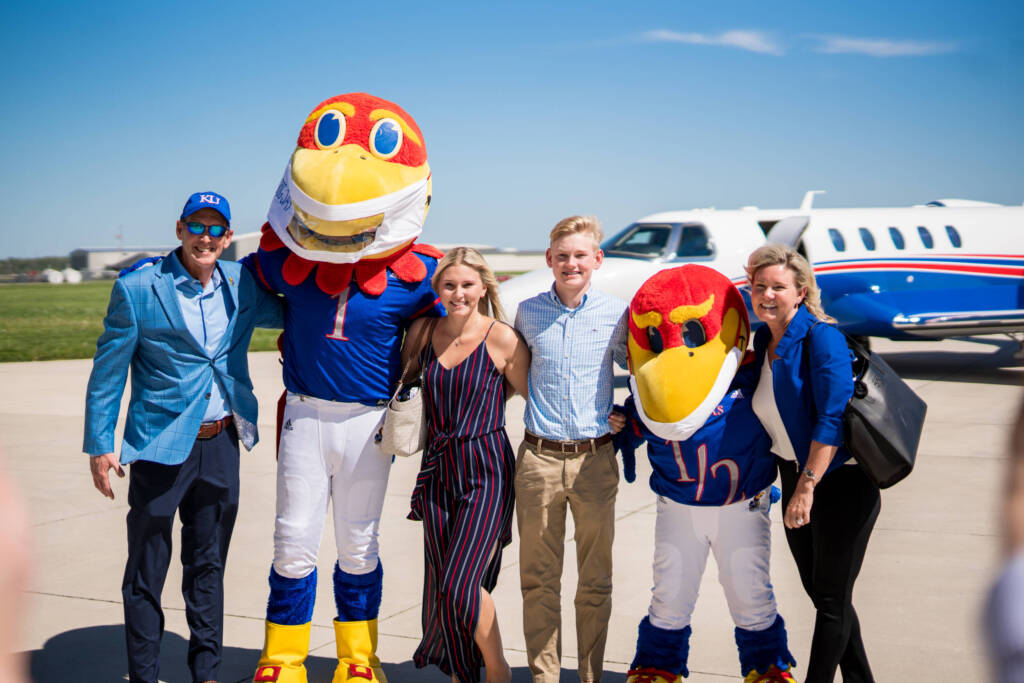 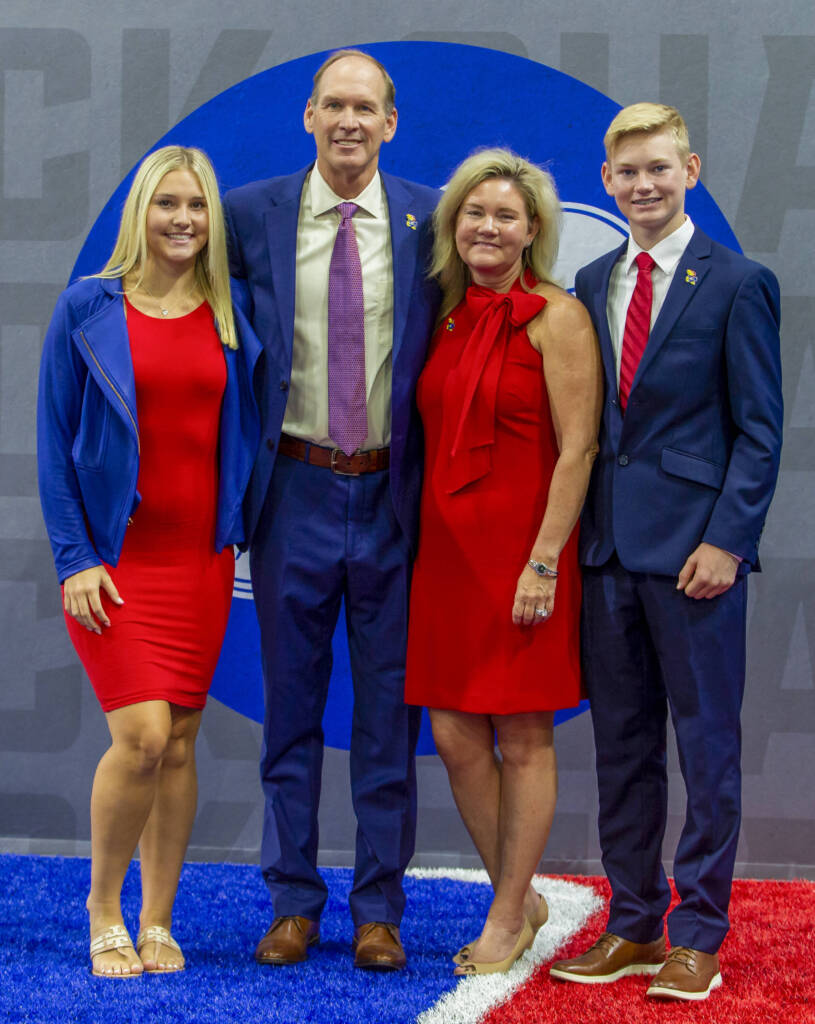 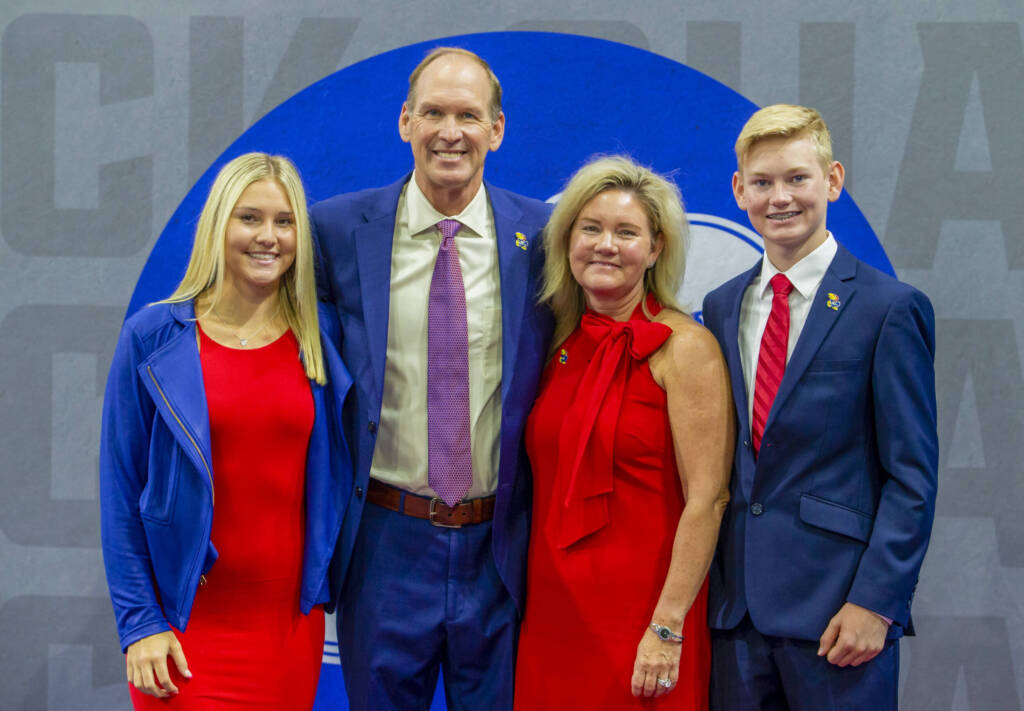 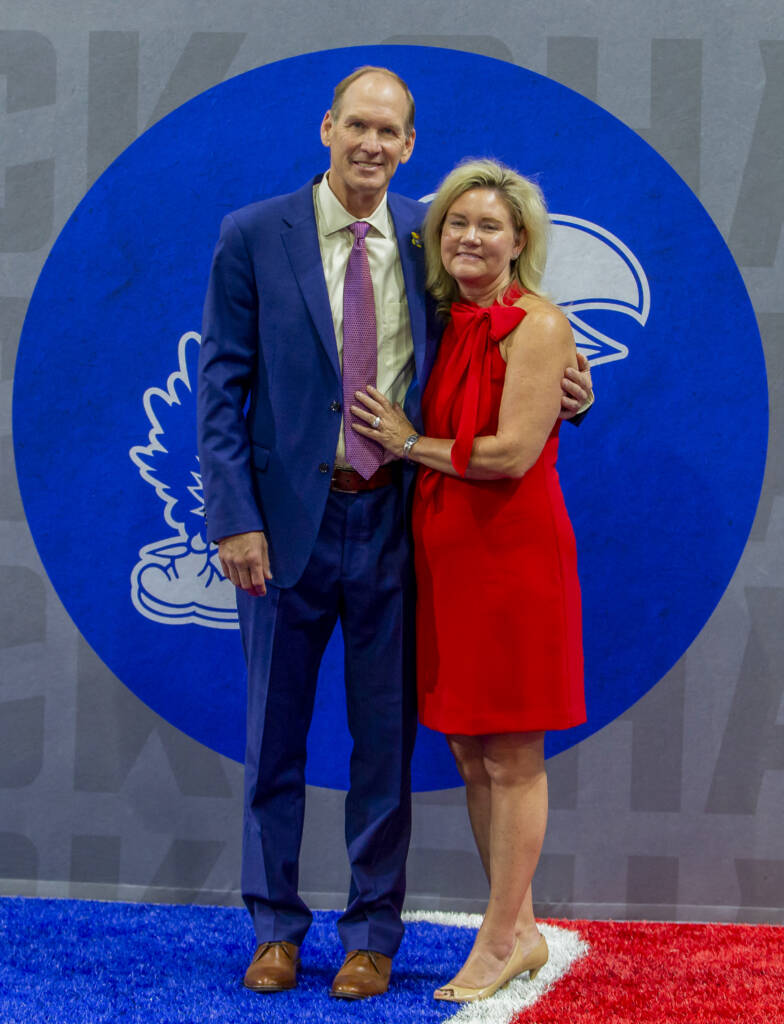 Most members of this community know about her husband’s record and accomplishments on the field. All of his remarkable success stories didn’t go unnoticed. But what most people aren’t aware of yet is that everything is about family for the new head football coach.

“My husband is a huge family man,” Leipold said. “He realized early on in his career how much he values being around his family. His favorite hobby is to relax and spend time with his family.”

On the football field, Kelly knows her husband’s relationship-driven and family-oriented approach can be felt by both his players and coaching staff as well.

“He will give his shirt off his back to anyone,” she noted. “That’s just him. He’s very trusting and very caring. He’s definitely a Midwest guy.”

That Midwest attitude is also reflected in coach Leipold’s coaching style. Not only has he taught young men how to win on the football field at his previous coaching stops, but he’s also showed them how to be winners off the field and in life. It’s an important piece that Kelly wants not just the players to realize, but also fans.

Despite the short window until the Jayhawks kick off their season against South Dakota on September 4th, Leipold is optimistic and excited about the Jayhawks’ future and what her husband can bring to the program.

“We’re really excited about seeing this program grow and improve day by day,” she said. “I can’t wait for the players to buy in and realize that he’s the right person to lead them.”