By reeling off seven straight conference victories (and counting), KU has tied its program record for most consecutive Big 12 wins, a mark that dates back to the league championship-winning squad from 1996-97. The Jayhawks’ 10 wins against conference opponents are their most since the 1999-2000 campaign. And, perhaps most importantly, the team has secured its first winning record in Big 12 play in 22 seasons (with four games left to play).

So, how has Coach Brandon Schneider’s group done it? What’s fueled the turnaround from 3-15 in league play a season ago to a team knocking on the door of March Madness? Here’s an inside look at the team’s seven-game winning streak as told by three key contributors: junior guard Zakiyah Franklin, redshirt sophomore guard Chandler Prater and sophomore forward Ioanna Chatzileonti.

Prater: “Demand Respect” has been our motto this season. Coach Brandon came up with that. It’s kind of a reminder of where the league placed us, what they thought of us in the preseason. We’ve been an underdog for a long time, but we’re changing the narrative.

Chatzileonti: From the moment the new girls first stepped on the court with us and we practiced as a team for the first time, I really thought we had a chance to have a special season. Chemistry has been the biggest difference this year. We’re all together as a family.

Franklin: The work we put in this offseason together, just seeing it come to light, it feels amazing, honestly. The biggest difference this year is that we just finally have all the right pieces to the puzzle. We have a lot more depth at every position. Our defense has been tremendous, and we’ve really come a long way in those toughness stats we harp on — rebounding, free throws and getting to the bonus first.

KU didn’t glide into its seven-game winning streak. A heartbreaking home defeat to perennial power Baylor on Jan. 16 — the Jayhawks held a four-point lead with 14 seconds left but couldn’t hold on — was the first loss in a stretch that saw KU drop three of four. The team fell 77-62 at Iowa State on Jan. 26, an outcome that put it below .500 in Big 12 action.

Chatzileonti: We made a promise within the group that a performance like that wouldn’t happen again. We knew we just had to take it one game at a time. And we kept believing in each other.

Franklin: We just knew that stretch didn’t define our season. We were all confident in each other. We knew we had what it took to turn it around — and right away, too.

Prater: We knew it was going to be a competitive season. There’s no walking through the Big 12, especially with how many ranked opponents we have. We were focused on bouncing back and locking into the next one. That’s what you have to do in this conference. 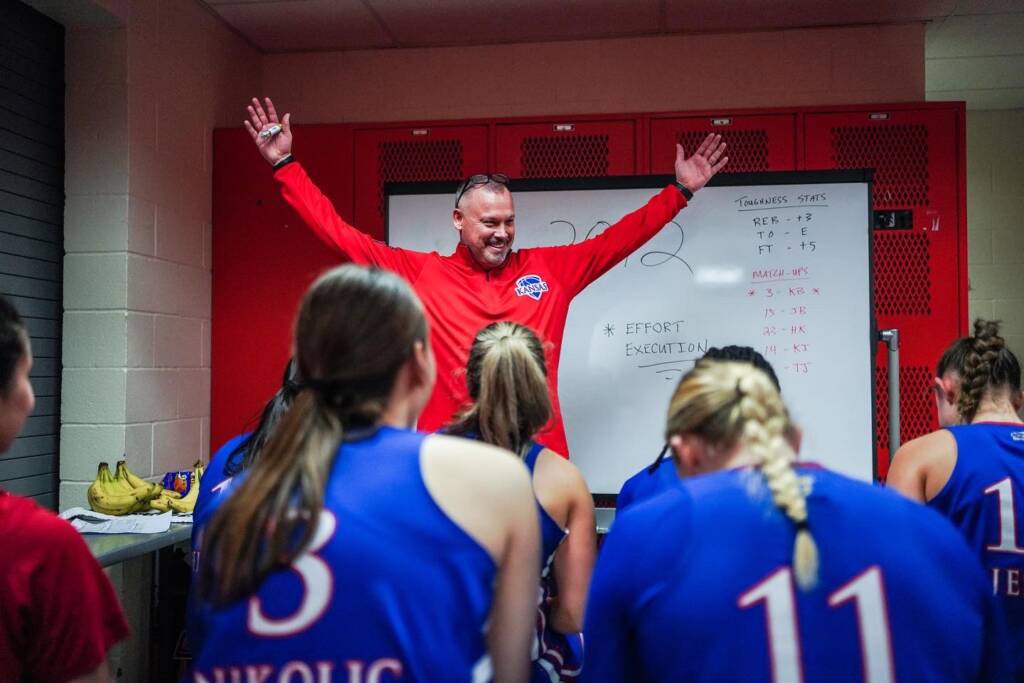 Junior guard Holly Kersgieter, an Oklahoma native, notches 17 points and 14 rebounds for her first double-double of the season. Prater finishes with 13 points, including an eight-point burst in a first quarter that sees KU go on a 12-0 run. The Jayhawks earn their first victory in Stillwater since 2012.

Prater: I was just really locked in. We needed to bounce back. I was ready to do whatever it took to win that game. I told myself at the beginning of the season that I wanted to grow and get better every single game. It definitely feels like I’ve found my groove right now, but I want to play my best ball in the postseason.

Chatzileonti: I remember the way Chandler was that spark off the bench for us. Everyone on the court with her wants to match her energy when they’re out there with her.

Prater: I just admire Holly. She’s focused. Nothing fazes her in a game. Obviously she’s one of the best players in the conference. She’s always prepared to compete.

Chatzileonti: I actually missed that trip with an illness, but I watched the game on a stream — well, not from the beginning, because I had some Internet troubles. Whether I’m on the court, on the bench or somewhere else, I’m always going to be invested in this team. I was rooting hard — and yeah, I was yelling a little bit, too.

A 20-0 run that spans parts of the third and fourth quarters helps KU erase a 14-point deficit. Chatzileonti scores 13 points and hauls in eight rebounds. With back-to-back wins against the Cowgirls, the Jayhawks take their first season sweep over OSU since the 1995-96 season.

Chatzileonti: At halftime, Coach said we weren’t playing hard enough. He told us we had to start rebounding better. With me, he’s always saying, “Crash the boards! Crash the boards!” I definitely heard him this time.

Prater: Ioanna is a great example of hard work and paying attention to the details. She comes into practice ready to work every day, puts up shots after. You can just tell she’s dedicated to improving her craft. That obviously makes a huge difference on the court. I’m sure she isn’t done getting better. 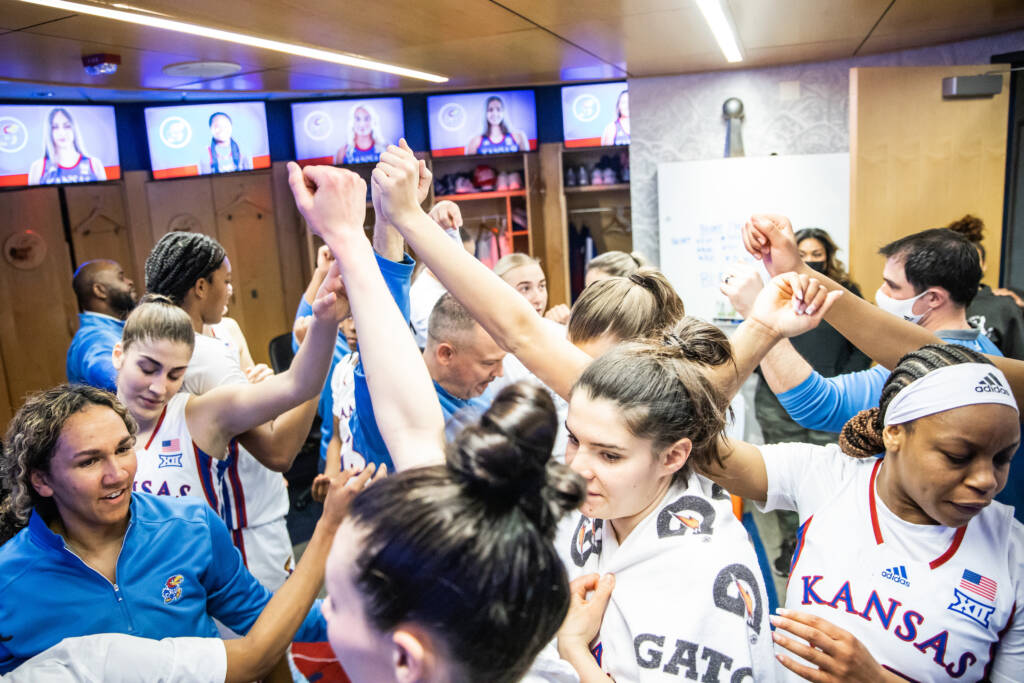 Leading by just one after three quarters, KU outscores TCU 27-13 in the fourth to win comfortably. Prater posts 17 points and eight rebounds off the bench, while junior center Taiyanna Jackson comes up big with 13 points and 17 rebounds. The Jayhawks earn a season sweep of TCU for the first time since 2012-13.

Chatzileonti: Taiyanna, she’s killing it, and she’s going to keep killing it. She’s so good. I’m glad that she came here and we’re teammates. She’s an awesome basketball player and an awesome girl.

Franklin: Taiyanna does a lot for us. Whether it’s rebounding, defending, being that presence in the paint or finishing overall, just having her is a game-changer.

Chatzileonti: We’ve gotten better at closing as this season has gone along. That was something we talked about a lot in the offseason, being a team that always wins the second half.

Franklin: Our execution is just so much better, even compared to earlier this year. We had the Baylor disappointment and felt we didn’t close as well as we should, so we were all focused on fixing that.

KU holds West Virginia to 33.3% shooting, notches a plus-18 rebounding margin and connects on 23 of its 26 free-throw attempts to earn its first victory in Morgantown since 2013. Franklin gets 17 points, while Prater contributes 12 points and seven rebounds off the bench. Four Jayhawks finish with at least five boards.

Franklin: Rebounding and free throws, those are toughness stats. We take pride in those.

Prater: We emphasize them every day. You’ve got to be physical in this league. West Virginia always is. That’s what they’re known for. We wanted to make sure we were setting the tone and letting them know early that we were going to compete.

Tied at 45 with six minutes left to play, the Jayhawks hold their rivals to two made field goals the rest of the way and outscore the Wildcats 18-6 down the stretch. Prater scores eight of nine team points during the game-sealing rally. KU again wins big on the boards, this time to the tune of a plus-17 rebounding margin.

Franklin: The atmosphere was honestly like nothing we’ve seen so far this season. We were able to bring out a great crowd, and that obviously played a part in how we played on the court. We knew they had the presence of Ayoka Lee in the paint, and we had to stop her down the stretch if we wanted to get the win.

Chatzileonti: It wasn’t our best game, but the crowd was huge for us. I’ve never experienced that at Allen Fieldhouse. It was a game with many emotions. We played for each other in the second half. And beating K-State is always fun.

Prater: Just the fact that it’s a rivalry game alone gets everyone a little more juiced up, a little more motivated. We had a great crowd and a great turnout, so we were grateful for that. We just had to beat them, and we were going to do whatever it took. 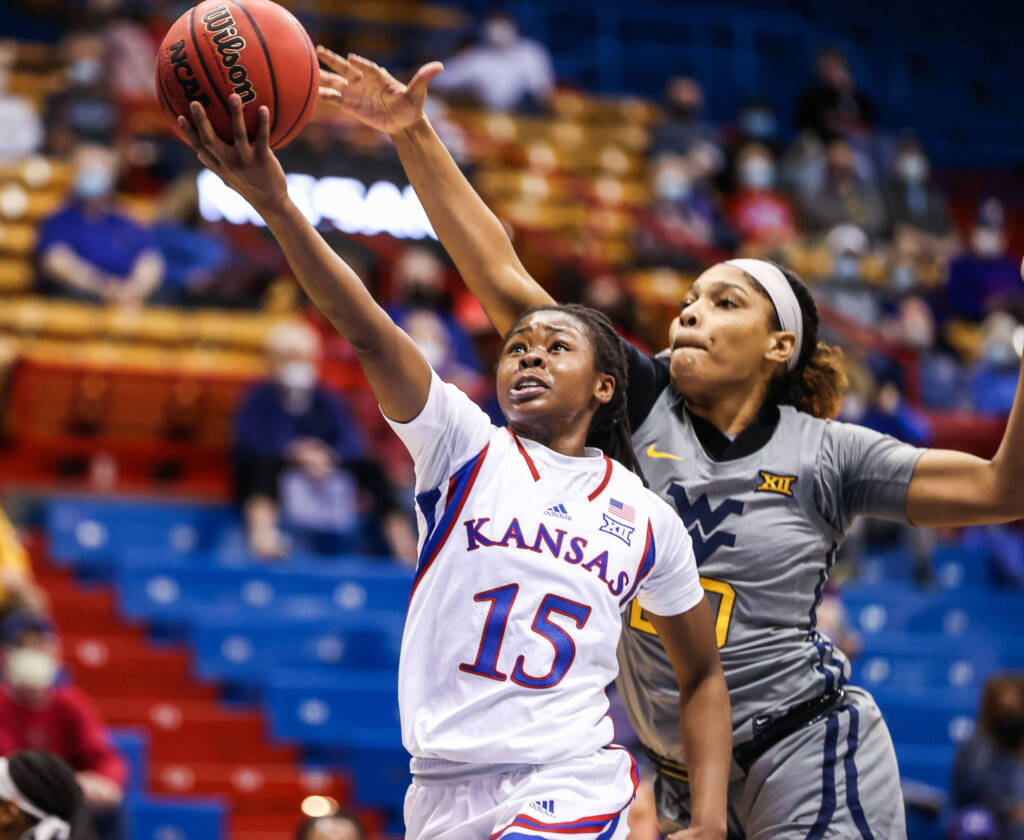 Powered by a 25-point outburst from Franklin, KU gets its first ever season sweep of West Virginia. After the game, Schneider lauds the toughness and conditioning of Franklin, who went 37 minutes and played the role of floor general against the swarming Mountaineers.

Franklin: Holly went down at the start of the game. Obviously she’s our leading scorer, so we all knew we had to step it up. After the game Coach said he’s proud of me and how I performed. As he would say, I had some “grown-up finishes.”

Prater: I just remember how fearless Zakiyah was. She was finishing. She was handling the ball and handling their pressure well. She was locked in and setting the tone to what the rest of us needed to bring to the table.

Franklin: I’m not going to lie, I definitely felt the 37 minutes after the game. But the recovery and turnaround were pretty quick, so it was smooth. I was fine.

Prater: Zakiyah, she’s always going to put on a tough face. She’s never the type to let you see her down. But as her teammates we know how hard she works and we appreciate her — even if she does put on a face sometimes.

KU overcomes a 13-point halftime deficit thanks in large part to a 24-9 advantage in third-quarter scoring. Kersgieter’s layup with 24 seconds left gives the Jayhawks the lead, and the junior hits a pair of free throws to ice it. Schneider and KU assistant coaches are ambushed with water bottles in a rowdy postgame locker room celebration.

Chatzileonti: We went into the halftime locker room and said we cannot let each other down. We had to keep fighting. That was going to be a huge game for us when it comes to our NCAA Tournament hopes. We had to have that win.

Franklin: Honestly the halftime message was, just go out there and be us. We felt like we were kind of beating ourselves, not following the scout and the defensive game plan. We’ve been a better second-half team during this stretch we’ve been on, so we knew we could go out there and turn things around.

Prater: It definitely was a big win for us. I obviously love beating K-State — those are always going to be my favorite wins — but this one was redeeming just to know how far we’ve come from past years in terms of not closing out games.

Franklin: We were all excited after the game, fully enjoying the moment and realizing we were mature enough to get the job done. We had a little water going on or whatever. I think the coaches got the worst of that, for sure.

Franklin: This matchup means everything to us. We know that when we went to their home it didn’t go the way we wanted. We fell behind early and it got out of hand. Going into this next game, we want to show how much we’ve improved and hopefully pull out a win.

Prater: Every player came here to make a difference and return Kansas to our former glory. It’s exciting to know we’re taking those steps and we’re getting there.

Franklin: No matter what happens, I’m extremely proud of this team. This stretch we’re on just goes to show that no matter what our roster says, we’re a very mature group. We’re maturing every game, and we’re just continuing to get better. 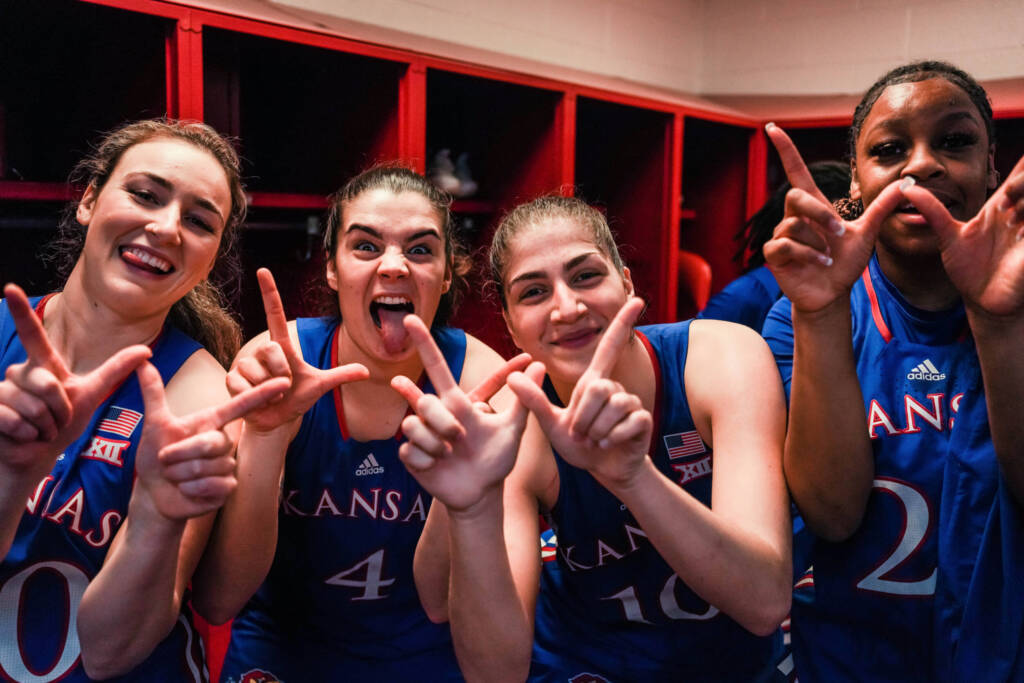