Jake Schoonover knows a thing or two about the process.

Take it from a guy who had side jobs and crashed as the third roommate in a two-bedroom apartment. In his first three years at the job, he made a grand total of $750.

Money was tight. Things got rough. But he kept grinding.

As the Special Teams Coordinator and Defensive Ends Coach for the Jayhawks, that’s the mentality he hopes to instill in his current players—believe in the process and control the things you can control.

“There are a lot of kids here that really want to win games and get better,” Schoonover said. “They just don’t know what they don’t know right now. Many of these kids have to learn how to win, how to compete and how to do the little things right.

They’ll learn, as Schoonover learned—and is still learning from coach Lance Leipold—that every little detail is a part of the process.

A moment of uncertainty

The recent coaching change when Leipold took the reins of the Kansas Football program is another situation where Schoonover was reminded of a valuable lesson.

He always talks about sudden change to his players and the ability to handle adversity. As coaches, sometimes it’s easier to talk about it, but when it actually happens to you, Schoonover admits, it’s not so easy.

“I’ll be honest, I really didn’t know what to expect when Lance Leipold became the head coach here at Kansas,” Schoonover said. “I was excited for the University of Kansas family, but at the same time, I was nervous for the Schoonover family.”

Schoonover had just gotten here a few months before Leipold’s arrival. In the coaching profession, it’s accepted that you might have to move your family anywhere, any time.

Nothing is guaranteed, especially when there is a regime change.

Schoonover was actually in a similar situation at Bowling Green. The team was six games into his first season when the head coach was let go.

It was a scary time for the veteran special teams coach.

But ultimately, he realized that some things are out of his control.

“You put your stuff together, present your case, and leave the rest in God’s hands,” Schoonover said. “It was obviously tough coming here and then not knowing exactly what the future holds.”

What was even tougher for Schoonover was telling his family that he didn’t know what was going to happen.

So, when Coach Leipold “re-hired” Schoonover, it was like the weight of the world had suddenly been lifted. He looked his 2-year-old in the eyes and said: “Hey, we’re staying right here.”

It’s hard for Schoonover to describe what that moment meant to him.

“I even get a bit emotional just thinking about it” the coach said. “It was life-changing, it really was. Having grown up in the Kansas City area, this program, this community, this spot, has a special place in my heart.” 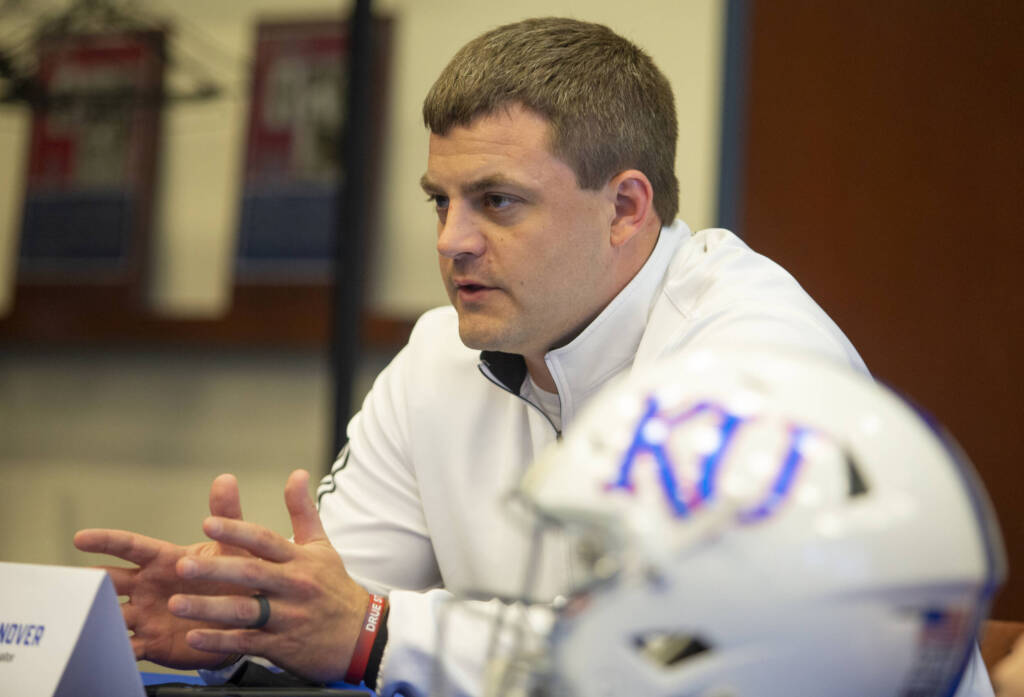 Believing in the process

For Schoonover, at Kansas, it’s all about believing in the process.

He’s not ashamed of the struggles he endured when he started on his coaching path. He’s a believer that everything he went through made him a better coach and a better teammate. It made him grateful for all of the opportunities he experienced.

“For me, it’s about serving and showing leadership,” Schoonover said. “Just having the mindset that you might be the one barking orders on the field, but you’re there to serve the rest of the team. Having that mindset instilled in me by my parents and former coaches growing up helped me understand the journey. It made me realize it’s all a part of the process.”

That’s the mentality Schoonover aims to bring to work on a daily basis.

To him, in life, sports, coaching, or any other area, the goal is to leave every place better than when it was found.

The goal is to make places better, make a difference, and make a positive change.

“At the end of the day, it’s about controlling what you can control and understanding your everyday approach” Schoonover said. “It’s all about trusting the process, something Coach Leipold has us doing right now.”