NOTE: The Kansas Jayhawks are set to take on the Houston Cougars this Saturday, Sept. 17, at TDECU Stadium in Houston. It will be the first matchup between the programs since the Jayhawks’ memorable victory over Houston in the 2005 Fort Worth Bowl.

Below is the recap and postgame notes from that game:

FORT WORTH, Texas – The University of Kansas closed out the 2005 season with a 42-13 victory over Houston in the Fort Worth Bowl Friday night, Dec. 23, at Amon G. Carter Stadium. The win gave the Jayhawks their first bowl victory since winning the 1995 Aloha Bowl and the most wins (seven) in a decade.

Junior Brian Murph put Kansas (7-5) on the board early when he returned a Houston punt 85 yards for a touchdown. The punt return for a touchdown was the first of Murph’s career and KU’s longest of the season. Sophomore Scott Webb kicked the extra point to give the Jayhawks a 7-0 lead 10:26 into the game.

Houston (6-6) scored its first points of the game in the second quarter (14:22) when freshman Ben Bell kicked a 32-yard field goal. Kansas answered on the ensuing possession with a five-play, 60-yard drive that resulted in a 13-yard shovel pass from senior Jason Swanson to junior Jon Cornish for a touchdown. Webb converted on the extra point to give KU a 14-3 lead. 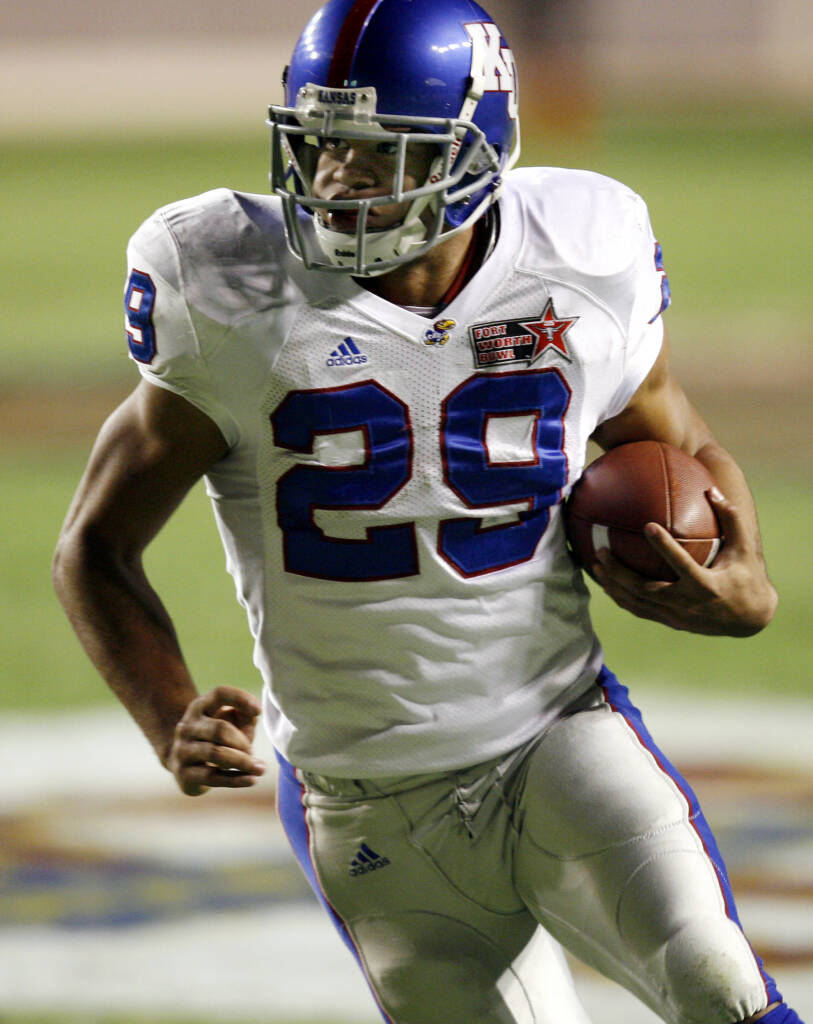 The Cougars capped a 42-yard, seven-play drive with a touchdown when junior Kevin Kolb scored on a one-yard keeper with 57 seconds remaining in the half. Bell’s extra point brought UH within four, and KU headed into the break leading 14-10.

The KU defense struck early in the second half when senior Theo Baines intercepted a Kolb pass and ran it 16 yards to KU’s 30-yard line. Two plays later, Cornish took another shovel pass from Swanson (12:43) 30 yards for his second touchdown of the day and 11th of the season. Webb’s kick gave the Jayhawks a 21-10 advantage.

KU pulled away when senior Charlton Keith picked off a Kolb pass at the Jayhawks’ 14-yard line 2:37 into the fourth quarter and ran it in for a touchdown. The interception was Keith’s first and marked his second career touchdown. Just over a minute later, Baines nabbed his second interception of the day, giving KU the ball on the UH 46-yard line.

Murph scored his second touchdown of the day in the fourth quarter, a 48-yard pass from Swanson, to give the Jayhawks a 42-13 advantage.

Swanson threw for four touchdowns and had 19 completions on 29 attempts for 307 yards in the final game of his career. Swanson joined Kolb as the teams’ 2005 Fort Worth Bowl MVPs.

– Senior LB Nick Reid ended his career with his 42nd straight start. He started every game since the seventh game of his freshman year.

– Junior RB Jon Cornish scored on a 13-yard shovel pass from Swanson in the second quarter. It was his first TD reception of his career and his 10th touchdown of the season overall.

– Cornish scored on a shovel pass again in the third quarter on a 30-yard play for his 11th TD of the season which ranks in a tie for ninth all-time at Kansas. It marked the most touchdowns by a KU player in a single season since QB Bill Whittemore had 11 in 2002.

Kolb went on to play seven seasons in the NFL for the Philadelphia Eagles, Arizona Cardinals and Buffalo Bills. He started 21 games and throw for better than 5,200 yards and 28 touchdowns in his NFL career.

– Senior DE Charlton Keith picked off a Kolb pass in the fourth quarter and returned it 14 yards for a touchdown. The INT was the first of his career, while the touchdown was the second of his career. He also scored on a fumble recovery against Toledo in 2004.