For the first time since the 2012-13 season, the Kansas Women’s basketball program will go into the Big 12 Conference Tournament with a winning record. The Jayhawks currently sit with an overall record of 15-13 as they head to Manhattan, Kan. this Sunday to take on Kansas State in their last game of the regular season.

From the beginning of this season, the potential was there for the team. The Jayhawks welcomed seven newcomers: five freshmen and two transfers. Early on, the young Kansas team displayed powerful chemistry on the court, which pushed them through non-conference play undefeated. Kansas had the momentum it needed heading into a tough conference slate.

In the beginning of Big 12 play, Kansas dropped four straight games, but some Jayhawks were able to show off their skills, and eventually, on Jan. 18 against Texas Tech, KU notched its first conference victory of the year. Senior Mariane De Carvalho led the team that game with 16 points, followed closely by junior Tina Stephens with 14. From that point on, those two, along with freshmen Zakiyah Franklin and Holly Kersgieter and sophomores Aniya Thomas and Brooklyn Mitchell, continued to be leaders for this youthful team as they developed their game.

Now with four conference wins, these players have upheld their roles and have shown the potential of this program. De Carvalho, Stephens, Franklin and Thomas still average more than 10 points a game, Kersgieter and Mitchell are not far behind, averaging 9.8 and 8.9 points per game.

“We have a very young team, and I think that they’ve grown to have a much better understanding of poise and composure. There are really good teams in this league, and they’re going to make runs at you, but we continue to fight and trust each other,” Kansas head coach Brandon Schneider said in his press conference following KU’s most recent conference win, Oklahoma State on Feb. 29.

Three of Kansas’ four conference wins have come in the last five games. This alone shows the team’s growth throughout the season. They are able to execute and finish plays where they were failing at the beginning of the season.

Not only have the Jayhawks grown as players on the court, but their mentality has improved as well.

“You have got to move onto the next play, and that’s whether it’s in the fourth quarter or it’s in the first, and I think that’s where our team has made significant progress,” said Coach Brandon.

All this being said, some players have stepped up as leaders and strong performers on the court. In the last three games, Stephens has recorded three consecutive double-doubles, with the most recent against Iowa State on March 3, where she also set a new career-high in rebounds with 17. Consistency is the key for Stephens. In games where the execution seems to be faltering, she still puts all of her efforts into finishing what she is known to be able to do. 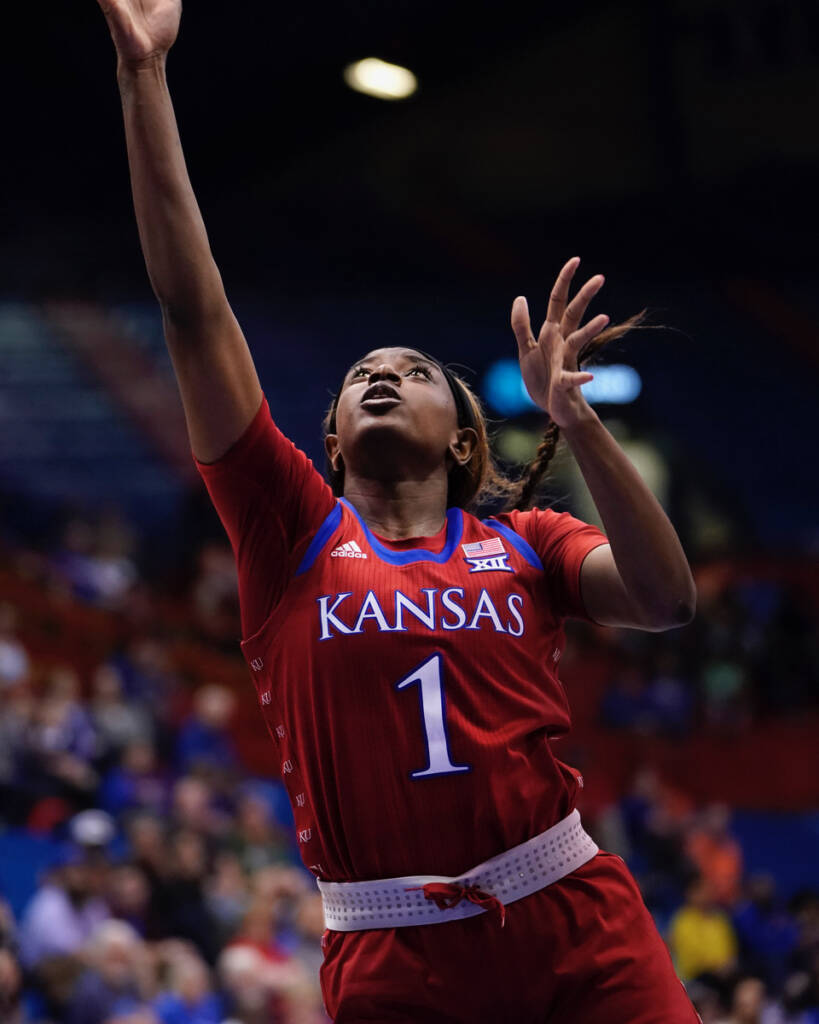 Thomas and Franklin are two more top-of-mind consistent players. Thomas has the highest points per game average with 12.6, and Franklin trails close behind with 12.1. The freshman-sophomore duo will only get stronger as they gain experience and continue to work on their game for the upcoming years.

Kansas came into this season expected to have a tough conference run, but it exceeded many expectations this year. For the first time in seven years, the Kansas Jayhawks will finish the regular season with a winning record.