LAWRENCE, Kan. – Kansas women’s basketball has started both of its 2020-21 season games strong with intense defense and quick scoring. Many players have begun to find their niche on the court, but sophomore Holly Kersgieter has known her three-point shooting niche for quite some time.

Kersgeiter set the precedent for her scoring abilities last season when she shot .405 from outside the three-point arc. This landed her ranked ninth in the KU Women’s Basketball record book for her individual single-season three-point percentage.

In the Jayhawks game Sunday against Texas A&M Corpus Christi, the team sank 11 three-pointers. Five of the 11 three-pointers came from Kersgieter, who began her shooting streak with 8:05 left in the first quarter.

“I think Holly is an active, very high energy player every time she steps on the floor,” Brandon Schneider, KU women’s basketball head coach, said. “We expected to see multiple defenses and I liked the way we executed early when they played a little zone early and Holly was able to knock down some shots.”

Kersgieter finished the first half of the game against the Islanders with 13 points, six of those points from the half being three-pointers. Sophomore Zakiyah Franklin also posted three-pointers in the half, going 2-2 from outside the arc.

Kersgieter has not only found her footing this year but also posted impressive numbers last year. In the 2019-20 season, Kersgieter made 53 three-pointers on the season while also shooting .422 from the field. Kersgieter’s highest totaled 3-point shooting game last year was against Wofford College where she went 5-9 (.556). She also put up 24 points against Indiana State to open 2019 game play. 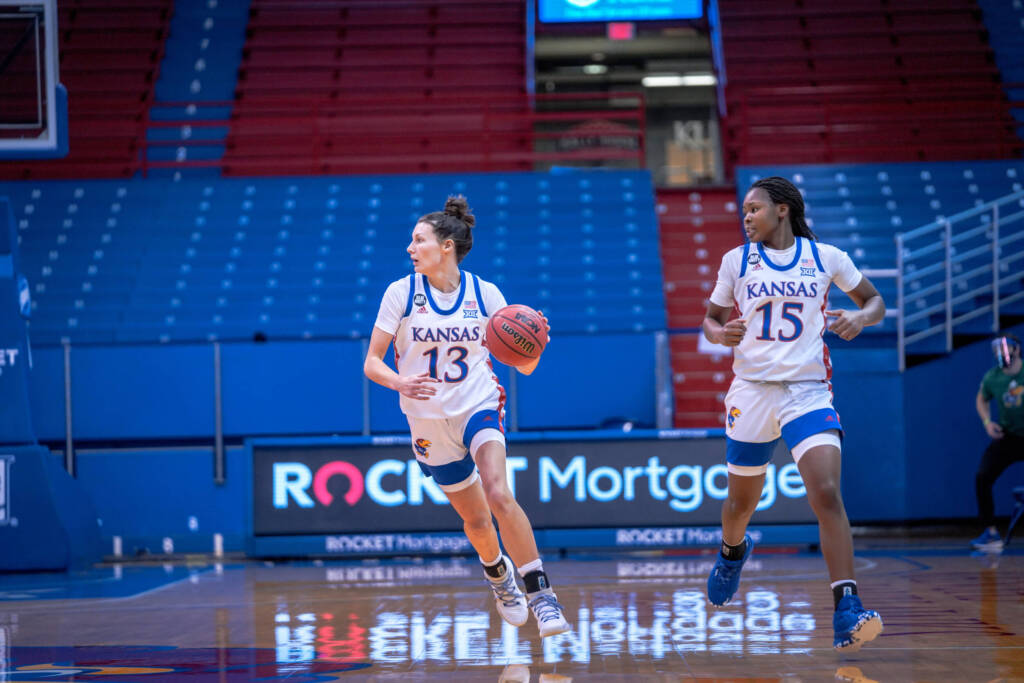 Last game against Northern Colorado, Kersgieter made her first three-pointer in the final few seconds of the first half. The second-year shooter again found her stroke in the second half, setting herself up for a strong finish. She completed the game with a total of three three-pointers and 21 points overall, including her second career double-double.

The depth of the KU bench was found in the team’s first game and has continued to show its effect. Nine of 10 players scored in the first game of the season against Northern Colorado, running plenty of fast-break plays. On Sunday, 12 players on the team scored, Kersgeiter topping the chart with 17. Senior Tina Stephens followed close behind with 13 points and six rebounds.

The Jayhawks’ defense started strong against Texas A&M Corpus-Christi. KU started the game out on a 15-0 run and their competitive defense forced 11 turnovers for the Islanders, only four minutes into the second quarter. The Jayhawks scored 30 points from Islander turnovers.

“I think we just have to keep working hard like we are doing everyday in practice, together and just playing with pace. I think that helps a lot on the defensive side, playing with a lot of hype energy and a lot of pace” Stephens said.