LAWRENCE, Kan. – The Jayhawks won its second straight game in dominant fashion, beating the University of Illinois at Chicago 91-50 on the back of 17 points from leading scorer Aniya Thomas and a double-double from newcomer Tina Stephens.

Kansas opened the contest on a 13-5 run and never looked back. The Jayhawks were able to force eight turnovers by the Flames in the first quarter alone which contributed to their commanding 27-14 lead by the end of the first.

Going into the second quarter the Jayhawks picked up right where they left off, opening the quarter on a 9-0 spurt that helped propel them to a 39-26 lead at the half. Kansas was able to hold UIC to just 34 percent shooting from the field in the first half.

The final quarter featured KU continuing to dominate, winning by a final of 91-50.

Kansas exhibited a strong effort on both offense and defense. Offensively, the Jayhawks had five players in double figures, including 17 from Aniya Thomas and a double-double from Tina Stephens where she posted 15 points along with 10 rebounds. Defensively Kansas forced 20 turnovers by the Flames and held them to 28 percent shooting from the field.

The Jayhawks take on Omaha at Allen Fieldhouse on Wednesday, November 13, at 7 p.m. Tune in on Big 12 Now or ESPN+.

Tina Stephens cashing in on her 15 pts and 10 rebs

Through three quarters, Aniya Thomas has 17 points 6 rebounds and 4 assists. 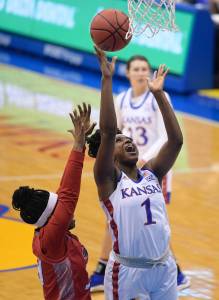 Tina Stephens has 8 points and 7 rebounds in the first half.

Zakiyah Franklin is 3-of-4 from beyond the arc and leads the Jayhawks with 9 points.