LAWRENCE, Kan. – Kansas Women’s Basketball improved to 6-0 on the season Wednesday Night, defeating Texas A&M 74-42 at Allen Fieldhouse for the Jayhawks’ first time since 2003. The margin of victory is the largest for KU against Texas A&M and the Jayhawks snap an 11-game losing streak to the Aggies.

The Jayhawks were led by Holly Kersgieter, who scored a season-high 23 points and recorded 9 rebounds, 3 assists and 3 steals. Senior Taiyanna Jackson added her fourth double-double in six games with 16 points and 11 rebounds, while Zakiyah Franklin had 15 points and Wyvette Mayberry chipped in 10.

"I thought we did a lot better job of guarding the ball. I thought we were assignment-correct, whether it was personnel or action, and I thought we played really committed defensively. We didn’t get the best version of Texas A&M tonight, they're a really talented team at full strength, but I was proud of our attention to detail, particularly on the defensive end."

After a slow start for both teams, Kansas led 14-13 after the first quarter. Texas A&M was able to keep it close in the second quarter, however, a dominant first half performance by Kersgieter kept the Jayhawks ahead at half. Kersgieter drained back-to-back threes at the five-minute mark and collected 12 points, shooting 5-of-9 from the floor.

The game changed drastically in the second half as KU came storming out of the locker room and used a 11-0 run in the third to extend the lead. Franklin went 5-of-5 from the line during the run with Jackson, Mayberry and Kersgieter also contributing points. In the early minutes of the half, Kersgieter surpassed her season-high with an 8-0 run of her own, stealing the ball from the Aggies for an easy layup and draining two threes. Kansas outscored the Aggies 21-8 in the third quarter.

“She was really engaged on the defensive end. We always say there is a thing called the ‘Basketball Gods’, and if you play really hard while defending and rebounding, it’s amazing how much better you play on the offensive end,” Schneider said of his senior’s performance. “I thought she was aggressive and that’s what we want her to be, creating shots for herself and others. When we had actions that involved somebody screening for her, I thought her teammates did a great job on setting physical screens.” 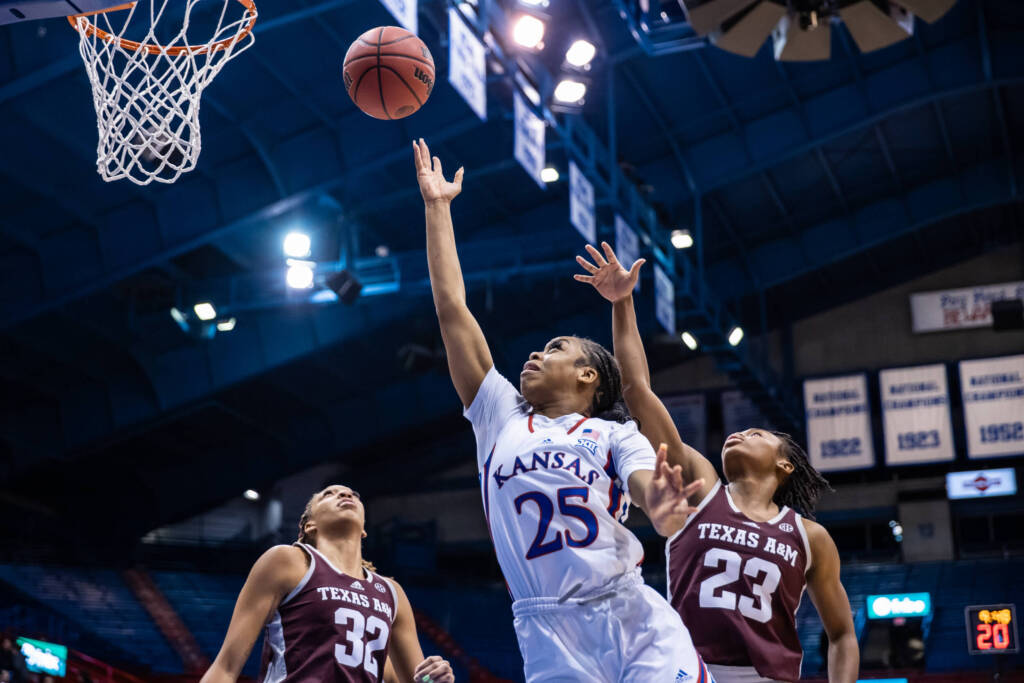 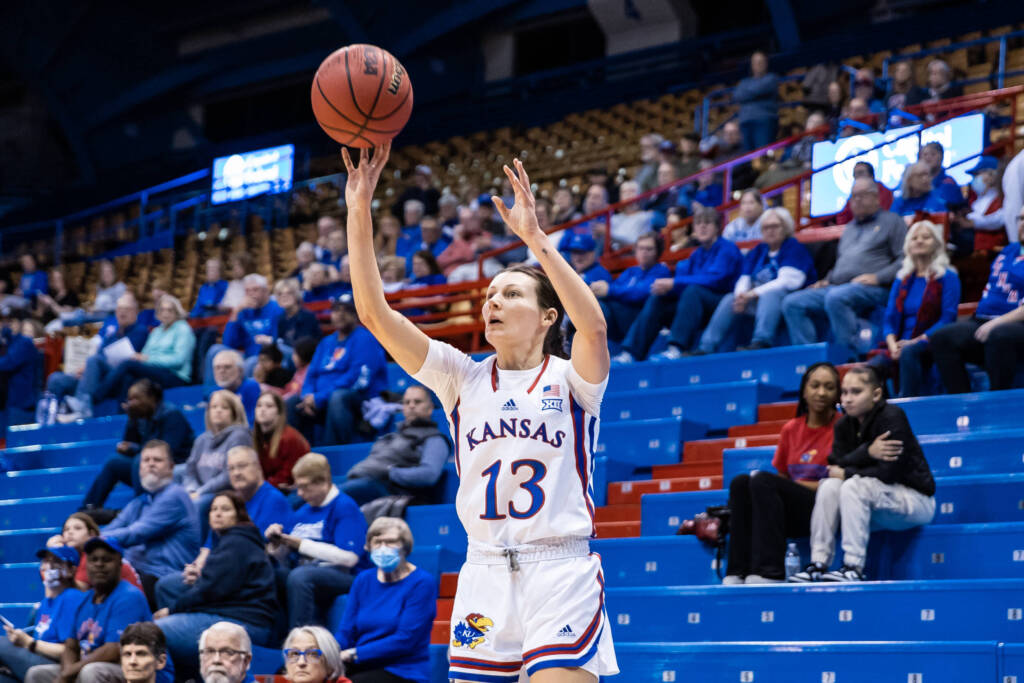 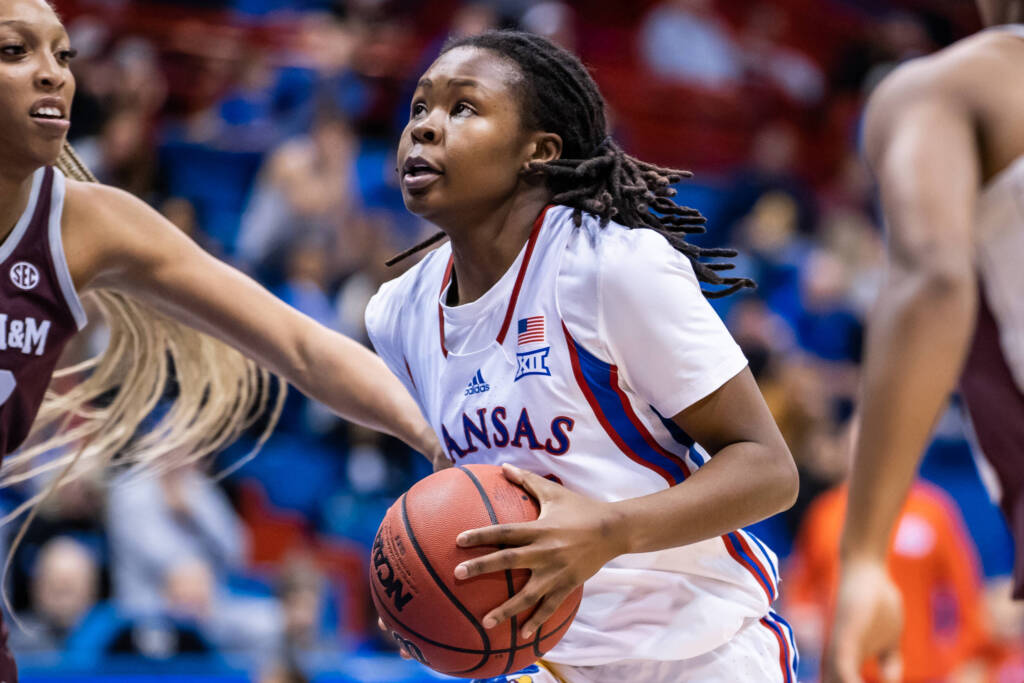 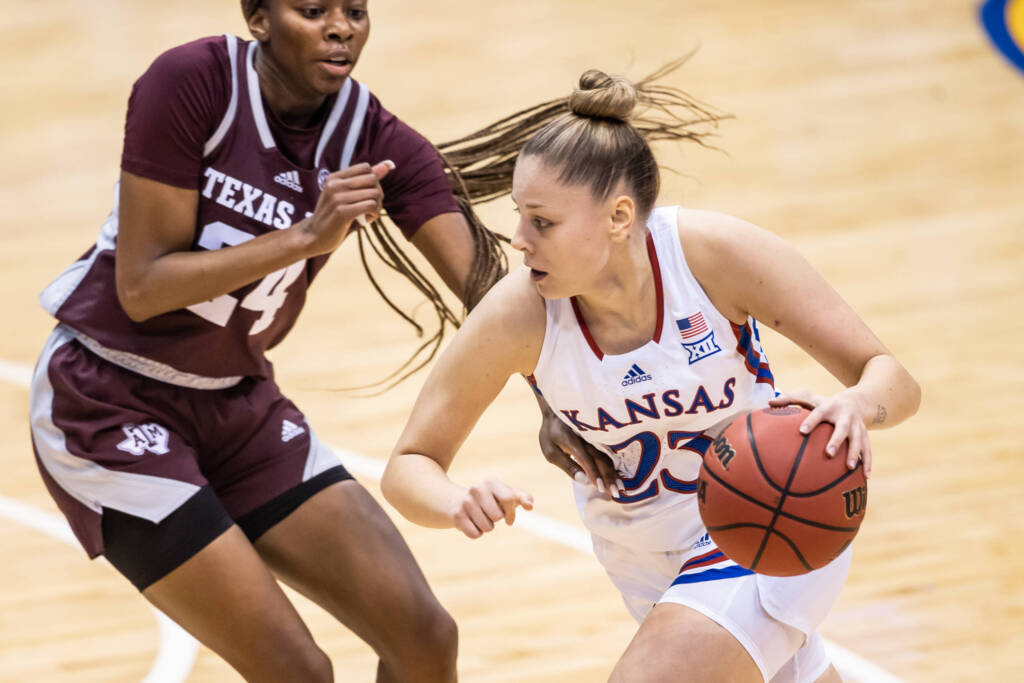 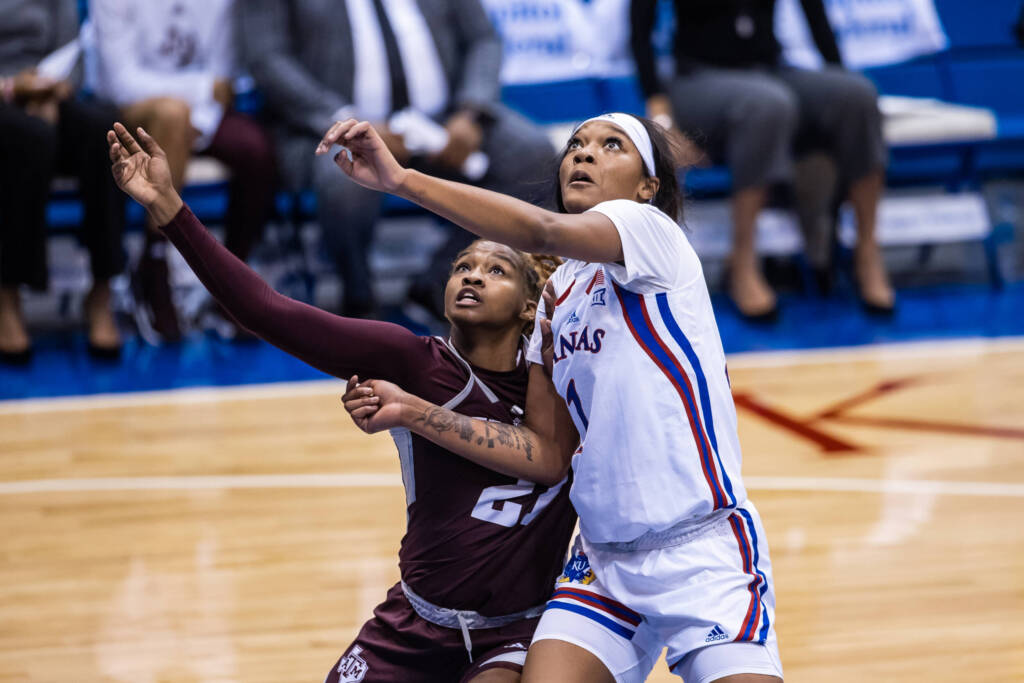 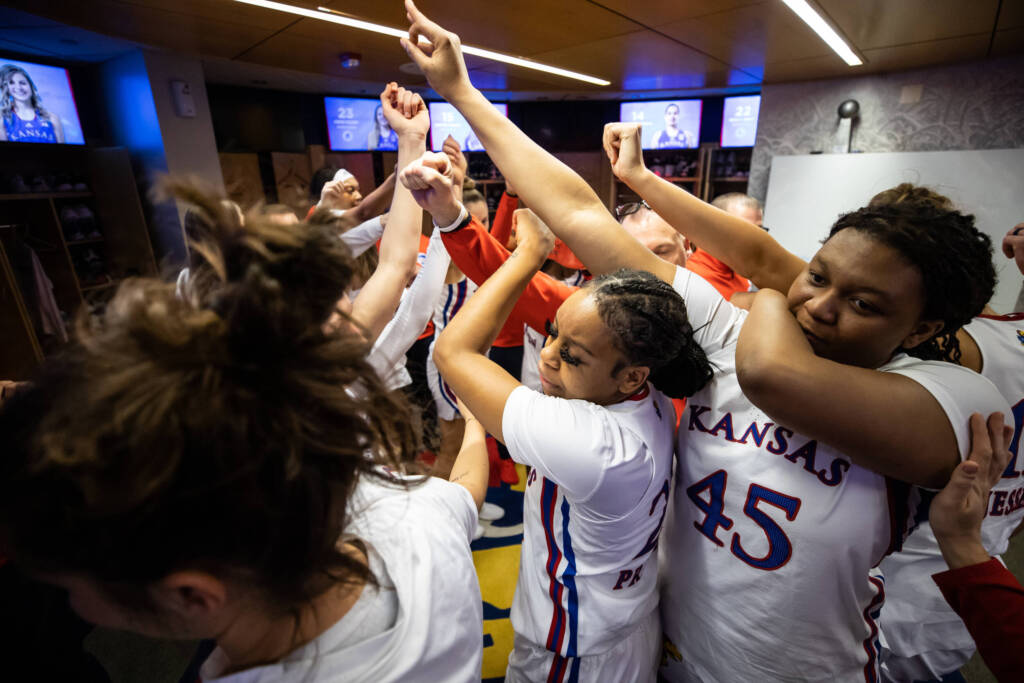 The Jayhawks outscored the Aggies 21-8 in both the third and fourth quarter Kansas drained a season-high seven threes in the game with a 41.2% shooting percentage from beyond the arc. Franklin went perfect from the line shooting 11-of-11 (100%).

Up Next
The Jayhawks open the month of December with another home game at Allen Fieldhouse on Sunday, Dec. 4 against Southeast Missouri State. Tipoff of that game is set for 2 p.m. CT and the game will be broadcast on Big 12 NOW.

Notes
Kansas won by a score of 74-42 (+32), the largest margin of victory this season.
The Jayhawks scored 7 three-pointers (7-of-17), a new season-high. Senior Holly Kersgieter led the charge, making four threes. Kersgieter finished with 23 points (9-of-16), 9 rebounds and 3 assists, scoring 12 of her points (5-of-9) in the first half. Her 23 points are a new season-high and also propelled her into 22nd on the all-time career scoring list. Kersgieter also led the team in steals with three.
Senior Taiyanna Jackson recorded 16 points and 11 rebounds, giving her four double-doubles on the year. Jackson shot 7-of-9 (77.8 percent) from the field.
Freshman Zsófia Telegdy recorded her first made three of the season, connecting with seven minutes left in the fourth quarter. Senior Zakiyah Franklin scored 15 points, going perfect from the charity stripe (9-of-9). Her nine free throws are a new season-high.
Junior Wyvette Mayberry recorded 10 points, four rebounds and two assists. That is her fourth time scoring in double-figures.