The Jayhawks were originally scheduled to host South Dakota State to open the season before it was moved to Minneapolis, Minnesota. KU was also slated to host Omaha last weekend, but due to inclement weather in the Lawrence area, it was moved to Tal Anderson Field in Omaha.

In their last time out, the Jayhawks used a doubleheader sweep on March 13 to claim the series over Omaha, 3-1. KU received quality starts in each of their three victories, including a complete-game shutout by Cole Larsen. Larsen pitched nine innings with six strikeouts to only two walks in the 9-0 victory Saturday morning. He was named Big 12 Co-Newcomer of the Week. In the series finale, Eli Davis was handed the ball and tied his season high with seven strikeouts. Kansas tallied double-digit runs for the second time this season in the 10-7 victory. Ryan Cyr started the series off with another stellar performance, pitching 6.2 innings

Skyler Messinger led the Jayhawks at the plate going 6-for-17 (.353) with five RBI, two doubles and a home run. Messinger started all four games at third and tallied 11 total bases. Dylan Ditzenberger finished the weekend 5-for-15 (.333), while continuing to be Kansas’ go to utilityman. Tavian Josenberger and Anthony Tulimero each tallied four-RBI weekends, while Tony Castonguay tallied his first hit – a home run – as a pinch hitter. 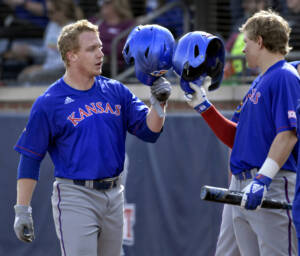 OPPONENT PREVIEW: CREIGHTON
Creighton enters the series 4-3, and had their previous series at South Dakota State last weekend canceled due to COVID in the Jackrabbit program. The Bluejays opened the season with four games in Nashville against Lipscomb and Belmont, going 2-2 with a season-opening 11-4 win over Lipscomb. CU has also played crosstown rival Omaha, winning the first two games before falling in the series finale.

Dyan Tebrake, Creighton’s probable Friday starter, leads the Bluejays in innings pitched (10.0) and strikeouts (13). Tebrake posts a 4.50 ERA and is 2-0 this season. Jonah Smith and John Sakowski are the only other two Bluejays with victories this season with Smith as CU’s probable starter for game one Saturday. In addition to Tebrake and Smith, Ryan Miller, Griffin Holderfie and Cade Lommel have all started on the mound for CU.

LARSEN | BIG 12 NEWCOMER OF THE WEEK
Cole Larsen became the first Jayhawks since Ryan Cyr vs. Texas May 4, 2019 to pitch a complete-game shutout and was named Big 12 Co-Newcomer of the Week. Larsen held Omaha scoreless in game one of the doubleheader, while striking out six to only two walks. It is Larsen’s second complete game this season and first honor of his career. Everhett Hazelwood, Ryan Cyr, Nolan Metcalf and James Cosentino join Larsen as current Jayhawks to receive a weekly honor by the conference.

2020 vs. CREIGHTON
Last season, Kansas and Creighton played a midweek game March 4, with the Jayhawks topping the Bluejays 3-2. The win improved Kansas to 6-6 on the season. Nathan Barry earned the win after pitching a scoreless inning of relief, while Jonah Ulane struck out the side in the ninth. KU captured the lead in the seventh after Nolan Metcalf laced a single to left field, scoring Casey Burnham.

UP NEXT
Kansas returns to the road for a five-game road trip, starting March 23-24 in Easton, Pennsylvania at Lafayette College. KU then opens Big 12 play at West Virginia March 26-28.