🏀 Jayhawks, No. 18/22 Mountaineers to Play Saturday

Kansas last played Wednesday, falling to Texas 61-52. Holly Kersgieter was the team leader with 15 points and tied for the team lead in rebounds (6) with Katrine Jessen. Jessen tallied career highs in points (6) and rebounds.

Kersgieter continues to maintain her team lead in points per game, averaging 17.3 points per contest. The sophomore is second on the team with 6.6 rebounds per contest behind only Ioanna Chatzileonti’s team-high 6.8. Chatzileonti also boasts a team-best 1.42 blocks per game. Kersgieter also has been dialed in from the free throw line, hitting 85.7-percent of her attempts. 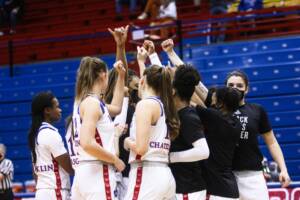 OPPONENT PREVIEW: WEST VIRGINIA
West Virginia enters the Saturday clash 17-4 and 11-4 in Big 12 action. WVU is 4-2 on the road this season and last played Wednesday in Ames, Iowa against Iowa State, falling to the Cyclones, 85-68. The Mountaineers are 2-2 in their last four games.

Kari Niblack leads the WVU defense with 1.81 blocks per game and is the team leader in field goal percentage, making 53.6-percent of her shots.

UP NEXT
Kansas heads to Ames, Iowa for its final road contest of the season against the Cyclones March 3 at 6:30 p.m. The game will be broadcast on Big 12 Now on ESPN+.