LAWRENCE, Kan. –Kansas is slated to open its 2021 season with a three-game series against South Dakota State at U.S. Bank Stadium in Minneapolis, starting Friday.

The Jayhawks and Jackrabbits are both playing for the first time in 11 months. Both teams had their 2020 seasons cut short due to the COVID-19 pandemic.

Kansas and South Dakota State last played in 2007 and the Jayhawks hold a 6-1 edge over the Jackrabbits all-time. The last time the two squads played was in 2007. KU won the series after dropping the opening game of the series, which was also played in Minneapolis.

The Jayhawks’ probable starters for the series are Ryan Cyr in the season opener Friday, Everhett Hazelwood on Saturday and Eli Davis on Sunday. 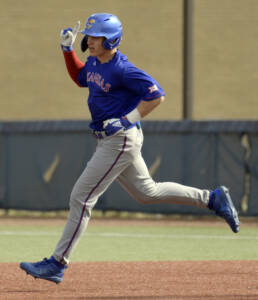 RITCHIE PRICE | SOUTH DAKOTA STATE HEAD COACH
Ritchie Price spent three seasons as the South Dakota State head coach from 2007-11. He finished with 102-71 overall record and an appearance in the Summit League Championship three-straight years. At the time of his hire, Price was the youngest head coach at the Division I level. In 2011, his team become the first team outside of Oral Roberts to record 20 Summit League victories.

RETURNING ROSTER
Kansas returns its top two hitters from last season in Anthony Tulimero and Casey Burnham. Tulimero led Kansas with a .314 average, and had a team-high 16 hits. Tulimero was tied with fellow returner Nolan Metcalf for the team lead with 10 RBI. Burnham was second on the team with a .265 average, recording a team-high six doubles. Joining the trio are Skyler Messinger, James Cosentino, Jack Wagner and Dylan Ditzenberger, who all started in eight or more games last season. Cosentino and Messinger are the only two returners that started all 17 games last season.

UP NEXT
Kansas returns to the road to play Florida Gulf Coast Feb. 26-28 for a four-game series in Fort Myers, Florida.