LAWRENCE, Kan. – Five Jayhawks finished in double-figures on Monday as Kansas women’s basketball remained undefeated with its 83-64 victory over Wofford inside Allen Fieldhouse. The 11-0 record through nonconference play is the best start under head coach Brandon Schneider since he took over the Kansas program in 2015.

Freshman guard Holly Kersgieter provided a spark off the bench for the Jayhawks, finishing with a team-high 21 points on 8-of-14 shooting from the field. She also knocked in a career-high five 3-pointers on the night. Following Kersgieter was senior Mariane De Carvalho who poured in 18 points on 8-of-10 shooting and was a team-high +28 in the contest.

The team also used a well-balanced passing attack against Wofford as KU finished the game with a season-high 23 assists. Sophomore Brooklyn Mitchell led the way as she finished with a career-best nine assists on the night to go along with her 16 points.

Kansas jumped out to a 22-13 lead to end the first quarter, but the Terriers utilized an 8-0 run late in the second quarter to bring the game within single digits at 38-34 entering halftime.

In the second half, it was all Jayhawks as they would outscore Wofford 55-30 over the final two quarters. KU put together a 12-0 run early in the third quarter to push its lead up to 15 and was able to ride that momentum through the remainder of the contest.

Kansas will open up Big 12 Conference play on the road Saturday, Jan. 4, when it travels to Stillwater, Oklahoma, to take on Oklahoma State. Tipoff is set for 2 p.m. and can be viewed on Big 12 NOW on ESPN+.

The 𝓈𝓌𝑒𝑒𝓉 sound of @holly_homi3 tearin' the bottom of the net!

Mitchell finds the lane for an easy put-in!

The pass from Mitchell → a layup for Thomas 👊 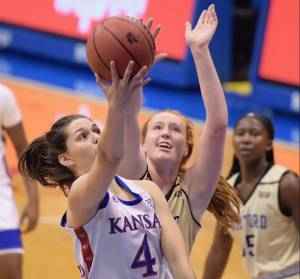 Mariane De Carvalho leads all scorers after the first quarter with 10 points!