After Iowa State held the halftime lead, Kansas stormed out of the gate in the second half, scoring 32 points to take the lead heading into the final frame. Iowa State tied the game at 68 with 7:33 left in the game and took the lead on the next possession. Kansas cut into the Iowa State lead, but were unable to overcome the Cyclone offense.

Franklin was joined in double-figures by Holly Kersgieter, Chandler Prater and Ioanna Chatzileonti. Kersgieter finished with 18 points and marked her seventh-consecutive game with double digits. She is the team leader in points per game (16.7) and steals per game (1.61), while ranking second with 6.1 rebounds per game. Chatzileonti tallied 11 points and boasts a team-high 7.4 rebounds per contest. Franklin is the Jayhawks’ team leader in assists per game (3.68). 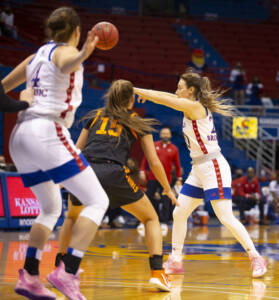 Vivian Gray played all 40 minutes against Oklahoma State and is the team leader in points per game (18.9), blocks per game (1.62), assists per game (3.10) and rebounds per game (8.4). Gray and Gordon are the only two Lady Raiders to have started all 21 games this season.

Texas Tech is on a three-game losing streak and last won against Kansas State Feb. 3, 83-75. In that game. Gray tallied 28 points, 10 assists and six rebounds.

UP NEXT
The Jayhawks return to Allen Fieldhouse to host Texas Wednesday, Feb. 24 at 7 p.m.