Sophomore guard Brooklyn Mitchell led the team in scoring with a career-high 23 points on 10-of-13 (76.9 percent) from the field.

Kansas jumped out to a 9-2 lead starting with sophomore guard Aniya Thomas converting on an and-1 in the first 12 seconds of the game. The Jayhawks kept the lead and went on an 11-2 run in the last 3:12 of the quarter led by sophomore guard Brooklyn Mitchell, who had a career-best 11 points in the opening period. Kansas led 24-10 entering the second quarter.

The Jayhawks will travel back to Lawrence and get ready to host Florida on Sunday, Dec. 8, at 2 p.m. CT in Allen Fieldhouse.

Jayhawks are heatin' up the fourth quarter as Mitchell has 21 points, Thomas 19 and Stephens 15 with 14 boards!

🚨 Mitchell connects from behind the arc and collects 1️⃣8️⃣ points on the game so far breaking her previous career-high of 15 points.

Stephens has 13 points and 11 rebounds… and counting! 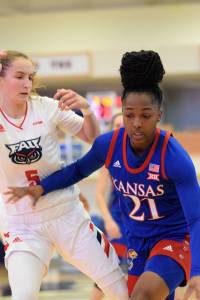 Sophomore guard Brooklyn Mitchell leads all scorers with 11 points on 5-of-5 shooting from the field after the first quarter.

FAU calls a TO to figure things out!

Jayhawks going strong in the first 3 mins of play!

Let's get to work! pic.twitter.com/CFadedSgkq