LAWRENCE, Kan. – Kansas women’s basketball hosts No. 6/6 Baylor for its regular season finale Saturday at 4 p.m., Allen Fieldhouse. The game will be broadcast on Big 12 Now on ESPN+.

Holly Kersgieter was the lone Jayhawk to tally double-figure points, finishing with 12. She added her third double-double of the season with 11 rebounds.

Kersgieter is the Jayhawks’ leader in points per game (16.8) and is tied for the team lead in rebounds per game (6.8) with Ioanna Chatzileonti. Chatzileonti blocked four shots against the Cyclones, a Big 12 high for the freshman, and averages 1.52 blocks per contest. Aniya Thomas has continued her hot streak, tallying 28 points in Kansas’ last two games. Thomas rattled off the first eight points for KU against the Cyclones. She is the team leader with 1.78 steals per contest. 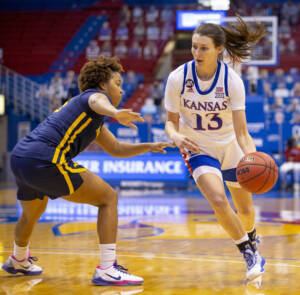 UP NEXT
Kansas makes the short trip to Kansas City, Missouri for the 2021 Phillips 66 Big 12 Championship. Following the conclusion of games this weekend, Kansas will know its seeding and when it plays in the tournament.