ARLINGTON, TEXAS – For the first time in the Ritch Price era, the Kansas Jayhawks will match up with UT-Arlington. The two teams haven’t faced each other since 2000 and the series is split at six wins apiece. The Jayhawks enter tonight’s game with a 21-15 mark, while UTA enters at 16-20 after dropping a 3-1 decision to No. 8 TCU on Tuesday.

The Jayhawks are coming off a thrilling 3-2 win over Baylor on Sunday at Hoglund Ballpark. Maui Ahuna delivered a walk-off hit in the bottom of the ninth to give Kansas the one-run win over the Bears. Kansas led 2-1 heading into the ninth, but a leadoff home run from Andy Thomas quickly tied the game. However, in the bottom of the ninth, Ahuna delivered a line drive single to left to score Dylan Ditzenberger.

The Jayhawks and Mavericks will of course match up in a non-conference game. Kansas enters tonight’s game having won 12 straight non-conference games, dating back to March 13 against Omaha. Kansas took two straight from Omaha, swept Creighton in a four-game series, took one apiece from Lafayette and Missouri, before taking two apiece against Texas Southern and Air Force.

True freshman centerfielder Tavian Josenberger enters tonight’s game with an 18-game hitting streak after getting one hit in each of the three games against Baylor last weekend. Josenberger has also reached base safely in 23 straight games. The freshman is the team’s leading hitter at .349 and also has committed just one error in center and has a fielding percentage of .990. The last time Josenberger didn’t have a hit was on March 21 against Creighton. During his 18-game hitting streak, Josenberger has raised his batting average 75 points. 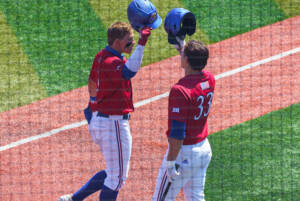